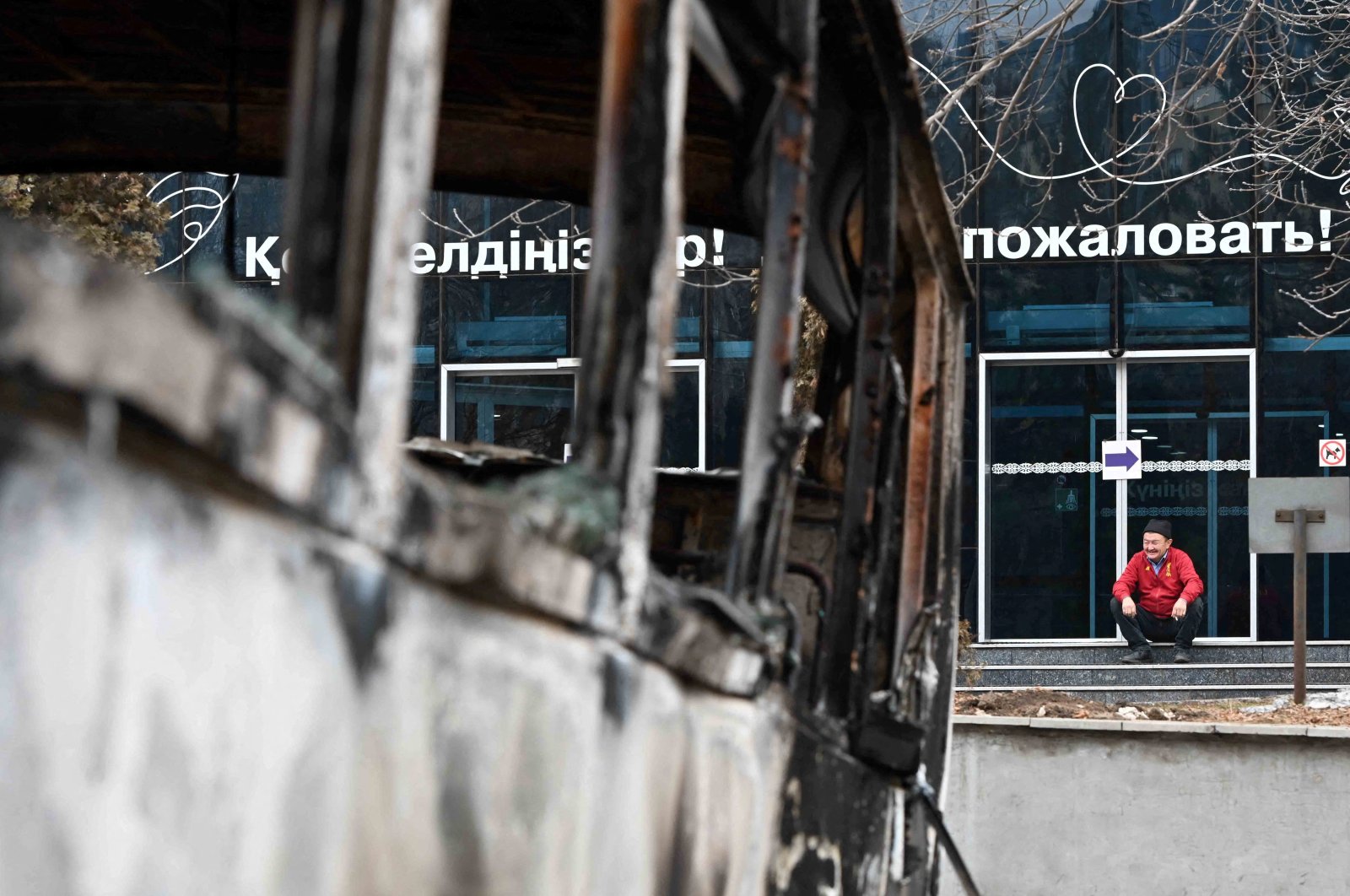 A man sits on the steps of a building as a vehicle, which was burnt during mass protests triggered by fuel price increase, is seen in the foreground, in Almaty, Kazakhstan, Jan. 9, 2022. (Reuters Photo)
by Agencies Jan 10, 2022 10:05 am

Life appears to be returning to normal in Kazakhstan's largest city Almaty, with security forces having detained a total of 7,939 people as of Jan. 10 over the worst bout of violence in the Central Asian nation's post-Soviet history

Nearly 8,000 people have been detained in Kazakhstan, the Interior Ministry said Monday as the nation observed a day of mourning after clashes that left dozens dead and the financial hub of 1.8 million people reeling.

"As of January 10, 7,939 people have been detained," the ministry said in a statement, noting that several branches of the country's security services had been involved in the detentions.

The situation in Kazakhstan has stabilized and is now under control, the Central Asian country's National Security Committee said on Monday, adding that "hotbeds of terrorist threats" have been neutralized. It said in a statement that the country, including government and military facilities, was fully under the control of security services.

"Areas where militants and rioters might be hiding are being cleared. Evidence of criminal activity is being collected and recorded," the statement read.

The country's largest city was back online and appeared to be returning to normal on Monday. Almaty, the country's former capital, had been nearly completely offline since Wednesday, but local and foreign websites were accessible again Monday morning, following the worst unrest in the ex-Soviet republic's independent history.

Security forces have set up checkpoints around the city. Smashed windows, gutted cash machines and torched buildings bore witness to the destruction. The main Republic Square remained sealed off.

Reuters saw two military vehicles with mounted machine guns driving toward the square. Most of the dozens of civilian and police cars torched during the unrest had been removed. Supermarket chain Magnum said 15 of its 68 stores in Almaty had been looted. A shopping mall's staff told Reuters that video cameras showed looters attacking an ATM, changing into stolen clothes at the stores and walking out wearing two or three coats.

"The situation has been stabilized in all regions of the country," the presidential office said, adding law enforcement agencies had seized back control of administrative buildings. "The counter-terrorist operation... will be continued until the complete elimination of the terrorists," Deputy Defense Minister Sultan Gamaletdinov said, according to remarks carried by Reuters.

Authorities on Monday for the first time linked the violence to what they said were members of extremist groups.

"As the events in Almaty and several other regions of the country have shown, Kazakhstan has been subjected to armed aggression by well-coordinated terrorist groups trained abroad," the Foreign Ministry said in a statement, adding that preliminary data had pointed to the participation of individuals from "radical groups" with military combat experience. It did not name any specific groups.

Yerkin Zhumabekov, a mall manager, said: "They arrived in cars with no number plates at night, they destroyed everything. They took everything they could, shoes, clothes, cosmetics."

Kazakh President Kassym-Jomart Tokayev said on Monday that his country had weathered an attempted coup d'etat coordinated by what he called "a single center". In a speech to an online meeting of the Russian-led Collective Security Treaty Organization (CSTO) by video link, Tokayev said that order had now been restored in Kazakhstan, but that the hunt for "terrorists" was ongoing.

"Under the guise of spontaneous protests, a wave of unrest broke out. It became clear that the main goal was to undermine the constitutional order and to seize power. We are talking about an attempted coup d'etat," he said. "The main blow was directed against (the city of) Almaty. The fall of this city would have paved the way for a takeover of the densely populated south and then the whole country," he said. "Then they planned to seize the capital."

Tokayev said that a large-scale "counter-terrorism" operation would soon end along with a CSTO mission that he said numbered 2,030 troops and 250 pieces of military hardware. He defended his decision to invite Russian-led troops into the country and said that doubts over the legitimacy of that mission stemmed from a lack of information. Kazakhstan would soon provide proof to the international community about what had happened, he said.

During a meeting with the leaders of other former Soviet countries, Tokayev said his security forces would not shoot protesters rallying peacefully.

"We have never fired and will never fire on peaceful demonstrators," he said.

Meanwhile, Russian President Vladimir Putin said Monday that a Moscow-led military detachment deployed to counter unrest in Kazakhstan would remain in the Central Asian country for only a "limited" period.

"A contingent of CSTO peacekeeping forces has been sent to Kazakhstan – and I want to emphasize this – for a limited time period," Putin said during a meeting of leaders from ex-Soviet countries, during which he added that Kazakhstan had been targeted by "international terrorism" and vowed that Russia would not allow "color revolutions" in the region.

Besides Russia and Kazakhstan, Armenia, Belarus, Kyrgyzstan and Tajikistan are also members of the alliance. According to the Deutsche Presse-Agentur (dpa) the organization has said it wants to remain in the country until the situation is "completely stabilized."

Kazakhstan has framed the violence in Almaty as an attack by "terrorist groups" and expressed displeasure at foreign media coverage of the events, which began with protests over a fuel price hike in the west of the country on Jan. 2. On Monday the government said foreign media reports had created "the false impression that the Kazakhstan government has been targeting peaceful protestors."

"Our security forces have been engaging with violent mobs who were committing brazen acts of terror," the Foreign Ministry said in the statement.

On Sunday evening Kazakhstan's Ministry of Information and Social Development retracted a statement that had appeared in an officially run Telegram channel earlier that said more than 164 people had died in the unrest. Two private websites that had reported the news said the information ministry had told them the statement was the result of a "technical mistake." Officials previously said 26 "armed criminals" had been killed and that 16 security officers had died.

Nur-Sultan, the city that replaced Almaty as capital in 1997 and renamed in honor of 81-year-old founding President Nursultan Nazarbayev in 2019, saw comparatively little unrest.

The crisis comes with tensions between Moscow and the West at post-Cold War highs over fears of a Russian invasion of Ukraine, with talks between Russia and the U.S. to take place in Geneva on Monday after a working dinner on Sunday evening. Russia has ruled out any concessions at the talks.

Tokayev has thanked the Moscow-led CSTO for answering his request for help and sending a detachment of 2,500 troops to the country. Tokayev says the deployment will be temporary, but U.S. Secretary of State Antony Blinken warned on Friday that, "Once Russians are in your house, it's sometimes very difficult to get them to leave."

While the precise contours of the political crisis that engulfed Kazakhstan are unclear, it is evident that the ruling elite has been roiled.

On Saturday, authorities announced the arrest on treason charges of Karim Masimov, a high-profile Nazarbayev ally who was dismissed from his post as security committee chief at the height of the unrest.

The president's website also announced the sackings of Marat Osipov and Daulet Ergozhin as deputy heads of the National Security Committee. It gave no explanation in a terse statement late on Sunday. Authorities have not disclosed any details of the allegations against Masimov. He and his lawyer could not be reached for comment.

Nazarbayev, who was widely regarded as holding the strings in the oil-rich Central Asian country despite stepping down from the presidency in 2019, has not spoken in public since the crisis began. His press secretary said on Twitter Saturday that Nazarbayev was in "direct contact" with Tokayev and called on Kazakhs to "rally around" the president.

"(He) and the head of state have always been 'on the same side of the barricades'... In these difficult days, they have demonstrated the monolithic nature of state power for all of us," the statement from Nazarbayev's spokesperson said, calling for people to rally around Tokayev.

Nazarbayev hand-picked Tokayev as his successor after ending his more than a quarter-century as the head of state. Tokayev's spokesperson said Sunday that he was "taking decisions independently... not running to consultants."

Former Prime Minister Akezhan Kazhegeldin told Reuters that Tokayev needed to dispel doubts about who was really in charge.

"I think a lot of people in social networks, critics, continue to say he's a nominee of Nazarbayev, that Nazarbayev is standing behind his back and manipulating him," he said. "Now he has complete formal executive power, the question is how he will deploy it. He needs to take command."

Tokayev is likely to name new government members when he addresses parliament on Tuesday, his spokesperson said. He awarded prizes for bravery to 16 police and army officers killed in the violence.