Turkish Cypriots do not have another 50 years to lose: Turkey's VP 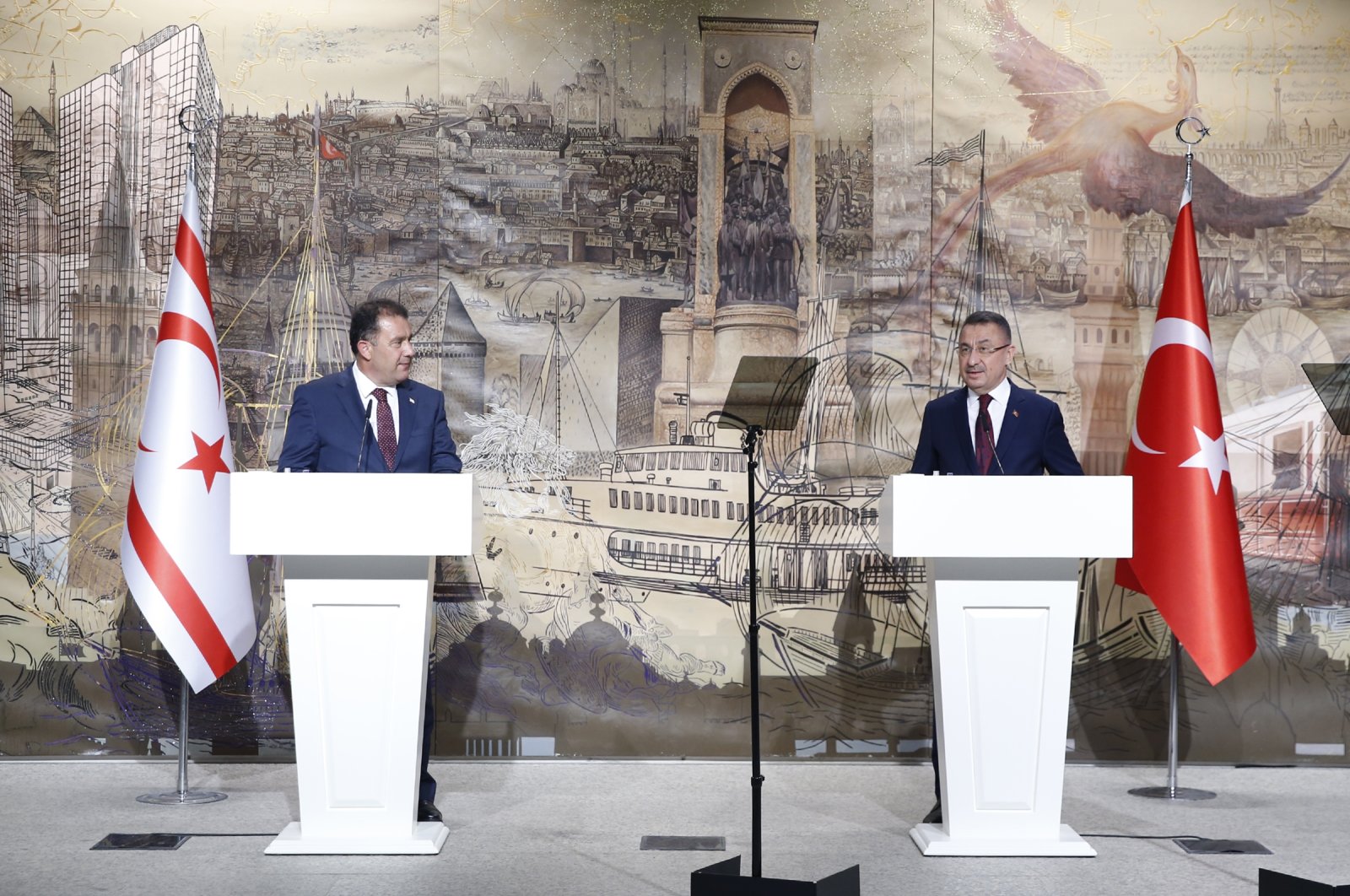 Vice President Fuat Oktay reiterated the need for a two-state solution to solve the decadeslong issue on the island of Cyprus, as he said the island's Turkish population does not have another five decades to waste and will not accept a federal solution

Turkish Cypriots do not have another 50 years to waste and deserve equal recognition, Turkey’s Vice President Fuat Oktay said Wednesday.

Speaking after a meeting with Turkish Republic of Northern Cyprus (TRNC) Prime Minister Ersan Saner in Istanbul, Oktay said the Turkish side has been striving to ensure that the Cyprus issue is permanently resolved in a sustainable manner.

“However, this positive stance has never echoed with the Greek Cypriot side in any period,” Oktay said, adding that the Turkish Cypriots have wasted 50 years due to the other side’s attitude.

The Turkish vice president continued by reiterating the need for two sovereign states for the two nations living on the island, as he said Turkish Cyprus's proposal presented in Geneva was the most realistic example of a solution. He also urged the international community to review its support for the Greek Cypriot administration and take into consideration TRNC’s proposal.

“Otherwise, it will further encourage the Greek Cypriot administration, which rejected the Annan plan in 2004 and was awarded European Union membership, to maintain its irreconcilable attitude,” Oktay said.

Noting that the opening of the closed town of Varosha (Maraş) was in line with international law, Oktay said the TRNC aims to eliminate past aggrievements rather than create new ones.

Regarding the issue of the Eastern Mediterranean, Oktay said Turkey is determined to protect the TRNC and its own interests in the region.

“Turkey has shown that it is determined to protect its own rights in its own continental shelf and the Turkish Cypriots, who have equal rights on the island of Cyprus. This determination still exists today,” Oktay said. He noted that Turkish Cyprus would use its rights if the Greek Cypriot administration decided to resume activities and that Turkey and Turkish Cyprus would not leave Greek Cypriots’ provocative steps unanswered.

The Eastern Mediterranean, with Cyprus as a key actor, has been one of the main issues of dispute between Turkey, the EU and Greek Cypriots last year.

Meanwhile, Saner thanked Turkey for standing by Turkish Cyprus in all circumstances, as he said Turkey would continue to conduct exploration in the area dubbed the “Blue Homeland.”

“Nobody can prevent us from carrying out gas exploration in the Eastern Mediterranean as long as Turkey stands with us,” Saner said, as he said he agrees with Oktay’s remarks on Turkish Cypriots not having another five decades to lose.

The Turkish Cypriot prime minister continued by saying that they will continue to seek a two-state solution on the island despite the “unjust attitude of the world.” He noted that they would not accept any solution besides it and said it was about time to say stop to the global community’s unjust stance, which awarded the Greek Cypriots for rejecting the Annan Plan and punished the Turkish Cypriots for accepting it, even though they had said otherwise before the plan was voted.

Regarding Varosha, Saner said Turkish Cyprus had paved the way for property owners in the area to utilize their properties, in line with European human rights laws.

During the TRNC Council of Ministers meeting on June 18, 2019, it was decided to take steps to open Varosha, which had been closed since 1974, and to conduct a scientific inventory study with an expert team.

A part of the public Democracy Street and the beach part of Varosha, within the borders of Turkish Cyprus, was opened on Oct. 8, 2020.

TRNC Prime Minister Ersan Saner visited the region – which was demilitarized by the decision of the Council of Ministers on July 12, 2021 – on July 26, 2021, within the scope of the second phase of the Varosha opening, and conducted inspections.

Saner, in his statement there, said: "With the decision taken by our government, we have provided the opening of 3.5% of our closed Varosha region with the second stage as of now. In this context, 337 property owners have been submitted to the Property Arrangement Commission (immovable property commission) for the total of closed Varosha. In the region taken out of the restricted military zone, 36 people have applied to obtain their property from the commission by means of exchange, compensation or return. The cases will be evaluated, and decisions will be made by the commission."

Most recently, the United Nations Security Council (UNSC) condemned the decision by Turkey and Turkish Cyprus to reopen a residential section of the abandoned suburb last week and called for its “immediate reversal," warning that it could raise tensions on the divided Mediterranean island.

In response, Turkey's Foreign Ministry Friday rejected the UNSC's statement as well as the "unfounded claims" of several countries on the reopening of Varosha in Turkish Cyprus.

Varosha was partially reopened to the public on Oct. 8, 2020, after decades as a ghost town. It was abandoned after the UNSC passed Resolution 550 on May 11, 1984, which said the town could only be resettled by its original inhabitants. Located in Turkish Cyprus, entry into the town was forbidden except for Turkish army personnel stationed in Turkish Cyprus.

The island has been divided since 1964, when ethnic attacks forced Turkish Cypriots to withdraw into enclaves for their safety.