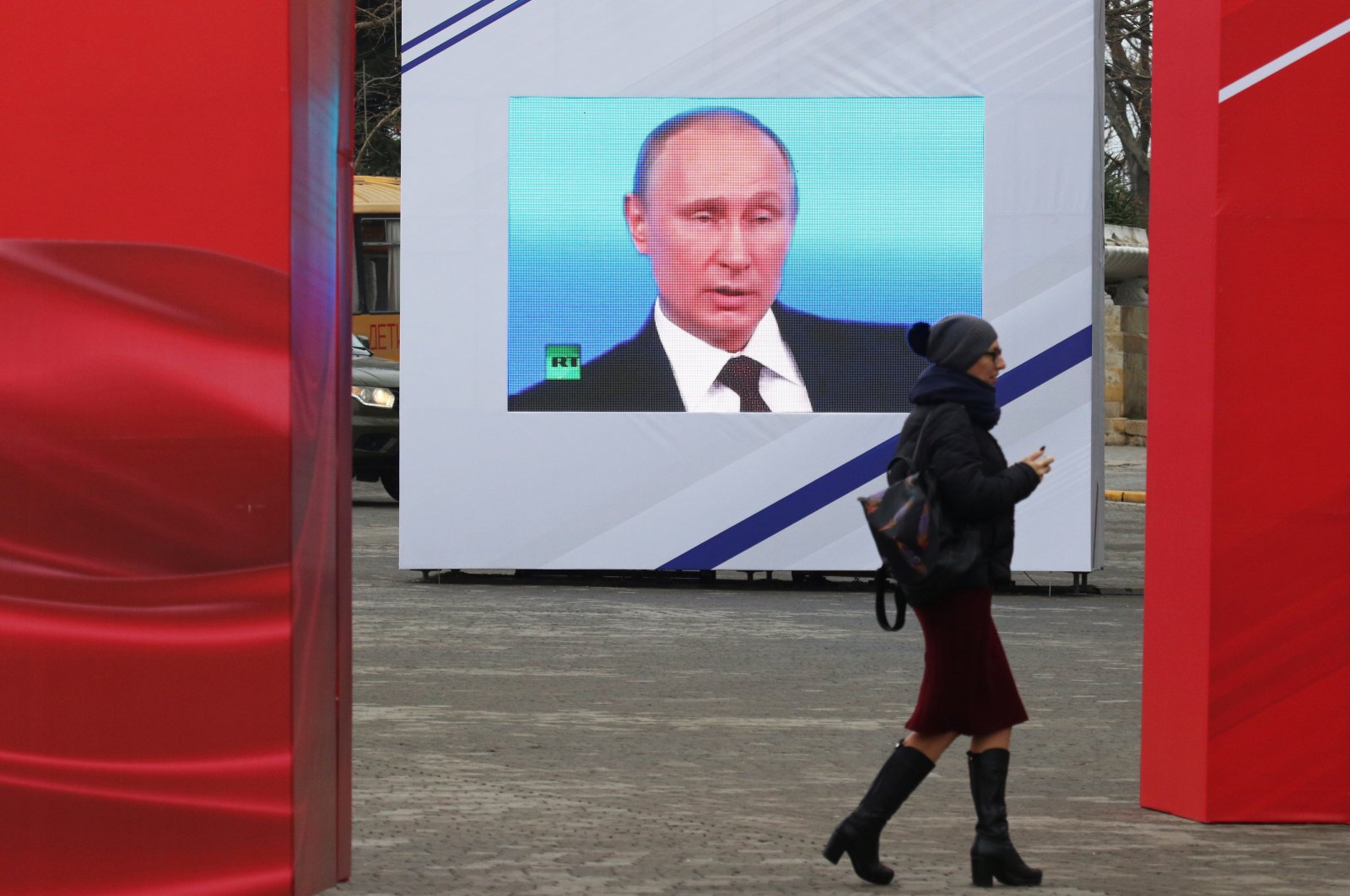 A woman walks past a screen showing Russian President Vladimir Putin during celebrations of the Defender of the Fatherland Day in Sevastopol, Crimea, Feb. 23, 2021. (REUTERS Photo)
by DAILY SABAH WITH AA Feb 24, 2021 11:43 am
RECOMMENDED

The United Nations has failed many times to maintain international peace and order, as in the case of the illegal annexation of Crimea, which Turkey "has not and will not recognize," a senior Turkish diplomat said Tuesday.

Kıran underlined that Turkey has repeatedly and vehemently denounced the "illegal annexation of Crimea."

During a joint press conference last year with his Ukrainian counterpart Volodymyr Zelenskiy in the capital Ankara, President Recep Tayyip Erdoğan had also reiterated Turkey's determination not to recognize the illegal annexation of Crimea, saying Turkey has and always will support Ukraine’s sovereignty and territorial integrity, including over Crimea.

Referring to the Crimean Tatar population with whom Turkey has unique, historical relations and ties, Kıran said Russian annexation of the peninsula in 2014 worsened their plight significantly.

"Today, leaders of the Tatar community are not allowed to enter their historical homeland. Unjustified legal procedures and illegal detentions targeting Tatars of Crimea are intensifying," he said.

Against this background, the international community should put in more effort to protect Crimean Tatar's rights, Kıran added.

Moscow annexed the Crimean peninsula from Ukraine after an independence referendum in 2014, following the ouster of Ukrainian President Viktor Yanukovych as a result of the Euromaidan protests. It has supported separatist rebels in eastern Ukraine in a six-year war that has killed nearly 14,000 people. The U.N. General Assembly (UNGA) later voted to proclaim the Russian action illegal, as did an overwhelming majority of U.N. member states, including Turkey.

In December 2020, the U.N. approved a new resolution urging Russia to immediately withdraw all its military forces from Crimea “and end its temporary occupation of the territory of Ukraine without delay.” The measure, which is not legally binding but a reflection of world opinion, was supported by Western nations and their supporters and opposed by Russia and its supporters, including China, Cuba, Venezuela, Iran and Syria. The resolution condemned the occupation of Crimea and the city of Sevastopol by Russia and reaffirmed “the non-recognition of its annexation.” It affirmed that “the seizure of Crimea by force is illegal and a violation of international law," and said it must be “immediately returned.”

Crimean Tatars are a Muslim Turkic community indigenous to the Black Sea peninsula. Most Crimean Tatars opposed Moscow's annexation of the Crimean Peninsula in 2014 and subsequently Russian authorities have cracked down on the community, banning their assembly and television channel as well as detaining and jailing dozens of activists.