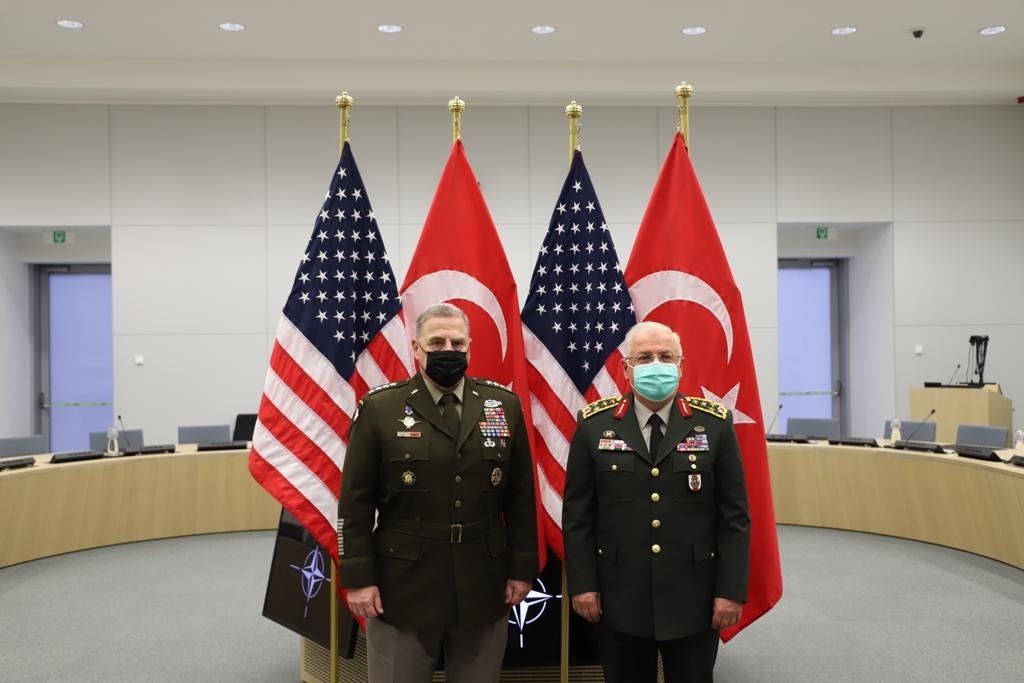 Turkish and United States top generals met in Brussels late Tuesday to discuss the “importance of U.S.-Turkish cooperation,” a statement from the U.S. Joint Chiefs of Staff said.

“Chairman of the Joint Chiefs of Staff Gen. Mark A. Milley met with Chief of the Turkish General Staff Gen. Yaşar Güler today in Brussels, Belgium,” the statement said.

“The two leaders met while attending the Military Committee in Chiefs of Defence Session at NATO Headquarters,” it added.

“They discussed the importance of U.S.-Turkish cooperation.”

The statement also underlined Turkey’s importance as a NATO ally.

“Turkey is a key NATO ally and the U.S. values its strategic bilateral relationship,” it added.

The statement’s tone indicated a possible thaw in relations between the two NATO allies, which have been strained over American support to PKK terrorist group’s Syrian wing YPG, Turkey’s acquisition of Russian S-400 missile defense system, and the apparent U.S. reluctance to discuss extradition of the Gülenist terror group’s (FETÖ) leader Fetullah Gülen, who has been living in self-imposed exile in Pennsylvania since 1999, amid other issues.

Furthermore, U.S. President Biden described the deaths of Ottoman Armenians during World War I as "genocide" in a recent statement, becoming the first U.S. president to use the controversial term.

Biden's remarks came in a customary statement on the anniversary, a day after informing his Turkish counterpart President Recep Tayyip Erdoğan that he would go ahead with this step and was seeking to limit the expected uproar from the NATO ally.

"We remember the lives of all those who died in the Ottoman-era Armenian genocide and recommit ourselves to preventing such an atrocity from ever again occurring," Biden said. "And we remember so that we remain ever-vigilant against the corrosive influence of hate in all its forms," he said.