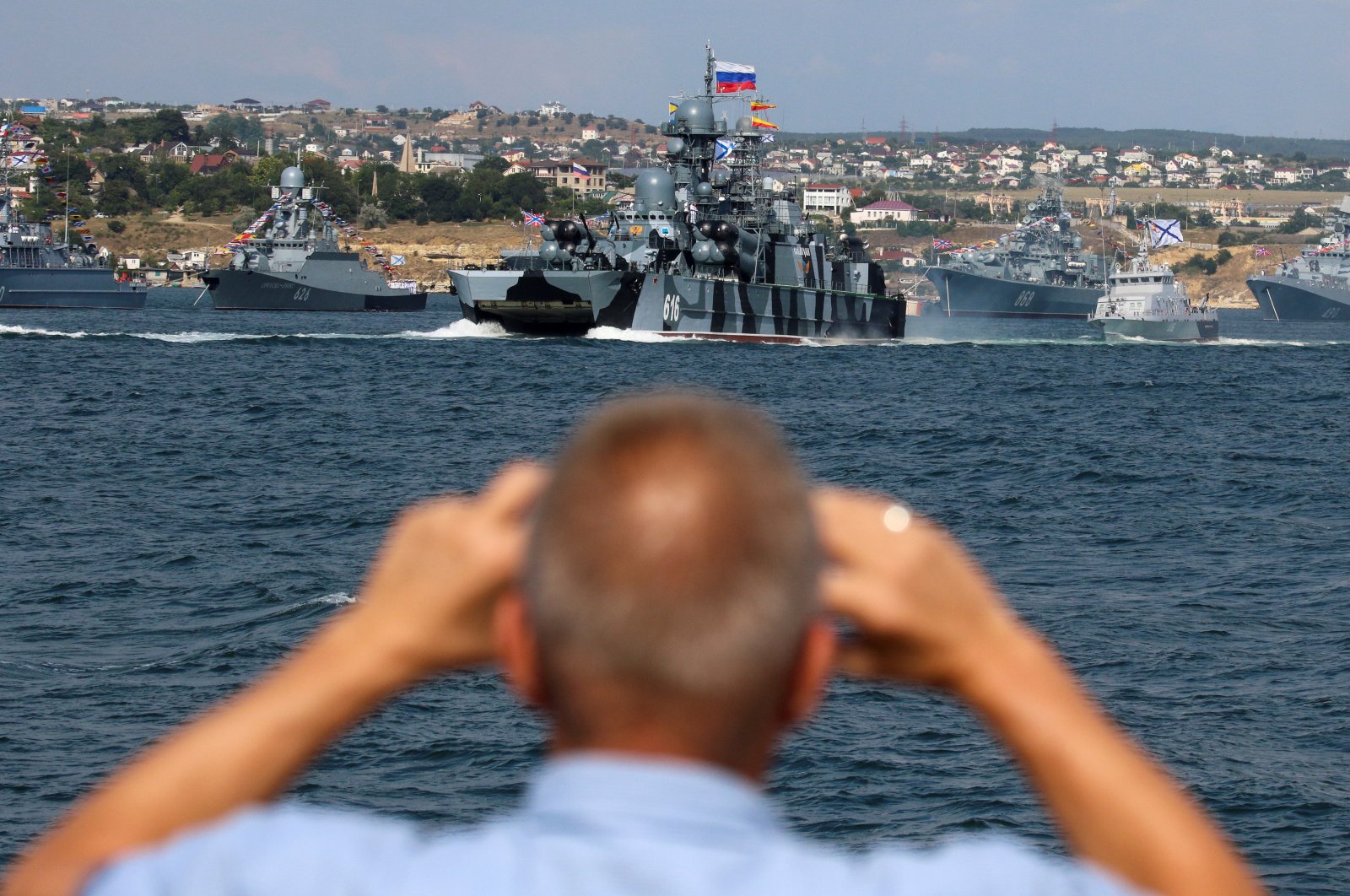 A man films the Russian Navy's warships ahead of the Navy Day parade in the Black Sea port of Sevastopol, occupied Crimea, July 23, 2021. (REUTERS Photo)
by DAILY SABAH WITH AA Aug 16, 2021 11:12 am
RECOMMENDED

Turkey is one of the most active supporters of the Crimea issue on the international level, Ukraine's Deputy Foreign Minister Emine Dzhaparova said Monday, expressing her hope that the upcoming Crimean Platform will strengthen global efforts for liberation of the region.

Dzhaparova evaluated the Crimean Platform, which will be held next Monday, while speaking to Anadolu Agency (AA).

Indicating that the Crimean Platform is a new tool for coordinating international efforts aimed at ensuring the territorial integrity of Ukraine, Dzhaparova also stated that they aim to put the Crimea issue back on the world's agenda with the platform.

"The invasion of Crimea remains a shining example of Ukraine's wound and the fragility of the world's security system. This unprecedented international security problem requires intense national and international effort and mechanisms to address this issue," she said.

In the context of Russia's actions, Dzhaparova stated that it was a success that the summit will be held with Ukraine's initiative, adding: "Developing the policy of not recognizing the annexation of Crimea, strengthening the effect of sanctions, protecting human rights and freedoms in the temporarily occupied Crimea, limiting the militarization of the peninsula will be a priority."

Noting that they expect the political leg of the platform to be held every two to three years in order to evaluate the results of the activities and determine future goals, Dzhaparova said: "The summit will only be the beginning of the main work. A joint statement is expected to be accepted (that) will formalize the items agreed within the scope of the summit."

Noting that the platform does not aim to replace the task carried out by international organizations, Dzhaparova said: "However, we hope that the leadership and coordination to be formed with the platform will strengthen international efforts and synergy, accelerate the work in vital areas for the liberation of Crimea, and as a result, Crimea will be freed from occupation."

"So far, 40 foreign delegations have confirmed their participation and we hope that this number will increase until the summit. It is important that there is participation not only from the Euro-Atlantic region but also from other regions," she added.

Noting that they expect a high level of participation from Turkey, Dzhaparova said: "Turkey is one of the most active supporters of the Crimea issue in the international arena and we hope that the Crimean Platform will participate in other working groups and projects."

Describing the Crimean Platform as a “political weapon of Ukraine” to defend its territorial integrity and to restore its borders, Kuleba added: “I do not think there are closer friends in Crimea than Ukraine and Turkey, we are two nations who care for this piece of land, for the people living there historically, for Crimean Tatars. This makes it more than natural for Kyiv and Ankara to cooperate closely on this matter.”