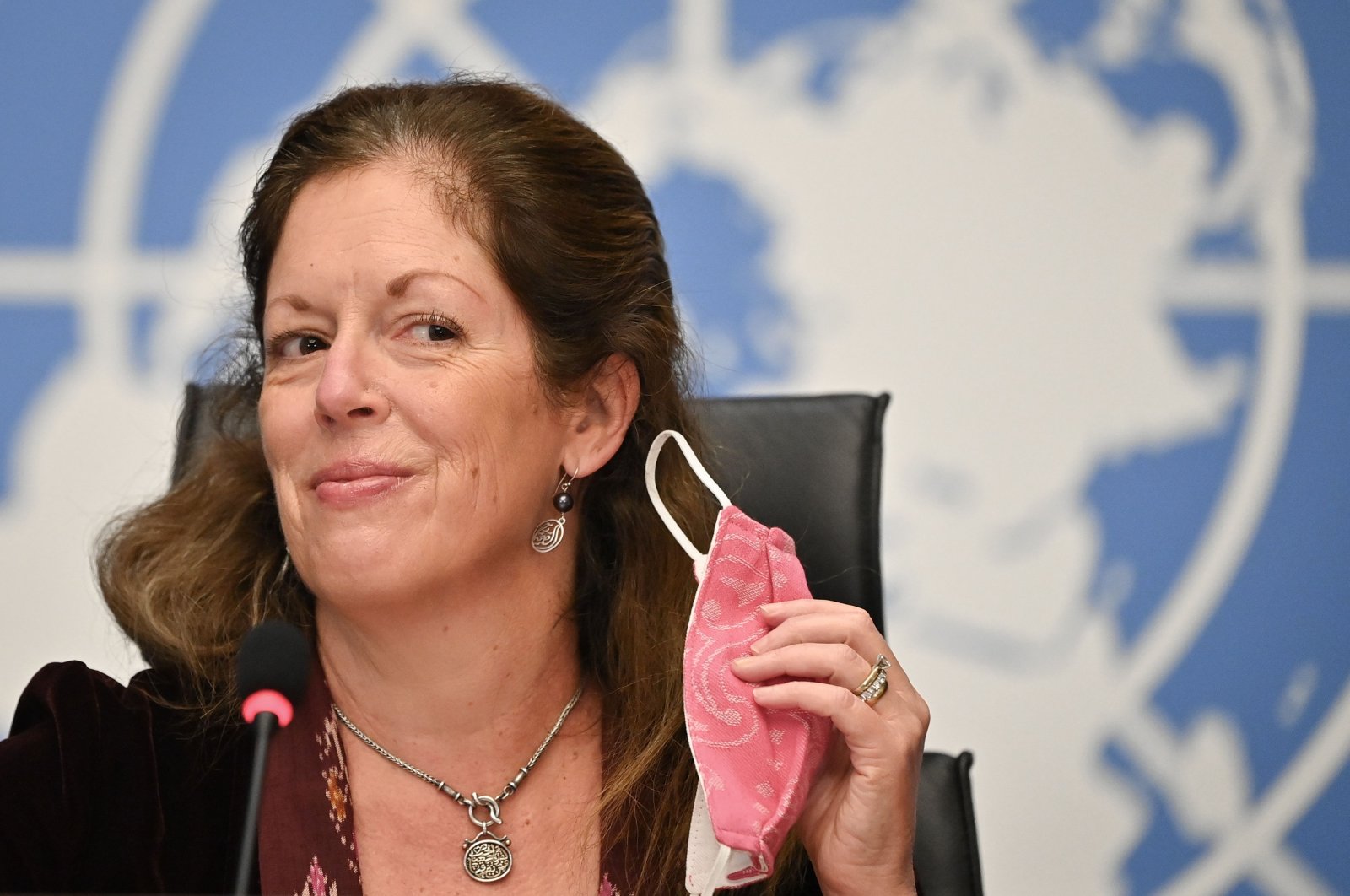 Stephanie Williams, the deputy special representative of the U.N. secretary-general for political affairs in Libya, removes her face mask during a press conference on talks between the rival factions in the Libya conflict, Geneva, Oct. 21, 2020. (AFP)
by DAILY SABAH WITH AGENCIES Oct 22, 2020 11:12 am
RECOMMENDED

Libya's rival factions have agreed to maintain a lull in fighting and open internal land and air routes, the U.N.'s envoy to the troubled North African country said Wednesday, expressing optimism about prospects for a cease-fire.

The two sides meeting in Geneva had agreed to "support and continue the current calm on the frontlines and to avoid any military escalation," said Stephanie Williams, acting head of the U.N. Support Mission in Libya (UNSMIL).

"I'm quite optimistic ... there is an air of seriousness and commitment," she said on the prospect of a cease-fire.

But she stressed that "the degree of foreign intervention and foreign interference in Libya is unacceptable."

The North African country is dominated by armed groups, riven by local conflicts and divided between two bitterly opposed administrations: a U.N.-recognized Government of National Accord (GNA) based in Tripoli and eastern-based putschist Gen. Khalifa Haftar.

Williams said the U.N.'s aim was to protect the 130,000 population of Sirte, previously held by Daesh terrorists.

Most recently, Haftar forces last week launched four Grad missiles on Libyan Army units based west of Sirte province in a renewed violation of the cease-fire.

The Geneva talks are the latest effort to bring peace, and the fourth round of the so-called 5+5 Joint Military Commission (JMC) talks that began on Monday.

The JMC is one of the three intra-Libyan tracks that UNSMIL is working on, along with economic and political tracks.

A previous agreement between rival Libyan sides, signed in Morocco in 2015, created a unity government that was never recognized by Haftar.

In April 2019, he launched an offensive to seize Tripoli but was pushed back after over a year of fighting.

Since his forces were driven from western Libya, the rival sides have resumed talks on specific themes: institutions, military and political affairs.

Mohamed Eljarh, a Libya expert and co-founder of Libya Outlook for Research and Consulting, said the military talks were the most important track because they could be the basis for a full cease-fire deal.

"Without a military and security agreement, all the political negotiations and diplomatic efforts underway will come to nothing and will have no effective impact on the ground," he told Agence France-Presse (AFP).

After two days of face-to-face discussions, scheduled to last until Saturday, the two sides agreed to reopen domestic transport links and also on moves to revive oil production in the country now mired in deep economic crisis, Williams said.

She added that following last week's first flight in 18 months between Tripoli and the eastern city of Benghazi, regular flights between Libya's two main cities would resume "toward the end of this week."

Afriqiyah Airways said on Facebook that it planned to operate its first regular Tripoli-Benghazi passenger flight on Friday and was studying reopening air links with the country's south.

The two sides also agreed to open all the country's main highways including the key coastal road from Misrata to Sirte.

Williams said they would also work to boost oil output, delegating eastern and western commanders of the Petroleum Facilities Guards (PFG) to work with the National Oil Corporation (NOC) to restructure the PFG and ensure the continued flow of oil.

Libya's oil production, a vital source of income, has been repeatedly halted as various groups seized and blockaded key installations and export terminals.

The Guards, under the control of Libya's defense ministry before the revolution, have since morphed into armed groups with shifting allegiances.

Williams said the sides in Geneva had showed "real determination" to preserve Libya's unity and sovereignty despite "flagrant foreign intervention and blatant violations" of a U.N. arms embargo.

Williams said both sides had agreed that "when a cease-fire agreement is reached, all foreign forces and mercenaries must depart the country within 90 days, under U.N. supervision.

"For a start, there is a truce, there is no fighting in the Sirte-Jufra area or at least only skirmishes," he told the French Senate, also citing Haftar's move to end a nine-month blockade of the petrol terminals as "a positive development."

Meanwhile, Khalid al-Mishri, the chair of Libya's High Council of State, expressed on Wednesday that they are working on a frame that would end the transition period in the country.

During a joint press conference with Morocco’s Minister of Foreign Affairs Nasser Bourita in Rabat, al-Mishri said that with the assistance of Morocco, they are working on how to organize proper elections in the country and put an end to the transition period.

He also heralded that they have high hopes on reaching sustainable solutions as the sides agreed on institutions that would recover the economy of the conflicted country.