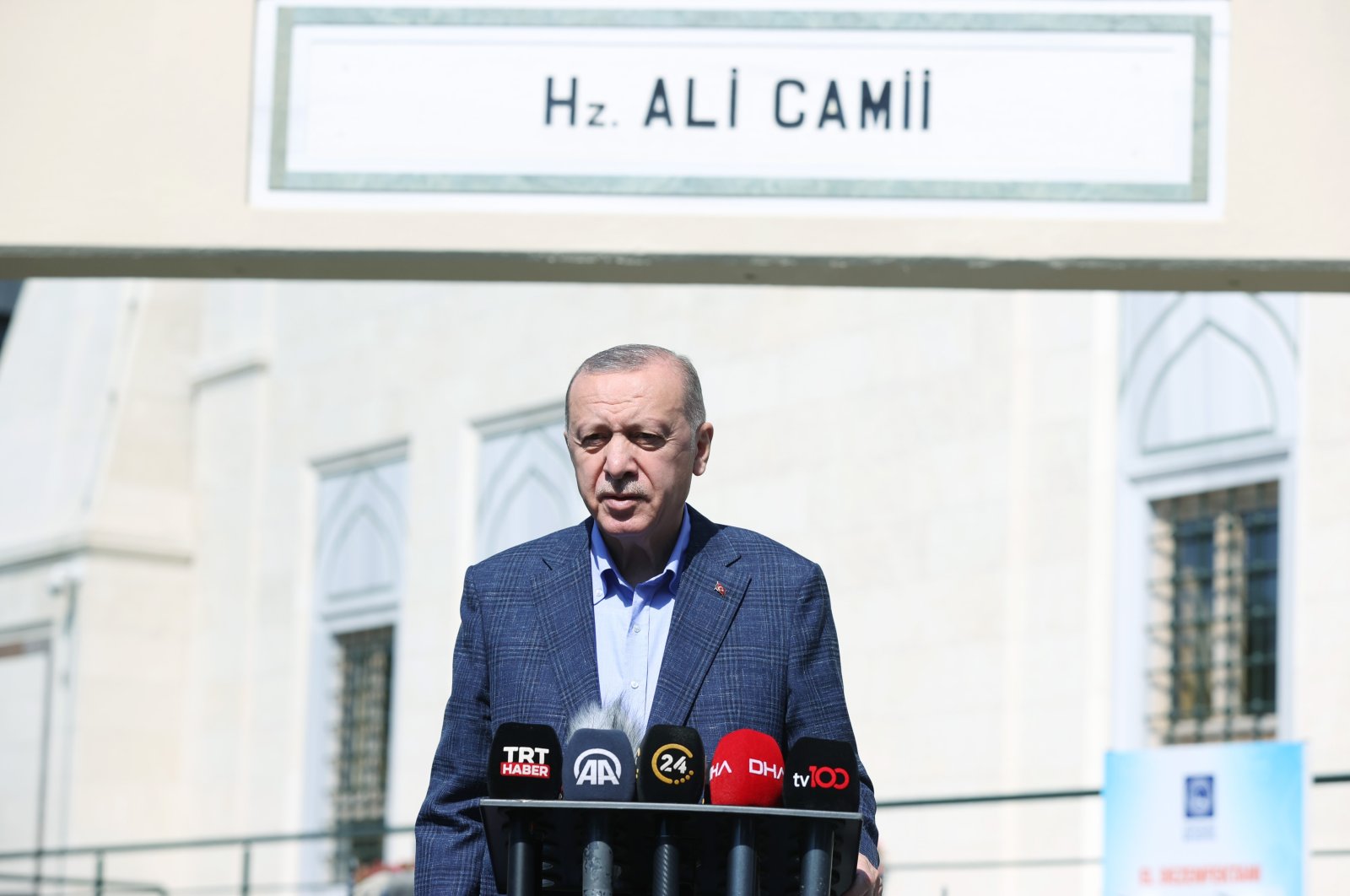 The United States is currently supporting terrorist organizations much more than expected, President Recep Tayyip Erdoğan said Friday adding that the two NATO allies should be in a very different position.

“We have not experienced such a situation with previous U.S. leaders. Let alone fighting terrorist organizations, the U.S. gives them loads of equipment,” Erdoğan said while answering reporters' questions following Friday prayers in Istanbul.

He added that as a NATO country, Turkey must share these things with the world.

Erdoğan said Thursday he felt that relations with his U.S. counterpart Joe Biden had "not gotten off to a good start" since the latter's arrival in the White House.

The president said he had "worked well" with his previous U.S. counterparts, George W. Bush, Barack Obama and Donald Trump.

The U.S. primarily partnered with the Syrian offshoot of the PKK terrorist organization, the YPG, in northeastern Syria to fight the Daesh terrorist group. Turkey strongly opposed the terrorist group’s presence in northern Syria and the formation of a terror corridor, which has been a major sticking point in strained Turkey-U.S. relations. Under the pretext of fighting Daesh, the U.S. has provided military training and given truckloads of military support to the YPG, despite its NATO ally's security concerns.

The current course of U.S.-Turkey relations “does not bode well,” Erdoğan also said before departing the United Nations General Assembly in New York on Thursday.

In a wide-ranging briefing to Turkish journalists, Erdoğan highlighted divisions between the NATO allies over Turkey’s purchase of a Russian missile defense system and its consequent removal from the U.S.-led F-35 stealth fighter aircraft program.

“I cannot honestly say that there is a healthy process in Turkish-American relations,” the president was reported as saying in the Turkish media. “Look, we bought the F-35s, paid $1.4 billion, and these F-35s were not delivered to us.”

Ties between the NATO allies Turkey and the U.S. were badly strained in 2019 over Ankara’s acquisition of the advanced S-400 Russian air defense system, prompting Washington to remove Turkey from its F-35 Lightning II jet program. The U.S. argued that the system could be used by Russia to covertly obtain classified details on the Lockheed Martin F-35 jets and that it is incompatible with NATO systems. Turkey, however, insists that the S-400 would not be integrated into NATO systems and would not pose a threat to the alliance. The U.S. also sanctioned some Turkish officials and institutions over the purchase.

Previous talks between Turkey and the U.S. on the purchase of Patriots collapsed over a host of issues, from the S-400s to Ankara's dissatisfaction with Washington's terms. Turkey has said it will only agree to an offer if it includes technology transfer and joint production terms. Ankara has repeatedly stressed it was the U.S.' refusal to sell its Patriot missile systems that led it to seek other sellers, adding that Russia had offered a better deal, including technology transfers. Turkey even proposed setting up a commission with the U.S. to clarify any technical issues. Ankara and Washington have conducted several negotiations to solve the dispute, particularly with the new administration under U.S. President Biden; however, there have yet to be any results regarding the lifting of the sanctions.

Erdoğan also touched on his upcoming visit to Russia’s Sochi, where he will discuss bilateral relations and the situation in Syria with President Vladimir Putin.

“I expect from Mr. Putin, actually from Russia, different approaches as a necessity of our solidarity,” he said, underlining that the Bashar Assad regime poses a threat to Turkey’s south.

Erdoğan said Thursday that they would discuss bilateral relations and Syria, particularly the situation in Idlib, the final opposition stronghold in the country.

"At the same time, we will discuss Turkey-Russia bilateral relations and the situation in Syria. We will talk to them about our stance on Syria and the role we will play in the next process. Since we will hold the meeting without third parties, we will, of course, reach an important decision regarding Turkey-Russia relations," he said.

Turkey has backed opposition groups who sought to topple the Assad regime, while Russia has helped shore up Assad after a decade of conflict.

Both sides have complained about violations of a truce agreed on 18 months ago in the northwestern Idlib region, the last opposition bastion left in Syria, where Ankara says two Turkish troops were killed in an attack on Saturday.