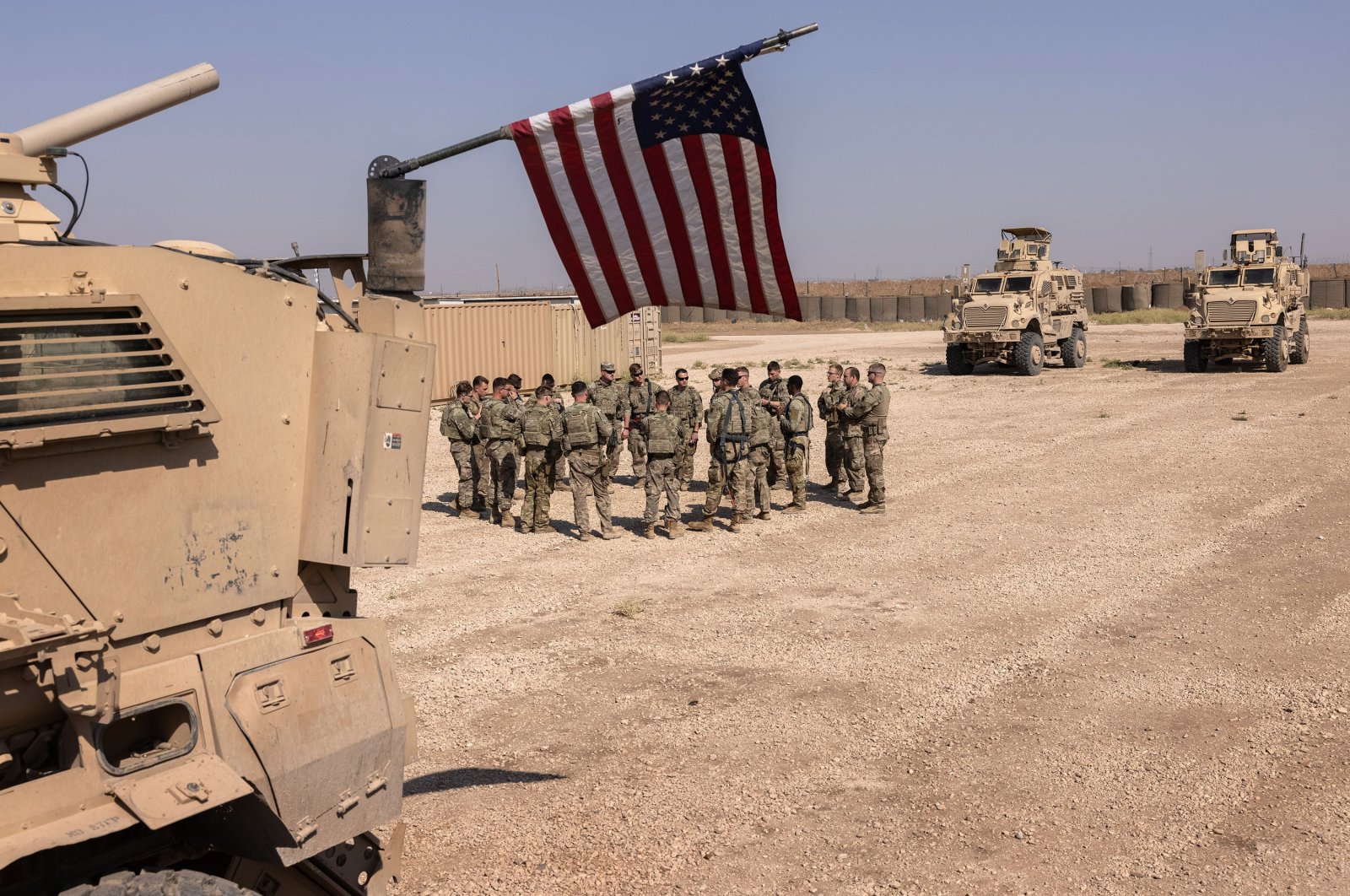 U.S. soldiers prepare to go out on patrol in coordination with YPG terrorists from a remote combat outpost in northeastern Syria, May 25, 2021. (Getty Images)
by DAILY SABAH WITH AGENCIES
Oct 10, 2021 12:12 pm

Turkish Foreign Minister Mevlüt Çavuşoğlu hit back at the U.S. after it extended the national emergency executive order in Syria, blasting the Americans for continuing cooperation with a terrorist organization

Criticizing the U.S. administration for not telling the truth in letters sent to Congress and failing to correctly inform its people, Çavuşoğlu said during a joint news conference with his visiting Venezuelan counterpart Felix Plasencia, "Instead of blaming Turkey, the U.S. should abandon its own wrong policies, and should be more honest with the American people and its Congress."

The U.S. Thursday extended the state of emergency decree issued in 2019 for another year, claiming that Turkey's activities in Syria pose a threat to national security.

It claimed that “the situation in and in relation to Syria, and in particular the actions by the government of Turkey to conduct a military offensive into northeast Syria” continue to pose an “unusual and extraordinary threat to the national security and foreign policy of the U.S.”

Earlier on the same day, before the publishing of the extension of the decree, Ilham Ahmed, one of the ringleaders of the YPG terrorist group, stated that the U.S. would continue to play a role in Syria to allegedly fight Daesh and develop infrastructure.

After meetings in Washington with representatives of the White House, the State Department and the Pentagon, Ahmed told Reuters that the U.S. "promised to do whatever it takes" to defeat Daesh in Syria's northeast and to "build infrastructure."

"They said they are going to stay in Syria and will not withdraw – they will keep fighting," Ahmed said. "Before they were unclear under (former President Donald) Trump and during the Afghan withdrawal, but this time they made everything clear," he claimed.

In 2019, then President Donald Trump withdrew most of the U.S. troops from Syria before Turkey's counterterrorism Operation Peace Spring.

The operation, conducted in line with the country's right to self-defense borne out of international law and United Nations Security Council resolutions, aimed to establish a terrorist-free safe zone for the Syrians' return in the area east of the Euphrates River, which was then controlled by the U.S.-backed YPG terrorists.

Turkey and the U.S. held talks on the operation on Oct. 17, 2019, in the Turkish capital, where it was agreed that Ankara would pause the operation for 120 hours in order for YPG terrorists to withdraw from the region. During this time, a large number of the terrorists were transported to Hassakeh province. The terrorists, however, continue to attack the safe zone as well as civilians living in the war-torn country’s northeast.

Local people living in areas held by the YPG have long suffered from its atrocities, as the terrorist organization has a notorious record of human rights abuses, including kidnappings, recruitment of child soldiers, torture, ethnic cleansing and forced displacement in Syria. The YPG has forced young people from areas under its control to join its forces within its "compulsory conscription."

Çavuşoğlu, who described the letter as a "copy-paste," said the U.S. administration had previously used the same wording.

"The reason for this is the U.S.' cooperation with the YPG terrorist organization, which the U.S. takes very seriously," he asserted.

"We know very well that the purpose of being here is not to fight against Daesh," he stated, emphasizing that this position is illegal under U.S. law. "We have fought against Daesh. The only army that is fighting against it is our army in NATO and the world," he outlined.

Around 4,000 terrorists have been killed as a result of this struggle, he said, adding that Turkey is supporting international efforts by taking measures against foreign terrorists.

He went on to say that the U.S.' Syria and Iraq policies, in fact, all of its policies, are being discussed in Europe and NATO. These policies are implemented without planning and foresight, he added.

Nationalist Movement Party (MHP) Chairperson Devlet Bahçeli also touched on relations with the U.S. during a congress of his party, calling on the Biden administration to make a decision.

Ankara and Washington disagree on a number of issues that have further strained bilateral ties in recent years, from Turkey’s purchase of Russian S-400 missile defense systems to the U.S.' support for the YPG terrorist group, as well as the U.S. refusal to extradite Fetullah Gülen, leader of the Gülenist Terror Group (FETÖ) and some other legal matters. The two NATO allies also have differing views on some regional issues, such as the Nagorno-Karabakh conflict as well as Ankara's hydrocarbon exploration activities in the Eastern Mediterranean.