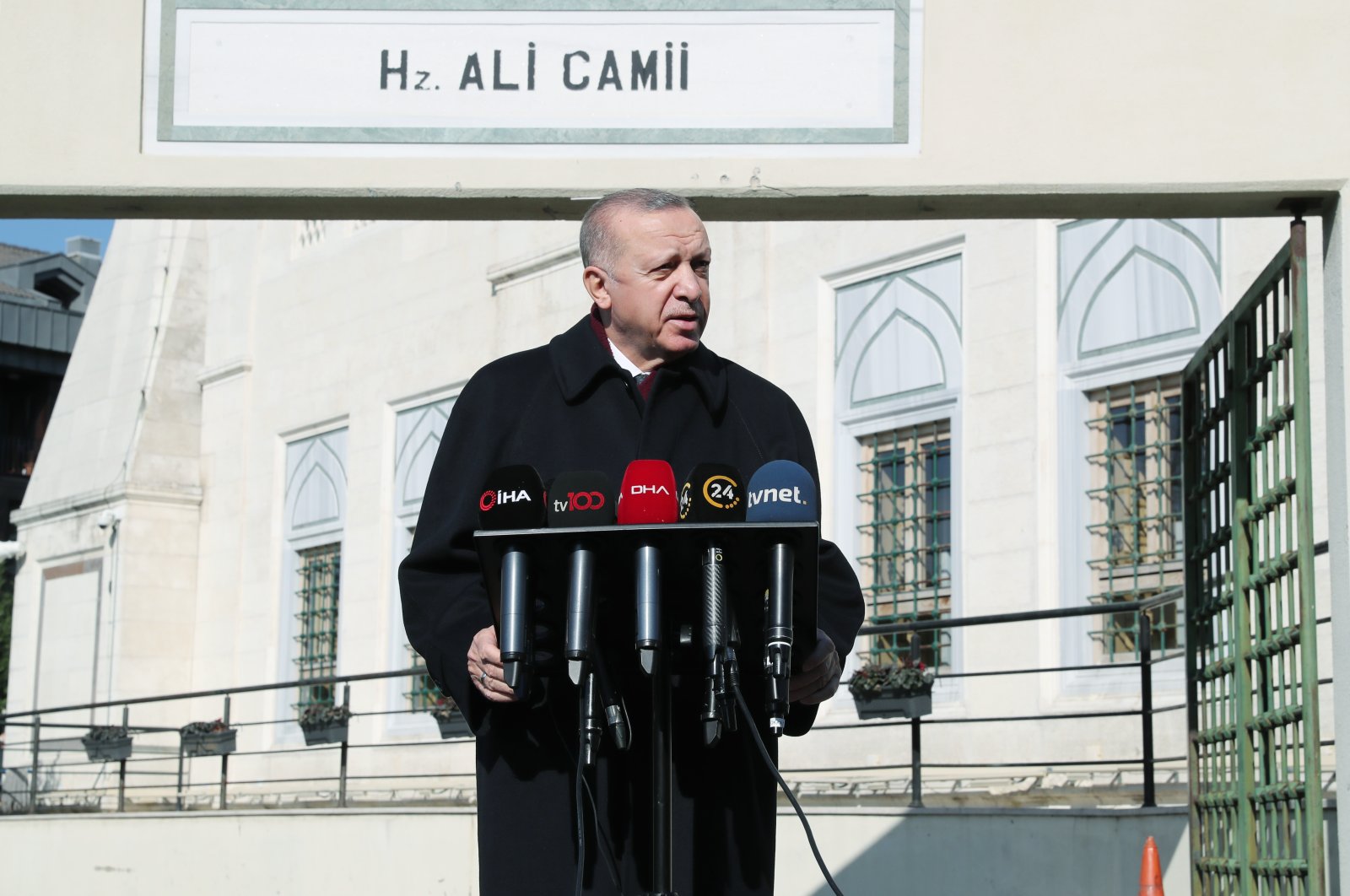 President Recep Tayyip Erdoğan chided the United States and France for their recent criticism of Turkey's stance on the protests at the prestigious Boğaziçi University in Istanbul, calling on the two to stop attempting to infiltrate into Turkey's domestic affairs.

Speaking to reporters following Friday prayers at the Hazreti Ali Mosque in Istanbul's Üsküdar district, Erdoğan said the incident at Boğaziçi should not be considered as mass student protests.

"There are no issues in the other 206 universities throughout the country, both in terms of education and infrastructure, but only Boğaziçi University turned into an issue," he said.

"They will not be able to transform the matter into something like the Gezi incidents," Erdoğan said, as he reiterated that some political actors like the pro-PKK Peoples' Democratic Party (HDP) have been exploiting the issue.

"No one has the right to terrorize our science centers, and we will not allow it," Erdoğan also said.

The president noted that the U.S. and France are in no place to interfere in Turkey’s internal affairs.

"They should look in the mirror before criticizing Turkey," he said, as he criticized French President Emmanuel Macron for his poor handling of the Yellow Vest protests, and the U.S. for its use of disproportional violence against peaceful protesters during the Black Lives Matter protests.

The Foreign Ministry on Thursday also criticized the U.S.' recent statement about the protests over the appointment of a new rector at Boğaziçi University, saying that it is nobody’s place to interfere in the internal affairs of Turkey.

Boğaziçi University, one of the most prestigious higher education institutions in Turkey, became the center of violent protests last month after the appointment of Melih Bulu as the rector. Just as the protests began to relatively die down, another incident occurred, sparking further outcry and leading protesters to convene once more at the campus. Over the weekend, four people were detained when they unfurled a picture depicting the Kaaba, Islam’s holiest site, with an LGBTQ+ flag.

Police have detained dozens of people in recent days as violent riots broke out in the city’s Kadıköy district on the Asian side Tuesday evening. Demonstrators clashed with police trying to disperse their unauthorized rally, and hundreds were detained for charges including resisting police, holding an unauthorized gathering and assault on a police vehicle.

Authorities say the majority of protesters are not affiliated with the university while Erdoğan underlined after last month’s protests that some terrorist groups exploited the protest to stage riots. Erdoğan earlier this week commented on the recent riots where the majority of the detained suspects were aligned with far-left terrorist groups. At an event of the ruling Justice and Development Party (AK Party), the president had lamented the main opposition Republican People’s Party (CHP) leader Kemal Kılıçdaroğlu’s support of protesters.

“He describes terrorists there as children of this country and his friends. I wonder if they are really students or whether they are terrorists trying to occupy the rector’s offices. We will never allow the domination of terrorists. We won’t see another Gezi incident,” the president said, referring to the 2013 riots at Istanbul’s Gezi Park. The Gezi Park incidents had escalated from a simple protest of a planned redevelopment of a park at the heart of the city into a massive riot hijacked by far-left groups that clashed with police.

Though the president is authorized to appoint rectors to the country’s universities, Bulu faced an unprecedented reaction at Boğaziçi, which has been home to anti-government protests in the past. The rule regarding the rectors’ appointment by the president came into force in 2016, and since then, calls had been mounting for the reintroduction of the former practice of rector elections. Currently, the Council of Higher Education (YÖK) supervises the selection of three candidates for the rector’s post and presents them to the president for the approval of one of the three.

The president has appointed dozens of rectors to universities all across the country since he took office in 2014. Since the president was given the authority to appoint rectors in 2016, few have faced such staunch opposition as in Boğaziçi. Bulu’s predecessor Mehmed Özkan, who was appointed in 2017 by Erdoğan, had also faced protests branding him a “trustee,” a term used to describe state-appointed heads of municipalities or companies whose directors or owners are under investigation for wrongdoings.

The opposition to Bulu's appointment mainly lies on the argument that he was not a member of Boğaziçi's academic staff and only completed his postgraduate studies there, in addition to calls for the reintroduction of rector elections as was the practice prior to 2016. The former system also led to constant debate over YÖK's supervision of candidates and results, along with the president's authority to appoint one of the top three candidates.

Boğaziçi University, founded in the 19th century as Robert College, was the first American university outside the U.S. It is one of the highest-ranking institutions in the country in terms of scientific research and academic success. Until 1971, its rectors had been American academics.

In response to Macron's recent calls for Turkey to withdraw troops from Libya, Erdoğan said the French president still has not learned his lesson.

"There are mercenaries who came from Chad, or Mali, where France has invaded. Macron needs to look at these first," Erdoğan said.

Libya's internationally recognized Government of National Accord (GNA) made a formal request for "air, ground and sea" support from the Turkish military to help fend off an offensive by forces loyal to putschist Gen. Khalifa Haftar, who was attempting to take control of the capital, Tripoli. Turkey supports the GNA, which is also backed by the United Nations, against Hafter's militia and mercenaries, which are supported by France, Russia, Jordan, the United Arab Emirates (UAE) and other key Arab countries.

Turkey has frequently voiced that French support has encouraged Haftar to insist on military means and further added to the pain and grievances of war-weary Libyans.