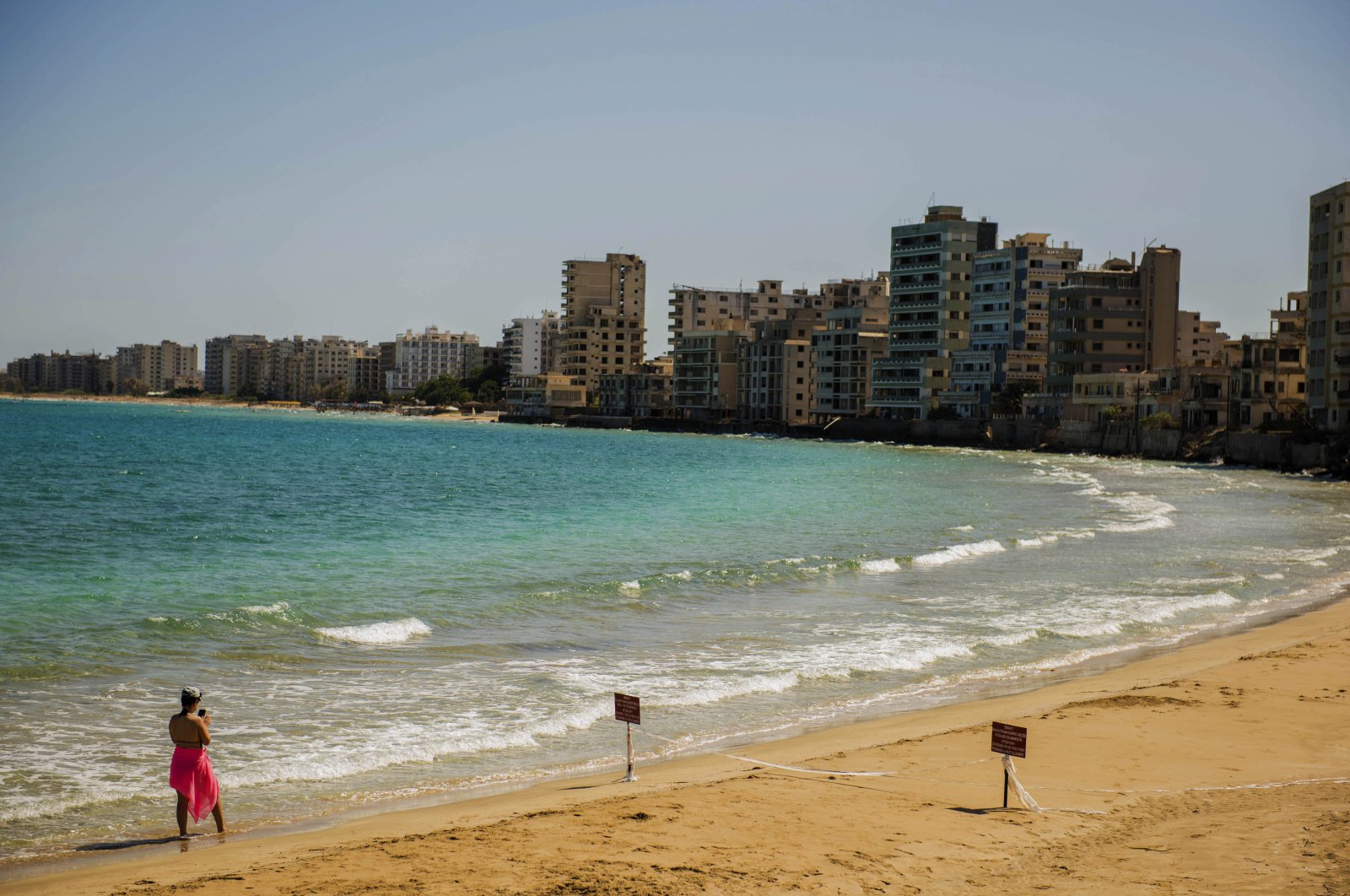 A woman checks her mobile phone as she strolls along an empty stretch of beach in the recently opened ghost suburb of Varosha, Turkish Republic of Northern Cyprus, Sept. 4, 2021. (AP Photo)
by DAILY SABAH WITH AA
Oct 08, 2021 11:50 am

The process of reopening Varosha (Maraş), which was a ghost town for 46 years, has benefited the Turkish Republic of Northern Cyprus (TRNC) both politically and in terms of tourism and the economy, Turkish Cypriot President Ersin Tatar said Friday, adding that it will continue to do so.

Speaking with Anadolu Agency (AA) on the first anniversary of the start of the gradual opening of Varosha after 46 years, Tatar ruled out the town remaining closed for another 46 years.

Touching on the properties in the region, he said: "Applicants to the Immovable Property Commission will be able to regain their properties. It is their choice for the Greeks to settle here again and bring them into the economy. They can come or sell if they wish."

Tatar explained that the process was a step taken with Turkey's support, and added: "The Varosha initiative emerged with a change in policy. That change in policy is that instead of a solution on a federal basis, which has not yielded any results for 50 years, there should be a struggle for a two-state solution in Cyprus from now on."

Varosha was a famous resort area on the island that boasted a capacity of 10,000 beds across more than 100 hotels. Turkish military forces intervened on the island following a Greece-backed coup, which stopped the yearslong persecution and violence against Turkish Cypriots by ultra-nationalist Greek Cypriots.

The city of Varosha is protected by a 1984 U.N. Security Council (UNSC) resolution, stating that the empty town can only be resettled in by its original inhabitants. If the Greek Cypriots had accepted the 2004 U.N. Cyprus reunification plan, known as the Annan plan, Varosha would now be back under Greek Cypriot control and its residents back in their homes. Despite this, the majority of Greek Cypriots voted against the plan, while Turkish Cypriots voted for it.

After partially opening on Oct. 8, 2020, after remaining a "ghost town" for decades in the wake of Turkey's 1974 peace operation on the island in response to a coup aimed at Cyprus's annexation by Greece, Varosha has attracted both people living in the TRNC as well as foreign tourists, with the environment and landscape around the town also boosting its appeal. Located in Northern Cyprus, entry into the town was forbidden except for Turkish army personnel stationed in the TRNC.

Cyprus has been mired for decades in a dispute between Greek and Turkish Cypriots, despite a series of diplomatic efforts by the U.N to achieve a comprehensive settlement. Ethnic attacks starting in the early 1960s forced Turkish Cypriots to withdraw into enclaves for their safety. In 1974, a Greek Cypriot coup aimed at Greece's annexation led to Turkey's military intervention as a guarantor power to protect Turkish Cypriots from persecution and violence. As a result, the TRNC was founded in 1983. It has seen an on-and-off peace process in recent years, including a failed 2017 initiative in Switzerland under the auspices of guarantor countries Turkey, Greece and the U.K.