Western ambassadors took a step back, will be more careful: Erdoğan 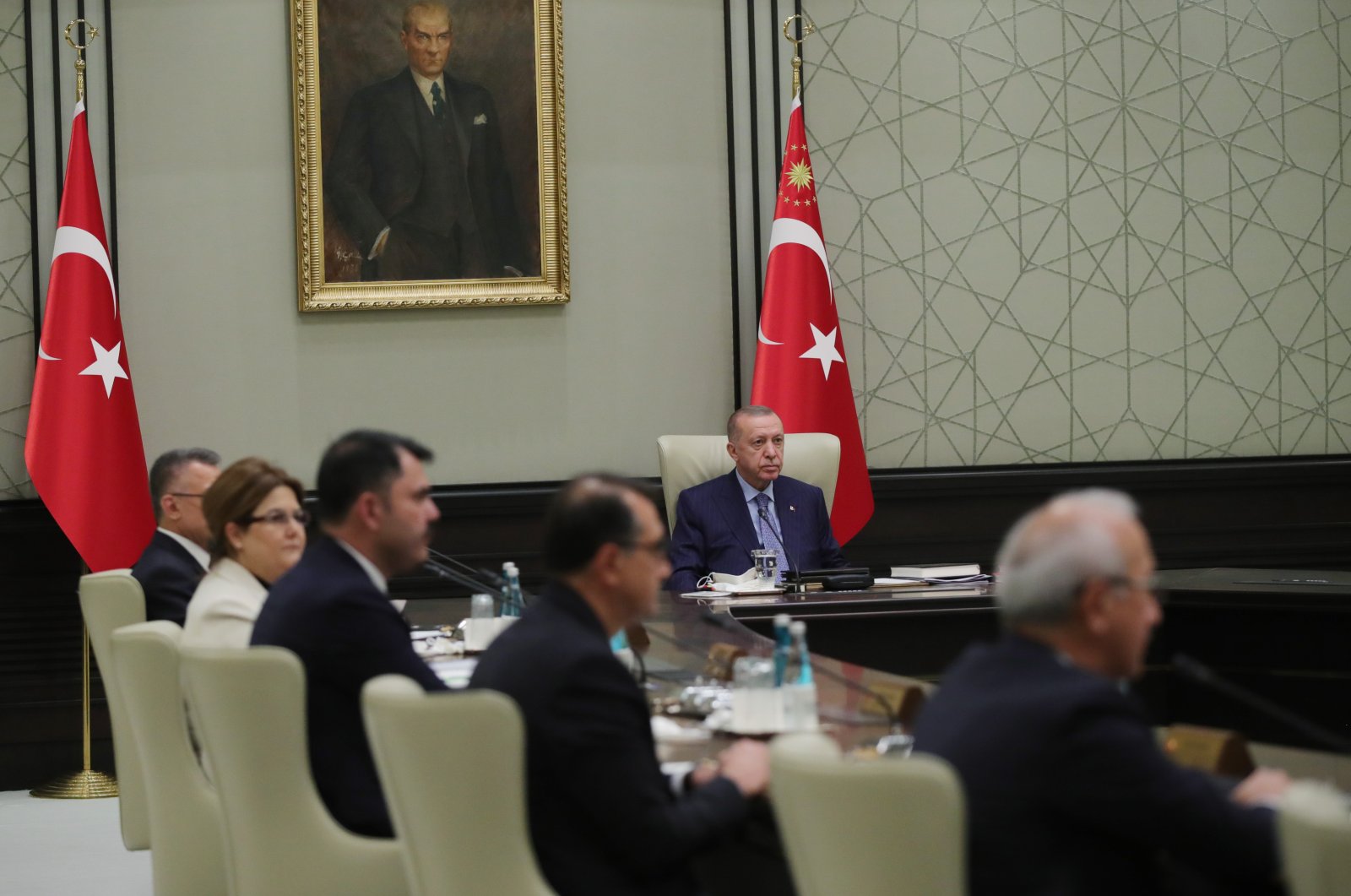 President Recep Tayyip Erdoğan and ministers are seen in this photo taken before the Cabinet meeting at the Presidential Complex, Ankara, Turkey, Oct. 25, 2021. (AA Photo)
by Daily Sabah with Agencies Oct 25, 2021 7:26 pm
RECOMMENDED

President Recep Tayyip Erdoğan on Monday said ambassadors from the Western countries who he called to be expelled over their statement on the ongoing case of a jailed businessperson had taken a step back and would be more careful in their statements.

Erdoğan’s remarks came after a Cabinet meeting, during which the United States and other embassies had issued an almost simultaneous statement on Twitter, saying they would abide by a diplomatic convention not to interfere in a host country’s affairs.

Erdoğan said over the weekend that he had ordered the envoys from 10 countries, including the U.S., Germany and France, be declared “persona non grata” for calling for the release of Osman Kavala, a Turkish businessperson imprisoned over his alleged role in the 2013 Gezi Park protests and subsequent riots, and the 2016 coup bid.

The president was said to have “received positively” the statements by the embassies of the U.S., Canada, Finland, Sweden, Denmark, Norway, New Zealand, the Netherlands, Germany and France that they abide by Article 41 of the Vienna Convention on Diplomatic Relations, which outlines diplomats’ duties to respect the laws of the host state and not to interfere in internal affairs.

“We believe that these ambassadors, who have fulfilled their commitment to Article 41 of the Vienna Convention, will now be more careful in their statements,” Erdoğan said in televised remarks following a three-hour Cabinet meeting in the capital Ankara, saying the envoys had learned their lesson.

The new statement “shows they have taken a step back from the slander against our country,” Erdoğan said.

“Those who have shaped our country as they wished in the past panicked when Turkey made its own stand,” he asserted.

He portrayed the “outrageous” initial statement as a direct attack on Turkey’s judiciary and sovereignty. “Our intention is never to create a crisis, but to protect the dignity of our country,” the president said.

“Anyone who doesn’t respect the independence of our country and the sensitivities of our nation, no matter what his title is, cannot be accommodated in this country.”

“Turkey’s judiciary does not take orders from anyone,” Erdoğan stressed. “It was my duty as the head of state to give the necessary response to this disrespect towards our judicial members.”

"Those who turn to their old habits, seeing Turkey’s kindness as weakness, will be responded to accordingly, as long as they do not admit their wrongdoing," the president noted.

Erdoğan’s remarks were followed by a statement from his top aide, who said Ankara would not refrain from taking further action against the Western embassies.

“Our Foreign Ministry has already given the necessary response to these foreign missions and warned them about their unacceptable behavior,” said Fahrettin Altun, Turkey’s communications director.

“Our government will not shy away from any further steps to show that we will never compromise our national sovereignty,” Altun said on Twitter.