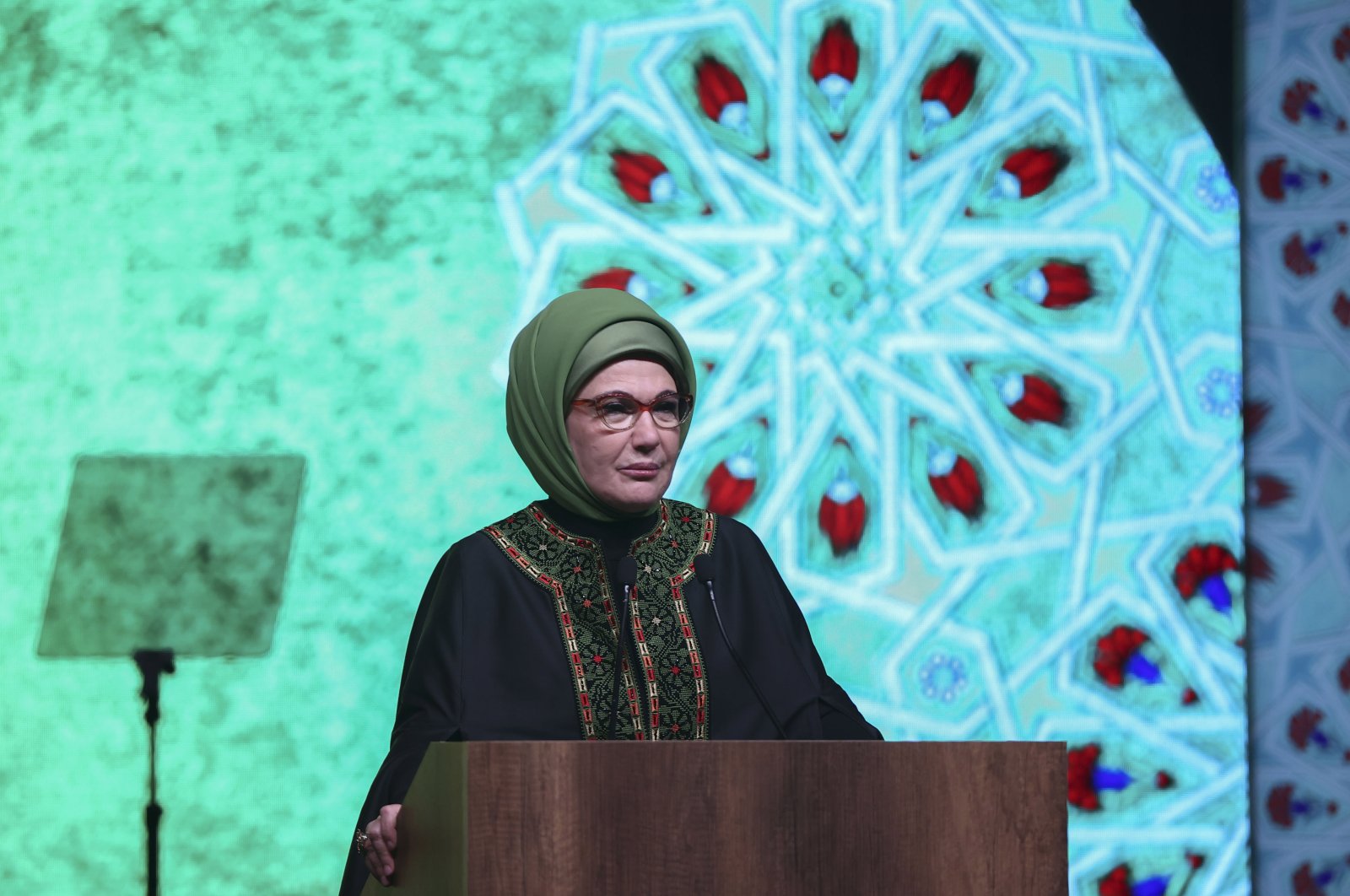 First lady Emine Erdoğan speaks during an event on the sidelines of the 3rd Turkey-Africa Partnership Summit in Istanbul, Turkey, Dec. 18, 2021. (AA Photo)
by Nur Özkan Erbay Dec 24, 2021 8:00 am
RECOMMENDED

As is true throughout the world, the key to propelling Africa's economic and social transformation and development is women’s empowerment, Turkey’s first lady Emine Erdoğan said.

“If women become stronger, then so will families and children,” Erdoğan said during an exclusive interview with Daily Sabah.

The first lady elaborated on her visit to Ethiopia to a textile and jewelry atelier linked to a nongovernmental organization (NGO) where she learned that the women’s handmade products were bought for a small value and sold in Europe’s expensive boutiques for far higher prices.

“I wanted to support these women by establishing a fair market. As a result of our work, we opened the Africa Handicraft Market and Culture House in Ankara’s historical Hamamönü district,” Erdoğan said, explaining that products from 18 countries are flown in and all the profits are sent back to the women.

She also reiterated that Turkey, with its human-focused foreign policy, is also supporting African countries in terms of education, which plays a significant role in the development of the continent. So far, more than 14,000 African students have benefitted from Turkey’s scholarships, according to Erdoğan.

'My Travels to Africa'

The first lady also spoke about her memoir "My Travels to Africa," which was published this year. The book, which is dedicated to her mother, covers the first lady's visits from 2014-2020 to 23 African countries, including Algeria, Ethiopia, Somalia, Tanzania, Mozambique and Senegal.

Erdoğan stated that she strives to raise awareness about Africa’s problems, especially through international conferences and meetings, and mentioned that she promoted her book documenting her time in Africa during the opening of the Turkish House (Türkevi) in New York on the sidelines of the United Nations General Assembly.

Furthermore, Erdoğan was invited by the first lady of Sierra Leone to participate in a panel titled “Preventing Early Marriage and Rape in Africa,” where she delivered a speech that underlined that child marriages are both a violation of human rights and a crime according to international law.

“The International Global Somalia Diaspora Conference is also a meeting that I attach great importance to. The third one was held in Istanbul in 2019 and I met with Somali youth and consulted on what could be done to transfer their knowledge and professional skills gained in Western countries to Somalia,” she said.

Erdoğan noted that she also met with representatives of the Global Somali Diaspora in 2019 to discuss the support Turkey gives to Somalia.

She also drew attention to the events held every year in Turkey on May 25 to mark Africa Day, describing it as an occasion that provides an opportunity to come together with our African friends.

The first lady stressed that wonderful cultural projects have been carried out, including the books on "African Food Culture" and "African Proverbs," which were realized through the camaraderie of a team featuring African ambassadors and academics.

The recipes in the African cookbook were selected by female ambassadors, who prepared the dishes in the Presidential Complex kitchen to be photographed.

“Again, proverbs were compiled by African ambassadors. I believe that these two books are an effort that strengthens our friendship, as well as an important contribution to the literature,” she highlighted.

Orphans entrusted to the whole world

Shifting to another note, Erdoğan highlighted that she tries to frequently visit orphanages on her trips to Africa.

“Unfortunately, there is a huge population of orphans in Africa. These orphans are entrusted to the whole world,” she said.

When asked about her experience in Djibouti, where two babies were named Emine and Tayyip, Erdoğan said: “The babies they named after us are in my heart like all other orphaned children. This bond of the heart, the empathy I have with them, is the starting point of many projects I try to do.”

Describing Turkey's ties with the continent as “historical,” she said that one stumbles upon the works of our Turkish ancestors throughout Africa. “These create a certain perception. In other words, the love for Turks goes back to ancient times,” she explained.

Erdoğan reiterated that Turkey supported Africa in times of hardship, including the crisis in Somalia in 2011 and currently, amid the COVID-19 pandemic.

“During the pandemic, as you know, African countries suffered from food security problems. Turkey supported Africa at that time too. Special aid programs are being implemented especially for the vulnerable segments of African societies. With every step we take, we prove the importance we give to Africa.”

Turkey has no colonial past

“But most importantly,” she stressed, “the people of Africa know that Turkey has no background of colonialism. While some countries today still do not apologize for the colonialism of Africa, Turkey is going there to lend a hand and to shake hands.”

“Friendship is not a mask that we wear, it is our character itself. I believe that this fact is very clearly read from the other side. In other words, when they look at us, they see those who are constructing and reviving,” the first lady continued.

The 3rd Turkey-Africa Partnership Summit was held last week to carry relations between Ankara and the continent forward as new projects and areas of cooperation are within sight. The event took place under the theme "Enhanced Partnership for Common Development and Prosperity” and was attended by over 100 government ministers and 16 presidents from Africa.

“During the busy schedule of the summit, it was highly important to touch upon the realities of Africa within the scope of the fight against climate change. Africa is one of the geographies that is most affected by climate change,” the first lady said.

The term "climate migrants" has entered our vocabulary this century, Erdoğan said, explaining: “People now do not migrate due to political or economic reasons, but also because geographies become uninhabitable.”

“Even though the whole globe is affected by climate change, the price Africa is paying, and will pay in the future is different,” she underlined and stressed that Africa is responsible for a small share of the world’s carbon dioxide emissions.

“People that become climate migrants, are not accepted by Western countries that are the main source of these emissions,” she said.

“This is a really painful situation. Humanity’s common problems require taking common responsibilities. Western countries must approach the issue of migration not through fear and refusal but through responsibility," she added.

She underlined that some countries may better adapt to climate change, putting developed countries at an advantage.

“As in all natural disasters, poor countries and fragile groups will be disproportionately affected by the negative effects of climate change,” she explained.

In a final declaration at the partnership summit, Turkey and African nations agreed to strengthen cooperation in several fields, including health "through further health sector investments."

These sub-themes will be implemented in five areas of strategic cooperation through a joint action plan from 2022 to 2026. The areas being: "Peace, Security and Governance," "Trade, Investment and Industry," "Education, Science-Technology-Innovation Skills, Youth and Women Development," "Infrastructure Development and Agriculture" and "Promoting Resilient Health Systems."

Under the government's outreach to Africa policy, Turkey's engagement with Africa has gained speed in recent years, spurred by President Recep Tayyip Erdoğan's groundbreaking visits to multiple countries on the continent.

Commenting on Turkey’s empathetic foreign policies in Africa, the first lady emphasized that Ankara launched its Africa initiative in 2005, which gained steam with the Africa Partnership Policy in 2013, with a win-win strategy in mind. She also drew attention to several Turkish institutions, including the Turkish Cooperation and Coordination Agency (TIKA), the Maarif Foundation, Yunus Emre Institute, the Turkish Red Crescent (Kızılay), Turkey's Disaster and Emergency Management Authority (AFAD) and the Diyanet Foundation, which are also contributing to the development of the continent.

Elaborating on Turkey’s policy in Africa, Erdoğan said: “The services we provide go far beyond grants or aid packages. By establishing infrastructure, we contribute to them becoming societies that stand on their own feet. These approaches distinguish us from other countries operating in Africa and reveal the multidimensional and humanitarian foreign policy of our country. The pages of history clearly show who the real architect of Africa's great suffering is. And our country adds a very different experience to this memory. In the future, when humanity reads the example of Turkey in history, it will believe in the goodness at the core of humanity and will also see that goodness, compassion and humanity can be the institutionalized character of a state.”

When asked about her hopes for a future Africa, the first lady said: “In such a picture, I would like to see an Africa that has the necessary infrastructure in every field, from education to health, rather than the past pains and their residues that are still felt today.”

“An Africa where human rights, women's rights and children's rights have not missed anyone, where basic needs are no longer a matter of life and death, is important not only for Africans, but for the whole world. Because being physically away from a place doesn't mean we're away from the pain that happens there. As justice, peace and the smile on people's faces increase on Earth, all of humanity takes advantage of this atmosphere. In other words, the construction of a better world that we have always wanted and dreamed of needs the joint efforts of the international community. In short, the Africa, which I paint in my mind, would be a place where words turn into reality with deeds, where humanity is holding each other's hands with the awareness that it is a family” she continued.

When one talks about Africa, the first thing that comes to mind is colonialism, the first lady stated, noting that the continent is associated with hunger, thirst, long famines and pandemics.

“When we say Africa, we are talking about a large continent consisting of dozens of countries. There are hundreds of ethnic groups and hundreds of languages spoken. Besides, there are many different beliefs. Therefore, the experience of each country is very different. When we evaluate in general, we see the traces of colonialism everywhere. But for a long time, Africa has been healing. Africa has unique development potential, both financially and spiritually. I believe that we will see a very different Africa in the future. I have even repeatedly said that Africa will become the shining star of the 21st century. But no matter what happens, what the African continent has experienced in the past will remain painful for human history.”

Commenting on how her visits to Africa differ from her other trips, Erdoğan said the continent is a place where the pain is concentrated.

“The extents injustice can reach are revealed here openly. The most distinctive feature of these travels is that they give people such a perspective.”