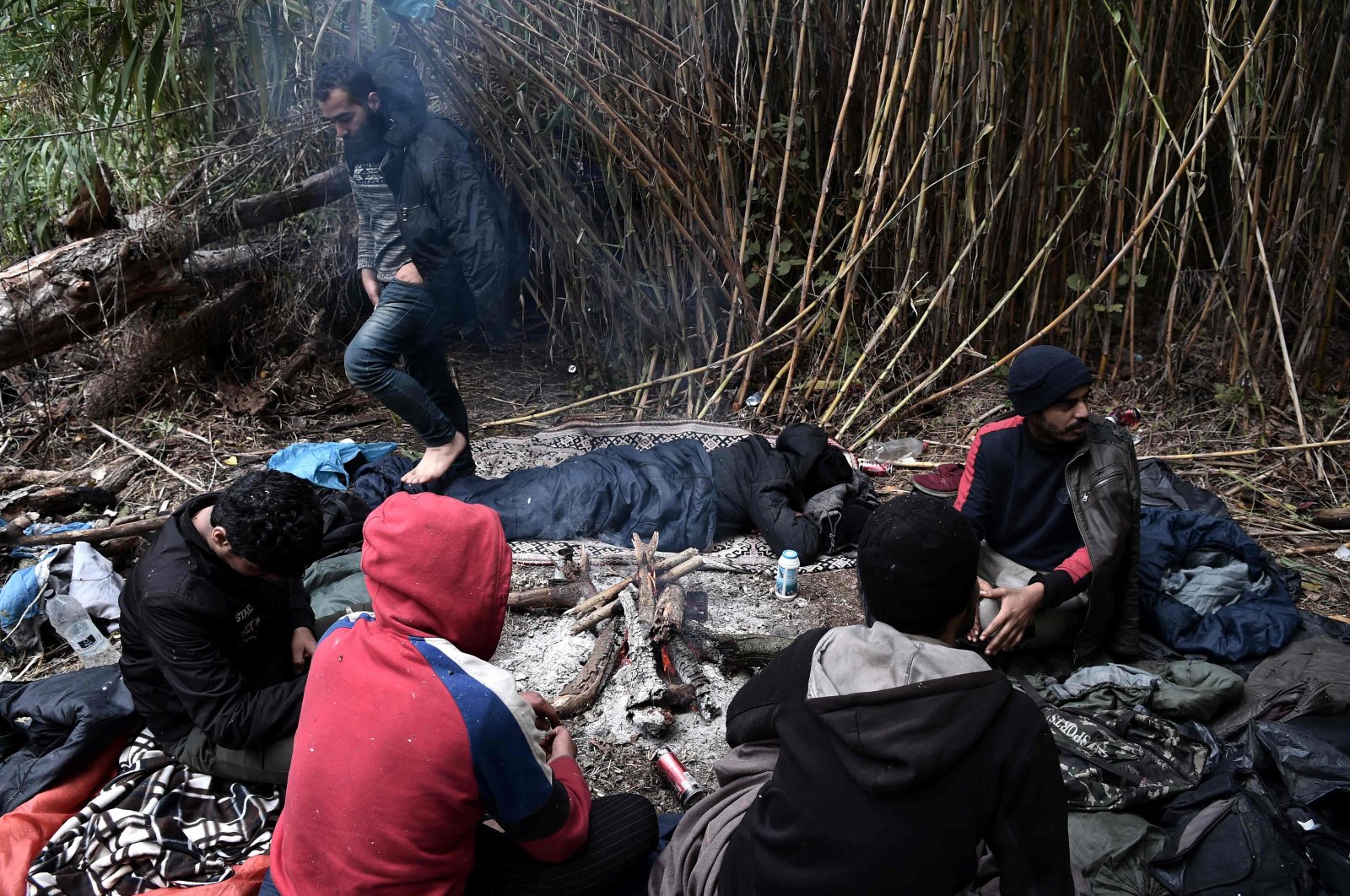 Migrants try to warm themselves by a fire near Idomeni at the border between Greece and North Macedonia on October 18, 2021. (AFP Photo)
by Daily Sabah with AFP Nov 17, 2021 10:06 am
RECOMMENDED

Greece's policy against migrants has taken a cruel turn, with the country criminalizing rescue operations with severe punishment. Two dozen humanitarian activists who helped migrants reach the country three years ago face a slew of charges, including espionage and criminal membership, in a keenly watched trial opening Thursday on the island of Lesbos.

But the pair – who were conditionally released in December 2018 and immediately left Greece – are also in line for a related felony investigation that will be tried separately.

Overall, 24 activists are on trial for their alleged affiliation with Emergency Response Centre International (ERCI), a nonprofit search-and-rescue group that operated on Lesbos and in Greek waters from 2016 to 2018.

Mardini, who now lives in Berlin, has a seven-year ban on returning to Greece and will not attend Thursday's trial. Binder has stated he will be present.

Mardini told HRW she was "scared" to volunteer again.

"At least we're out of detention now but we want this to be over. You get so exhausted. This has been a dark three years," she said.

Mardini had herself traveled by boat from Turkey to Greece in 2015 as an asylum-seeker from Syria.

When the engine failed, she and her younger sister Yusra, who swam for the refugee team at the 2016 and 2020 Summer Olympics and is now a U.N. goodwill ambassador, helped save others on board by swimming and keeping the boat afloat until it reached Lesbos.

Mardini later enrolled at Bard College Berlin and took leave from her studies for a semester to return to Lesbos as a volunteer with ERCI.

She was arrested in August 2018 just as she was about to fly back home.

Binder was arrested the same day.

The prosecution and investigation have been described in a European Parliament report as "currently the largest case of criminalization of solidarity in Europe."

The case "seems designed to deter future rescue efforts, which will only put lives at risk," Bill Van Esveld, associate children's rights director at HRW, said in a statement.

The prosecution has likened ERCI's search-and-rescue operations to a smuggling crime ring, while its fundraising activities are being investigated as potential money laundering.

Mardini and Binder, as well as other defendants, are charged with espionage based on the police report that their efforts to identify migrant boats in distress included monitoring the Greek coast guard and Frontex radio channels and vessels.

ERCI was registered as a nongovernmental organization (NGO) and regularly cooperated with the relevant Greek authorities on rescue missions.

The arrests forced the group to cease its operations, including maritime search and rescue, and providing medical care and non-formal education to migrants and asylum-seekers.

So far in 2021, 24 people have drowned in the Eastern Mediterranean trying to enter Europe, including four children and a woman who died on Oct. 26 in a shipwreck with two others missing, HRW said.

The Greek Ministry of Migration and Asylum reported a 76% decrease in the number of asylum-seekers residing on the country's Aegean islands compared to October 2020. A drop of 47% was recorded also in the number of asylum-seekers residing in other facilities across the country compared to last year, it said. According to the report, the island of Samos recorded the largest decrease by 92%, followed by Chios with 91%, Leros with 88%, Lesvos with 65% and Kos with 54%. Arrivals in the first 10 months of 2021 also dropped by 67% on the islands and by 46% in the rest of the mainland compared to the same period last year, the report noted.

Greece has been criticized several times for its illegal and brutal pushbacks of refugees from its borders and illegally detaining them before returning them to Turkey. Although evidence from such events has been documented, the Greek side denies them.

Last week, Prime Minister Kyriakos Mitsotakis angrily defended Greece's controversial migration policy in a heated debate with a reporter who accused him of "narcissistic abuse" during a press conference with his Dutch counterpart in Athens. The reporter echoed the call of many rights groups and organizations urging Athens to stop lying and admit to the systematic policy of "cruel and barbarian pushbacks."

In recent years, hundreds of thousands have made short but perilous journeys across the Aegean to reach northern and western Europe in search of a better life. Turkey and Greece have been key transit points for migrants fleeing war and persecution, looking to cross into Europe to start new lives. Hundreds of people have died at sea as many boats carrying refugees sank or capsized. The Turkish Coast Guard Command has rescued thousands of others.

Turkey has accused Greece of large-scale pushbacks and summary deportations without migrants being given access to asylum procedures, which is a violation of international law. It also accuses the EU of turning a blind eye to this blatant abuse of human rights. Various human rights organizations have also documented and criticized Greece's violent migrant policies.

In a report published in September, Europe's Fundamental Rights Agency (FRA) revealed that migrants continue to live in difficult conditions and have their rights violated while in detention and reception centers at EU borders. The report also noted that pushing migrants back to Turkey has become Greece's de facto border policy.