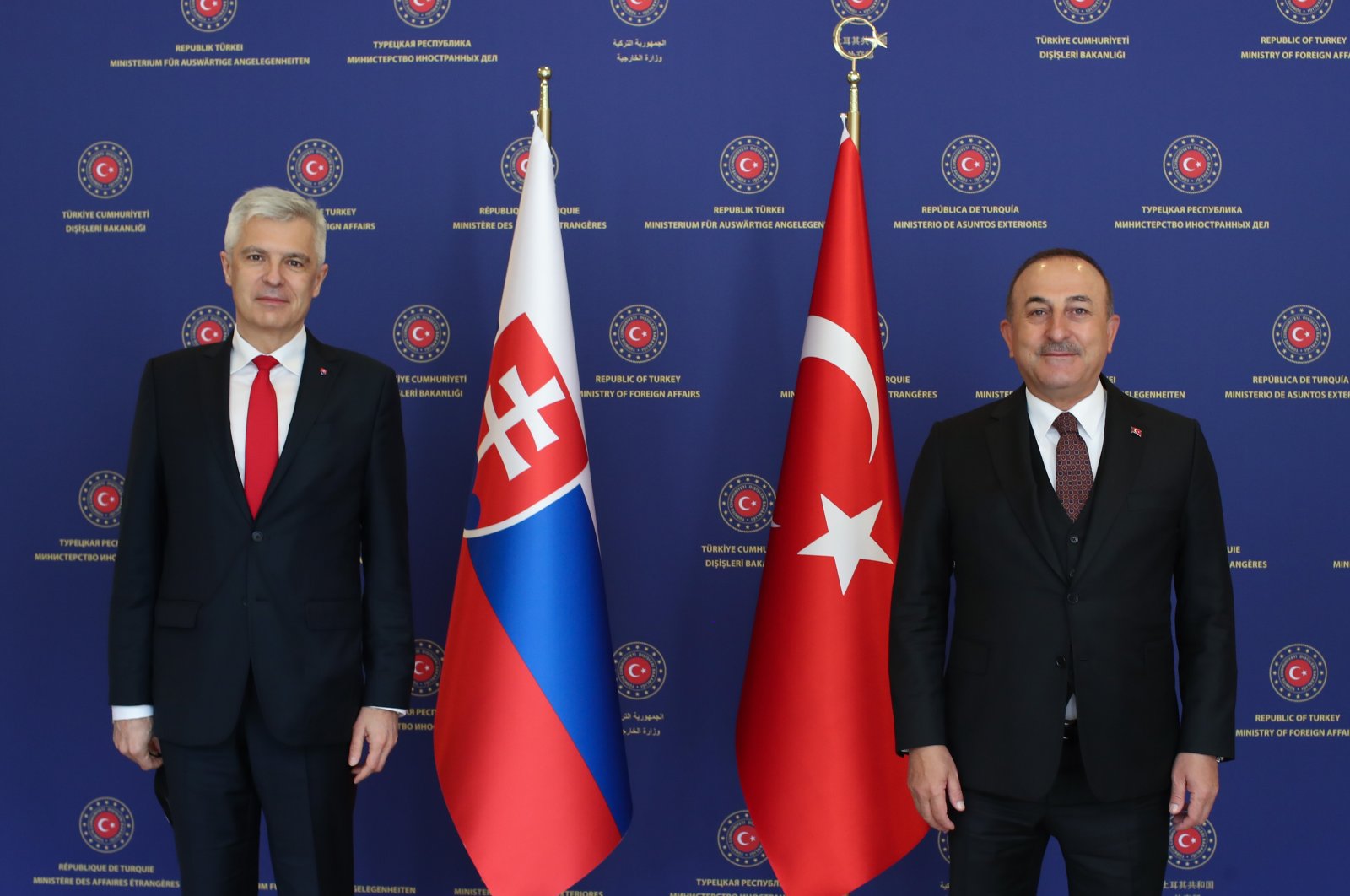 Improvements can be made in Turkey's talks over visa liberalization with the European Union, Foreign Minister Mevlüt Çavuşoğlu said Tuesday.

Speaking at a joint press conference with his Slovak counterpart Ivan Korcok, Çavuşoğlu mentioned Turkey's ties with the EU and urged the bloc to side with Ankara and improve relations.

Visa liberalization was designed so Turkish citizens with biometric passports would be able to enter the Schengen area within 180 days for three months without any visa. With this initiative, Turkey-EU ties, which were struggling due to the union's discriminative attitude by excusing some political obstacle claims, have entered a new era through the migration crisis.

The first Turkey-EU summit took place on Nov. 29, 2015, and a memorandum was released in the aftermath expressing that the membership negotiations will be revived, cooperation against terrorism will be strengthened, summits will be conducted regularly, close cooperation will be resumed through senior dialogue mechanisms at the political, economic and energy levels, the EU will provide monetary assistance to the Syrian refugees in Turkey and the customs union deal will be updated. Lastly, the union promised to speed up the process of visa liberalization for Turkish citizens.

At a summit on March 18, 2016, the third meeting between the two, the visa issue was raised once again, and it was decided to be applied at an even earlier date, on June 2016. However, in order for the process to start on the envisaged date, the European Commission was supposed to present the third and last visa progress report and an offer of visa liberalization to the EU Council and European Parliament at the latest in May.

This meant that Turkey was supposed to fulfill its own part of the deal until the end of April. Despite the fact that Turkey completed its part successfully, no progress has been achieved regarding visa liberalization.

"We expect sincere cooperation from the EU, especially when it comes to the fight against terrorism," Çavuşoğlu expressed in the conference and added: "Our recent reforms (referring to the Human Rights Action Plan) will contribute to a new era in Turkey-EU ties."

During a meeting in Brussels on Dec. 10, 2020, EU leaders decided to draw up a list of Turkish targets to sanction. While France, Greece and the Greek Cypriot administration have pushed hardest for a tough line on Turkey, other EU states led by economic powerhouse Germany have so far been keen on a more diplomatic approach. As a result, the bloc decided to hold off on the sanctions, easing the tense ties.

Turkey is ready to set a "positive agenda" with the European Union, including a long-term perspective, President Recep Tayyip Erdoğan said last month, underlining that relations must be put back on track. The president reiterated that Turkey prioritizes the EU in its agenda and sees its future in Europe. Turkey hopes to start afresh with the bloc in the new year, Erdoğan said in a statement, adding that interactions with the EU in 2020 were unproductive due to the artificial problems created by certain EU members.

Other than the bilateral ties between Brussels and Ankara, four topics are expected to dominate the agenda, including updating the migrant deal with the EU, visa liberalization for Turkish citizens, updating the customs union with the EU and Turkey's proposal for an Eastern Mediterranean conference.

In light of the 10th year of the Syrian civil war, the foreign minister reiterated that the Syrian regime still refuses to support a political solution in the country.

"A secure environment needs to be established in Syria in order for displaced Syrians to have a safe country to return to. We offered this in our renewal offer to the migrant deal with the EU," Çavuşoğlu highlighted.