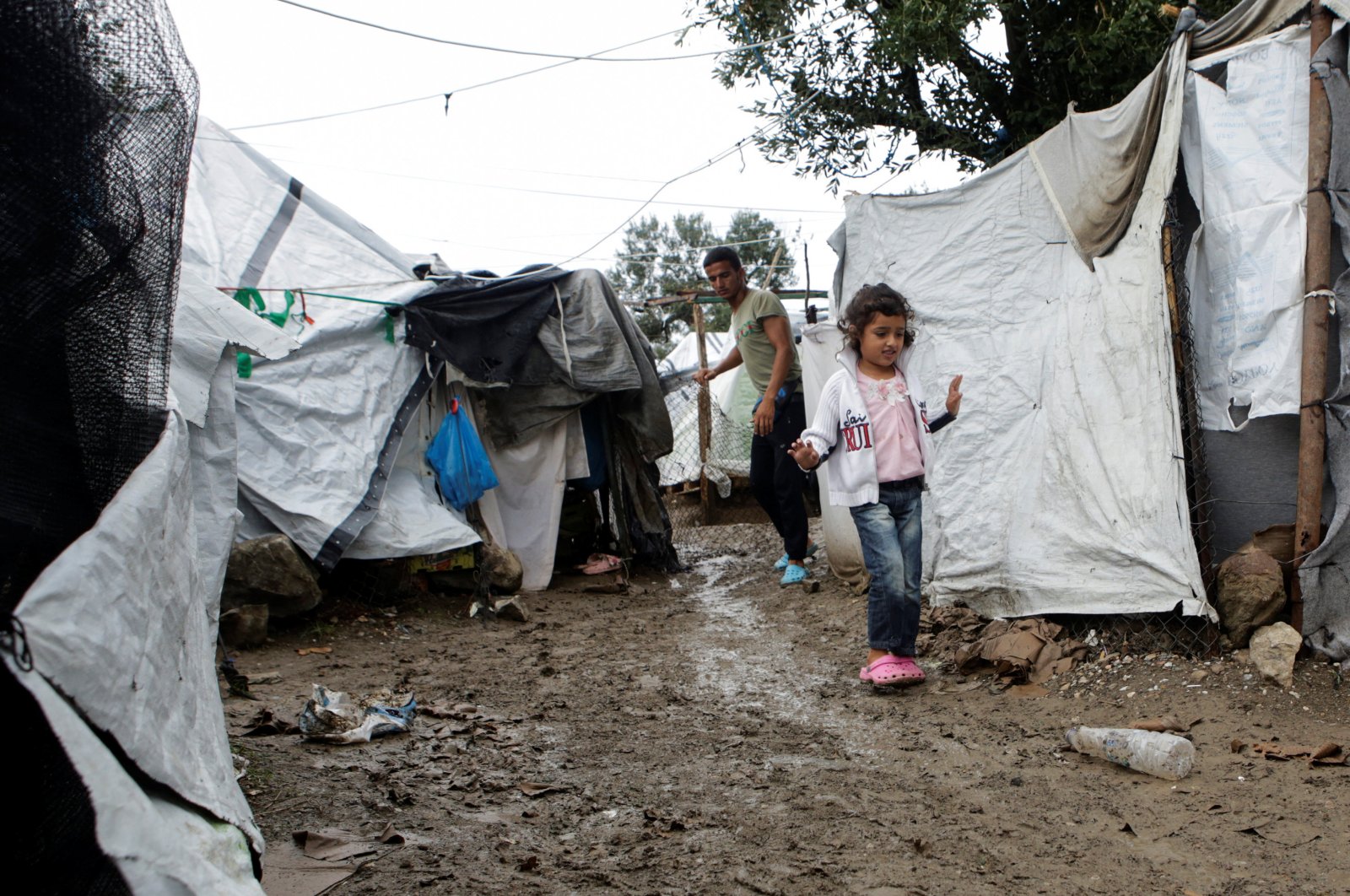 A girl makes her way next to tents at a makeshift camp for refugees and migrants next to the Moria camp, following a rainfall on the island of Lesbos, Greece, October 8, 2019. (REUTERS Photo)
by Daily Sabah with Reuters
Mar 25, 2020 10:54 am

The European Union has asked Greece to move migrants most at risk of contracting the coronavirus from squalid, overcrowded camps on its Mediterranean islands, the EU's top migration official said Tuesday.

Home Affairs Commissioner Ylva Johansson said Athens had opposed moving the migrants to the Greek mainland, citing the absence of coronavirus cases in the camps, while the disease spreads elsewhere in Greece.

With much of Europe in lockdown under measures to curb the spread of the virus, Johansson said the elderly, sick and others most at risk of infection could be moved to other areas on the Greek islands.

"We are working together with the Greek government and Greek authorities to agree on an emergency plan to help reduce the risk as much as possible in the overcrowded hot spots on the islands," Johansson said in a telephone interview.

"It could be the relocation of the most vulnerable individuals from the overcrowded camps to other areas on the islands."

The situation in the camps is dire at the best of times. They are designed for several thousand people, but the European Commission, the EU executive, says they house about 42,000.

Rights groups frequently sound the alarm about conditions that aggravate the suffering of people mainly fleeing war and poverty in the Middle East and Africa, and looking for better lives in Europe.

The situation has become even tenser since Greece last week imposed restrictions on the movement of people living in the camps to combat the spread of the coronavirus.

"Thousands of people, including older people, those with chronic diseases, children ... pregnant women, new mothers, and people with disabilities, are trapped in dangerously overcrowded, deplorable conditions on the islands amid the COVID-19 pandemic," Human Rights Watch said Tuesday, referring to the illness that the coronavirus can cause.

"Forcing asylum-seekers to remain in conditions that violate their rights and are harmful to their well-being, health and dignity cannot be justified on grounds of public health," the New York-based group said in a statement.

Greece has said it receives insufficient EU help in caring for the migrants arriving across the Mediterranean from Turkey, which has recently allowed more refugees and migrants, many of them from Syria, to leave its territory for Europe.

The latest humanitarian crisis in northwestern Syria's Idlib, caused by Bashar Assad's attacks on civilian-populated areas, has forced nearly 1 million people to move near the Turkish border for refuge. The renewed attacks risked another wave of migration to Turkey, which already hosts 3.7 million Syrian refugees and says it cannot take in any more. In addition, 34 Turkish soldiers were killed by forces of Assad's regime. The Turkish soldiers were working to protect local civilians under a 2018 deal with Russia, under which acts of aggression are prohibited in the region.

The international human rights groups criticized a decision by Athens to suspend new asylum applications until April and summarily deport those arriving in the last month's surge. Also, inhumane conditions in Greece’s refugee camps have been another point heavily criticized.

To assuage both Athens and Ankara, the EU promised earlier this month to take in some 1,600 unaccompanied children from the camps. Johansson said that has not happened yet and that Greek authorities still needed to identify the minors.

"My hope is that we can start with the relocation in the coming weeks," she said.