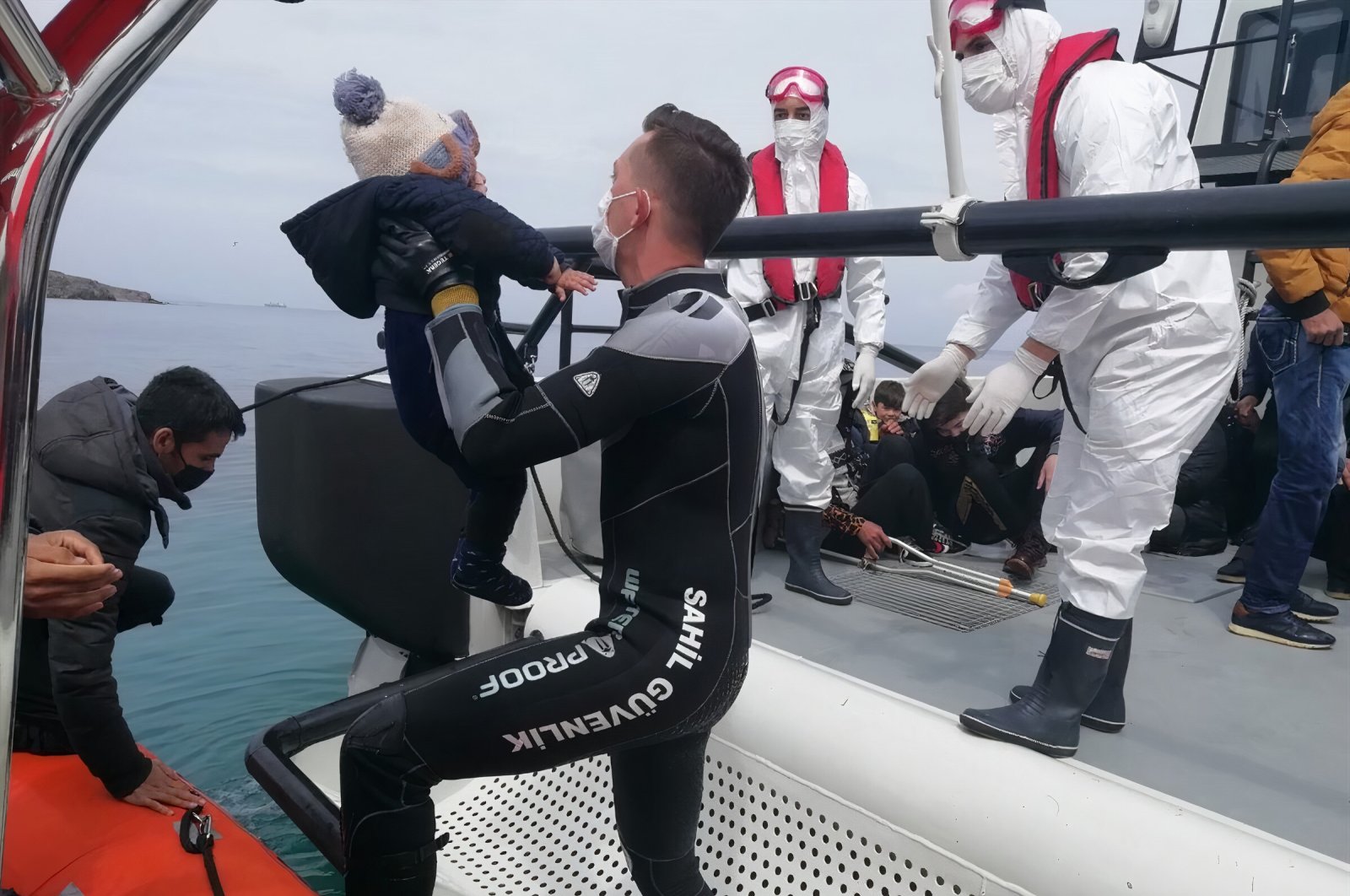 A total of 48 asylum-seekers attempting to reach Greece from Turkey's Balıkesir province's Ayvalık were rescued by the Turkish Coast Guard Command, in Ayvalık, Turkey, April 16, 2021. (AA Photo)
by DAILY SABAH Apr 18, 2021 11:23 am
RECOMMENDED

"Greek Law Enfor. Agencies seek to burn people, pouring gasoline on them, which indicates a massacre under the watch of Europe," Soylu said on Twitter.

"Europe shall go down in history as instigator of this malignancy, by spoiling Greece and keeping silent to what's going on there @EU_Commission," he added, criticizing the bloc once again for ignoring Greece’s acts toward migrants.

Turkish Coast Guard Command announced Saturday that it rescued 41 asylum-seekers in the Aegean Sea who were pushed back into Turkish territorial waters, with one person set on fire by the Greek coast guard.

The command said on its website that coast guard teams were dispatched to rescue asylum-seekers early Saturday off the Çeşme district in Izmir province.

An asylum-seeker with burns on his leg was handed over to emergency medical personnel.

Speaking about the incident in the video, one of the victims said: "There was a woman. She said, 'You go.' But we did not go. She brought oil, spilled it over us and set us on fire. The police said, 'You got burnt because you did not go to Turkey.'"

"They brought us here with our own boat and left us at the sea," the victim added.

In recent years, Turkey and Greece have been key transit points for migrants aiming to cross into Europe, fleeing war and persecution to start new lives.

Soylu similarly criticized the body two weeks ago, saying that Frontex is a disgrace for Europe.

"Of course, irregular migration is a crime, but people who resort to this method do not lose their rights of being a human. Stripping the captured illegal migrants naked, tying their hands with plastic handcuffs and throwing them to die in the freezing waters of the Aegean Sea in the middle of winter without their shoes, there is nothing compatible with either law, humanity or any other value.”

“Europe, unfortunately, formed a joint agency for their own borders called Frontex. But, what it actually formed was an agency of inhumanity,” he added.