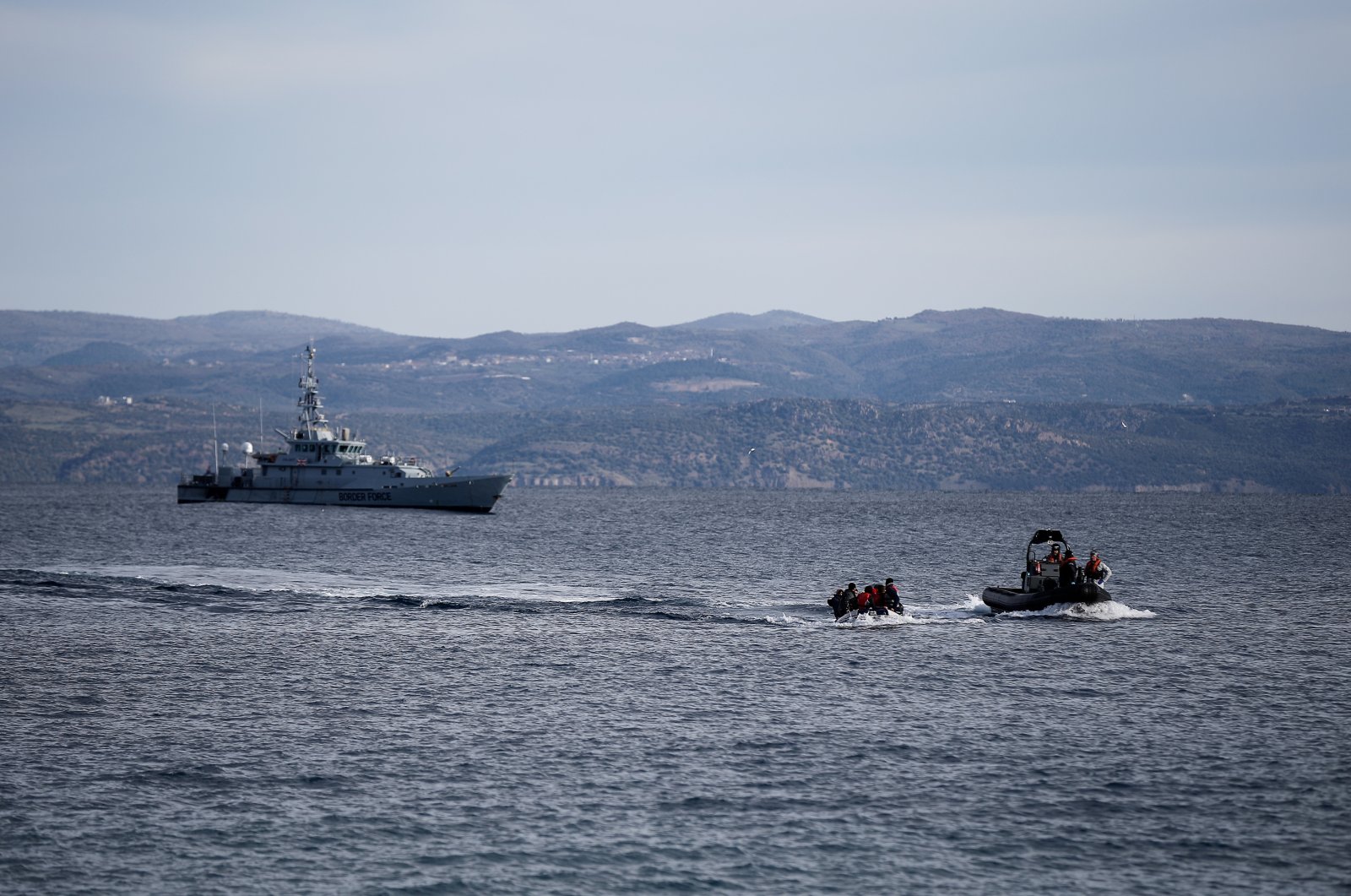 A rescue boat escorts a dinghy with migrants from Afghanistan as a Frontex vessel patrols in the background, on the island of Lesbos, Greece, Feb. 28, 2020. (Reuters File Photo)
by Anadolu Agency
Oct 14, 2021 10:13 am

EU institutions have been unwilling to take action against the illegal pushbacks of migrants and refugees on European borders, a network of nongovernmental organizations (NGOs) said.

The European Council on Refugees and Exiles (ECRE), a European network of 103 NGOs in 39 European countries, told Anadolu Agency (AA) there is an unwillingness of EU institutions to act because the general strategy is based on the prevention of arrivals of people seeking protection, regardless of the costs and consequences.

Some EU countries have been involved in constant pushback practices in recent years in the name of fighting irregular migration. Numerous cases of pushbacks have been recorded, especially from Greece, Croatia and recently Poland and the Baltic countries.

"The latest reports add to the mountain of evidence about violent pushbacks at the EU's borders. It is clear that states are using all means possible, including extreme violence, to prevent access to EU territory and access to asylum procedures," Catherine Woollard, the director of ECRE, told AA.

Many of the actions taken by European countries against asylum-seekers and refugees are illegal under EU and international law and "morally abhorrent," said Woollard.

"However, states are able to act with near impunity. This is for legal and political reasons: It's difficult to mount a legal challenge due to the precarious position of the people affected. Even when we reach that stage, there is a failure of states to implement judgments," she added.

Woollard said that EU member states are praised for their actions, "as in the shameful comments from the director of (the European Border and Coast Guard Agency) Frontex on Poland. We can talk of the complicity of parts of the EU in these actions."

On the other hand, states use security as a concept to justify their actions, said Woollard, adding "refugees attempting to cross a border is not a major security threat to Europe, nor is it perceived as such by the European public."

"These actions are however a threat to European law, the rule of law in general, to European values and to basic human decency, as well as probably undermining European security in the long term," she said.

"We urge states to heed the recommendations of international organizations, their own statutory watchdog bodies such as ombudsman offices, and NGOs, and to cease these violent practices. Also to resist the culture of tolerance of violent abuse that has developed. Journalists, NGOs and IGOs (intergovernmental organizations) will continue to document (these practices) in order to hold to account those responsible."

A U.N. Human Rights office spokesperson said Tuesday her office is receiving "mounting evidence" of recent pushbacks of asylum-seekers from Greece to Turkey.

"Pushbacks are illegal under international law and should not happen," U.N. High Commissioner for Human Rights spokesperson Marta Hurtado said at a U.N. press conference.

"Every person, every migrant trying to cross an international border has the right of an individual assessment," Hurtado said.

Answering a question from AA about the pushbacks, Hurtado said her office is currently talking with the EU.

"For a few months, we've been trying to confirm and see what the EU should do to stop the undertaking of these pushbacks on the external borders," she said.

Speaking to reporters ahead of a meeting of EU home affairs ministers in Luxembourg, Johansson said she expects Greece to "take it seriously, do the investigation and find out what really happened."

At Tuesday's news conference, Hurtado said her office is "extremely worried about the continued suffering of migrants and asylum-seekers in Libya who are experiencing a myriad of daily violations and abuses."

"We also call on the Libyan authorities to release all arbitrarily detained migrants and asylum-seekers, cease the raids on their settlements, halt evicting them and stop criminalizing them," Hurtado said.

"We encourage the authorities to reform the legislation to decriminalize irregular entry, stay, and exit of people," she added.