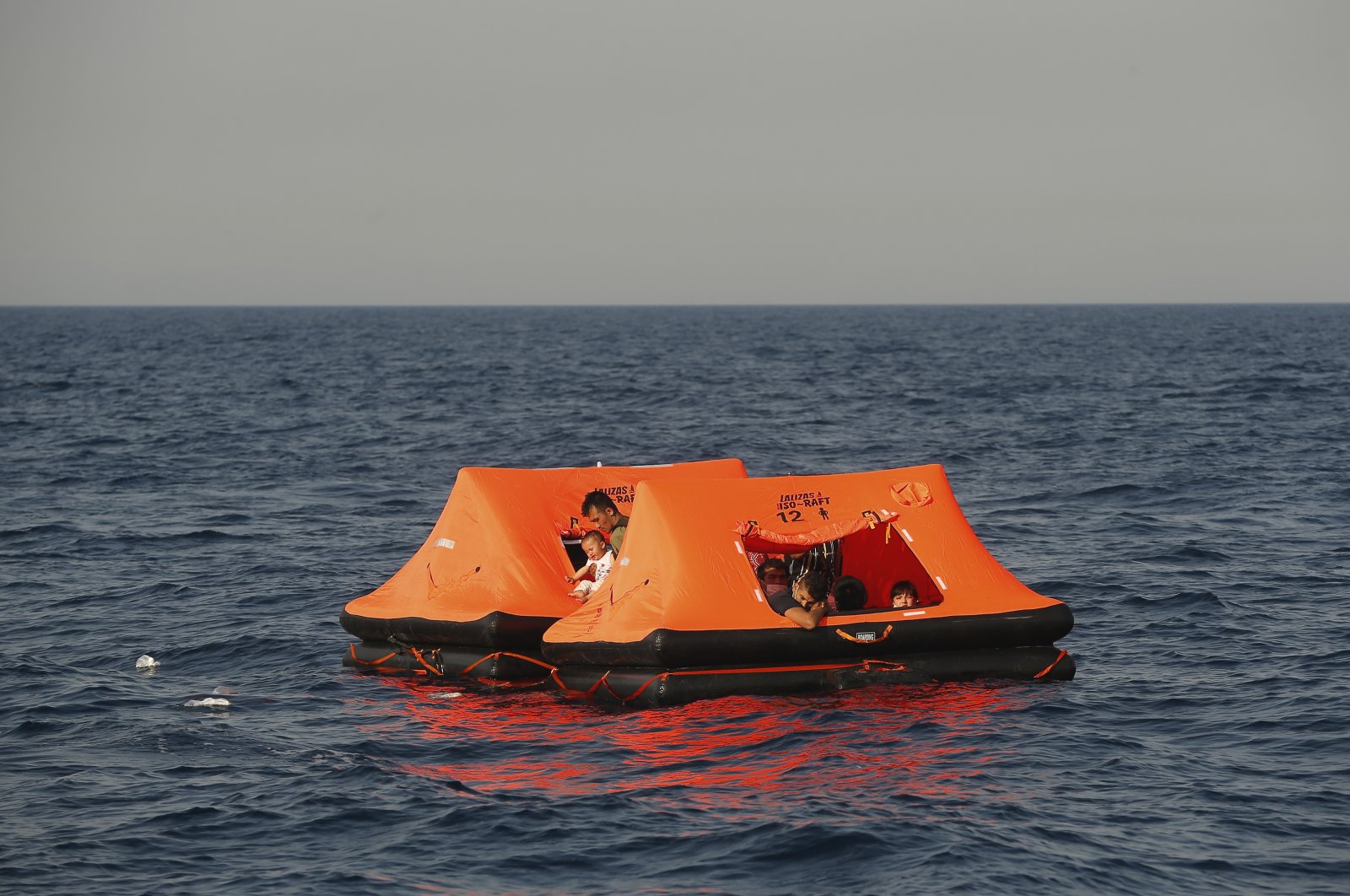 Afghan migrants pushed back by the Greek coast guard wait inside a life raft during a rescue operation by the Turkish coast guard, in the Aegean Sea, between Turkey and Greece, Sept. 12, 2020. (AP File Photo)
by Daily Sabah with AFP Jan 28, 2021 11:09 am
RECOMMENDED

The United Nations expressed concern about the increasingly frequent pushbacks and expulsions of migrants and refugees at Europe’s borders, warning that the very idea of asylum itself was under attack on the continent.

The United Nations refugee agency called on countries to create independent monitoring mechanisms to ensure the right to seek asylum and to investigate violations.

The European Union’s border service Frontex has been under fire for helping the Greek coast guard block and push back migrants and refugees who have reached Greek territorial waters instead of rescuing them, according to video footage shared by Turkish authorities.

Gillian Triggs, United Nations High Commissioner for Refugees' (UNHCR) assistant high commissioner for protection, said the agency had “received a continuous stream of reports of some European states restricting access to asylum, returning people after they have reached territory or territorial waters, and using violence against them at borders.”

“The pushbacks are carried out in a violent and apparently systematic way,” she lamented.

“Boats carrying refugees are being towed back. People are being rounded up after they land and then pushed back to sea. Many have reported violence and abuse by state forces.”

The UNHCR also warned that people arriving by land were also being informally detained and forcibly returned to neighboring countries “without any consideration of their international protection needs.”

For instance, Greece ordered its coast guard to push migrants into Turkish territorial waters, according to a string of emails exchanged between the European Union border agency Frontex and the Greek coast guard.

Greek officials claim that they comply with international law and that the allegations in question are not true, although emails with Frontex clearly documented the pushback instructions.

Numerous reports by journalists, researchers and witnesses have also cataloged the way in which migrants and asylum-seekers have been forced back across the border to Turkey or left stranded in the Aegean Sea without aid by the Greek coast guard, despite the conservative government’s denials in Athens.

Frontex has denied being involved in the pushbacks despite the evidence.

The 1951 Refugee Convention, the European Convention on Human Rights and EU law requires states to protect people’s right to seek asylum and protection, even if they enter a country illegally, the agency pointed out.

International law also protects against so-called refoulement – returning asylum-seekers to places where they risk persecution and torture, it said.

“Respecting human lives and refugee rights is not a choice, it’s a legal and moral obligation,” Triggs stressed.

“While countries have the legitimate right to manage their borders in accordance with international law, they must also respect human rights.”

“Pushbacks are simply illegal,” she said.

The UNHCR said it had made its concerns clear to European countries and had called for “urgent inquiries into alleged violations and mistreatment.”

The agency pointed out that the number of migrants, refugees and asylum-seekers arriving in Europe has been steadily declining.

“With so few arrivals to Europe, this should be a manageable situation,” the UNHCR said.

“It is regrettable that the issue of asylum remains politicized and divisive despite such declining numbers.”

The agency said it realized some European countries were carrying a “disproportionate responsibility” in taking in new arrivals and called on other countries on the continent to do their share and demonstrate “solidarity.”

It also urged European countries to uphold commitments to refugee protection, meaning they should admit asylum-seekers at their borders, rescue those stranded at sea and allow them to promptly disembark.

The UNHCR has repeatedly lambasted countries that close their doors to desperate refugees – in particular European nations that have left migrants stranded at sea for long periods of time and supported the repatriation to chaos-wracked Libya.