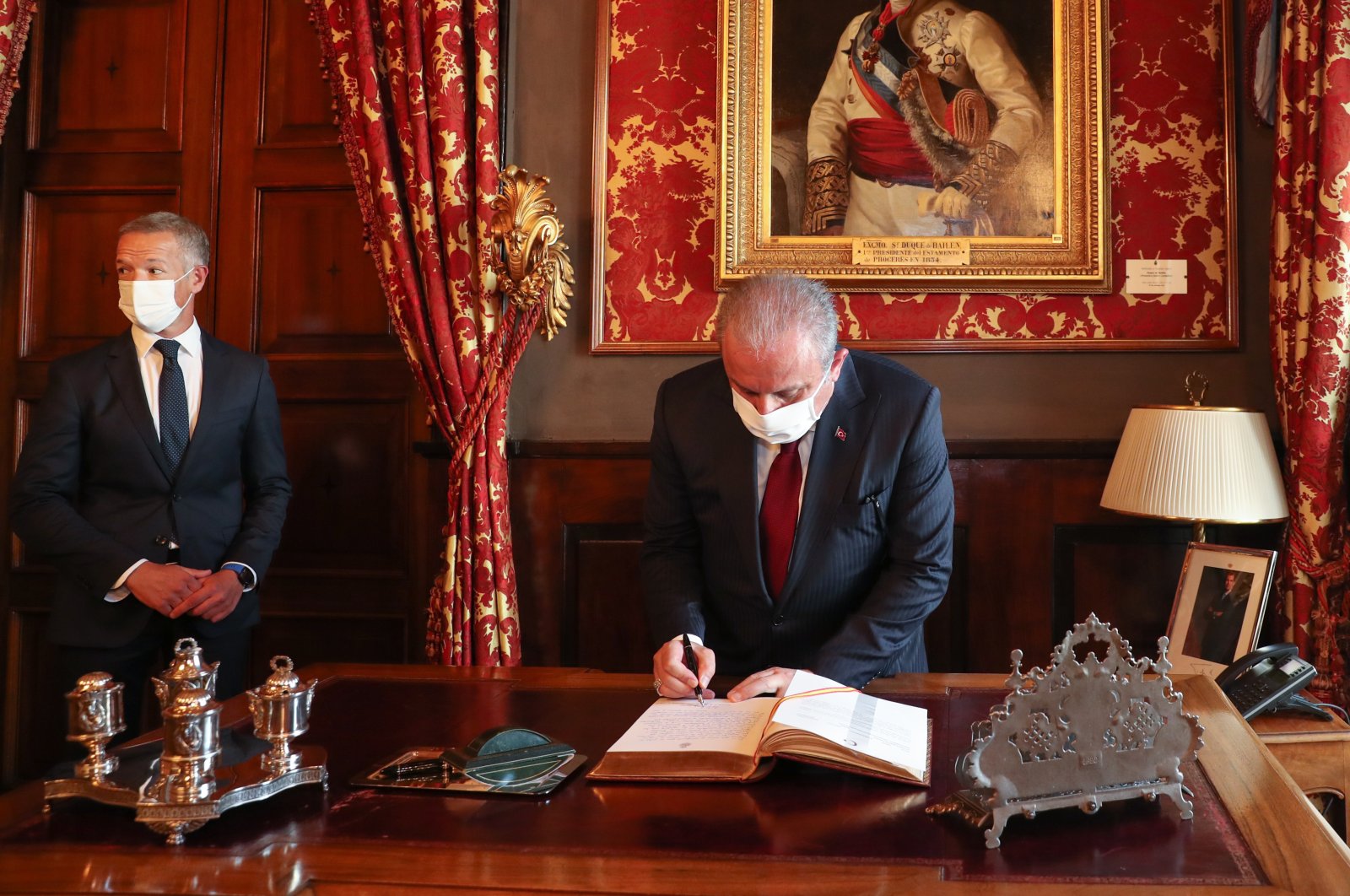 Parliament Speaker Mustafa Şentop Tuesday criticized the European Union’s policies on migration, the Eastern Mediterranean and Islamophobia during a visit to Spain.

Şentop's visit is the first in over 27 years by a Turkish parliament speaker to Spain.

Speaking to Turkish and Spanish journalists, Şentop highlighted that the bloc does not completely abide by the 2016 migrant deal regarding Syrian refugees.

“Turkey does not have to shoulder this humanitarian burden. Those that created this problem must also get involved and take responsibility. Otherwise, bigger gaps will take place in conflicts, economic imbalances, inequalities and new migration waves will happen,” he explained.

Şentop had previously warned that a new migration influx is “inevitable” if the EU does not keep its promises to Turkey regarding the issue.

"As long as the EU does not deliver on its promises and take the necessary humanitarian initiatives, the wave of migration cannot be avoided," Şentop underlined. "Turkey cannot take in more migrants. Everyone has to shoulder their share of responsibility," he added.

Turkey has been a key transit point for irregular migrants attempting to cross into Europe to start new lives, especially those fleeing war and persecution, such as from the Syrian civil war. Through its March 2016 agreement with the EU, Turkey was instrumental in bringing down migrant numbers and alleviating the crisis.

Turkey is continuing efforts to bolster the security of its border with Iran to prevent any new migrant wave in the face of the recent developments in Afghanistan. The strengthened border measures in Turkey, which already hosts nearly 4 million Syrian refugees and is a staging post for many migrants trying to reach Europe, began as the Taliban started advancing in Afghanistan and took over Kabul last month.

Authorities say there are 182,000 registered Afghan migrants in Turkey and up to an estimated 120,000 unregistered. Erdoğan urged European countries to take responsibility for any new influx, warning that Turkey had no intention of becoming "Europe's migrant storage unit."

Çavuşoğlu had recently highlighted the importance of taking joint action to deal with the migrant crisis, as he urged the European Union to properly implement the terms of the 2016 deal and undertake burden-sharing responsibilities. Şentop said that Turkey is in talks with countries neighboring Afghanistan in the case of a possible migration wave.

“We want an administration to be formed in Afghanistan under which people will not leave the country,” he said, adding that Turkey closely follows the developments in the country.

The Taliban recently declared the war in Afghanistan over after taking control of the presidential palace in Kabul, sending Western nations scrambling to evacuate their citizens amid chaos at the Kabul Hamid Karzai International Airport as frantic Afghans searched for a way out.

Meanwhile, Şentop also touched on the problems in the Eastern Mediterranean and criticized countries getting involved in the issue that are not part of the immediate region.

“If there would be a similar situation in the western Mediterranean and several countries would conduct searches on the coasts of France then they would be disturbed,” highlighted Şentop.

Şentop further vowed that Turkey will defend its rights under international law.

France has strongly backed Greece and the Greek Cypriot administration in a growing standoff with Turkey over hydrocarbon resources and naval influence in the Eastern Mediterranean that has sparked fears of conflict.

Şentop also spoke on increasing Islamophobia in the EU, saying that the situation is becoming more dangerous.

Turkish officials, including President Recep Tayyip Erdoğan, have frequently urged European decision-makers and politicians to take a stance against racism and other types of discrimination that have threatened the lives of millions of people living within the bloc’s borders. Racist attacks targeting Muslims or immigrants in Europe increasingly make the headlines as white supremacists become more efficient in an age where their ideals, or at least parts of them, are going mainstream. There is no single large group orchestrating these attacks against Muslims and immigrants. Rather, individual attacks lead to more copycat attacks.

Under the pretext of freedom of speech, the tolerant political climate has helped far-right sympathizers with violent tendencies expand their support.