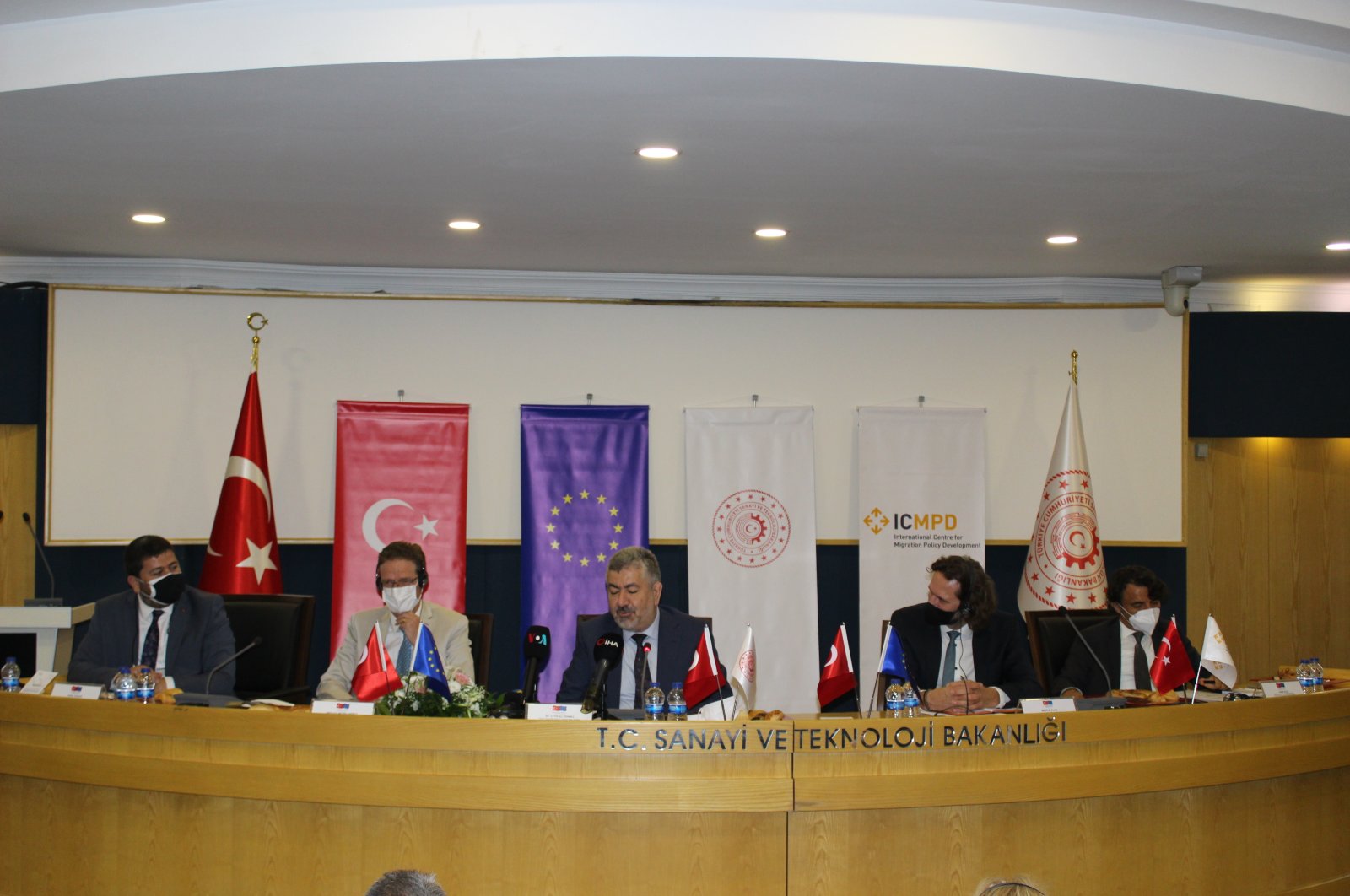 Senior officials from the ICMPD, the EU and Turkey's Ministry of Industry and Technology are seen in this photo during a press conference in Ankara, Turkey, July 2, 2021 (Photo Courtesy of the ICMPD)
by Dilara Aslan Jul 02, 2021 1:45 pm
RECOMMENDED

“Over a decade, Turkey has been hosting an enormous number of migrants, Syrians under temporary protection as well as other asylum-seekers. The current complex migration situation in Turkey requires a continuous and comprehensive reaction led by national institutions,” Pluim stated during a program in coordination with the European Union and the Technology and Industry Ministry in the capital Ankara.

“The Syrian crisis requires a concerted effort to find durable solutions for refugees at national and regional levels,” he added, stressing that one country alone cannot manage the existing migration situation and apply all the possible solutions.

Grant schemes for the project Enhancement of Entrepreneurship Capacities for Sustainable Socio-Economic Integration (ENHANCER) were announced during the meeting to further aid the integration of migrants and support the entrepreneurship ecosystem in Turkey.

“While on one side we are aiming to strengthen the resilience of Syrians under temporary protection, on the other side, we consider that the management of the current forced migration situation will also be able to contribute to the development of local economies of Turkey,” Pluim pointed out.

The main aim of the projects is to consider local entrepreneurial ecosystems as the most effective and inclusive ecosystems for host communities and Syrians under temporary protection, to improve the policymaking and the coordination of the policy implementation at the national level and to increase employment opportunities for the Syrians and local host communities by strengthening the performance of the market operators.

Three grant schemes were announced during the program, the first of which is to create or develop already available entrepreneurship centers for the joint use of the local community and Syrians, while the second one aims to remove the technical and humanitarian capacity deficiencies of institutions of the local entrepreneurship ecosystem. The third one is a scheme for small- and medium-sized enterprises eyeing to increase their employment capacities.

Pluim told Daily Sabah that the ENHANCER project so far has done a lot of “preparatory work to establish a framework, carried out background search, defined the industries which we believe will be the most successful. Within a year we have accumulated a whole database of information and established procedures. We are very confident that in the coming years we will be able to hand out the grants to deserving parties and make sure they get the support they need.”

Tamer Kılıç, the regional coordinator for the ICMPD, elaborated that 60% of the grant schemes can be used by Syrians and 40% by Turkish citizens. He added that the total project budget is 32.6 million euros ($38 million) of which 17.1 million euros is reserved for grants for entrepreneurs and local institutions.

Kılıç added that the program will be implemented in 11 provinces of Turkey where there's a higher density of Syrians. “The grant schemes aim to contribute to Turkey’s production.”

Head of the EU delegation to Turkey, Nikolaus Meyer-Landrut, stated that the implementation of the projects is taking place under “challenging circumstances during the pandemic.”

“Activities under these grant schemes, which are launched today, shall enable the development of new and growing businesses, provide sustainable jobs, livelihoods, develop a sustainable institutional framework,” he said, commending Turkey’s efforts as a host of Syrian refugees and stating that the bloc will continue to support Ankara in this regard.

Turkey is hosting the largest number of refugees in the world with around 3.6 million Syrians that fled the civil war in the country.

In addition to 33,000 university students, more than half a million Syrian children are enrolled in schools across Turkey, according to the U.N. children's organization UNICEF. At these schools, the children learn the Turkish language as well as other disciplines.