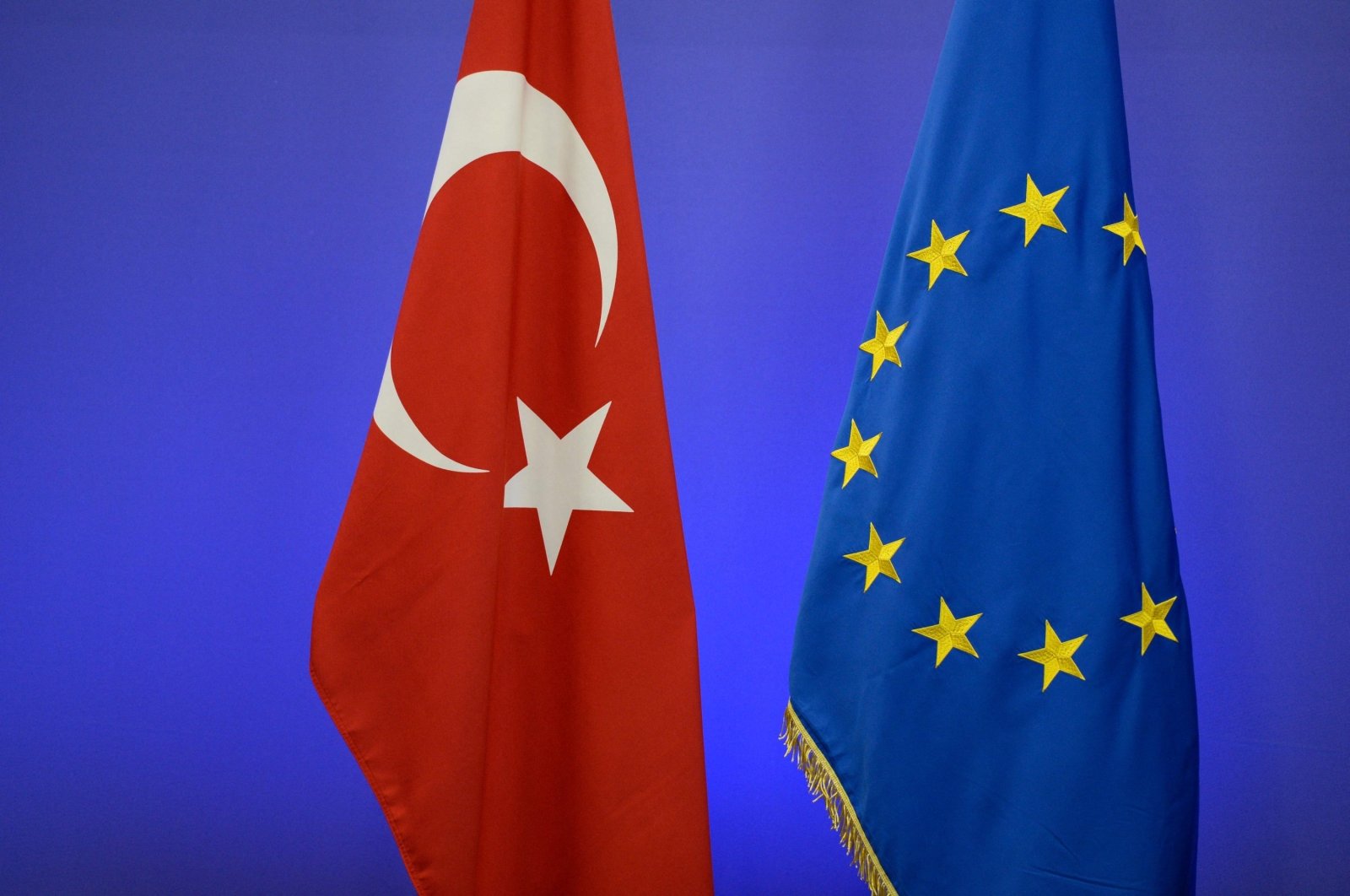 The Turkish national flag (L) and the EU flag stand ahead of a summit on relations between the European Union and Turkey in Brussels, Belgium, Nov. 29, 2015. (AFP File Photo)
by Anadolu Agency Oct 19, 2021 11:25 pm
RECOMMENDED

The Turkish Foreign Ministry on Tuesday blasted the EU Commission's 2021 report on Turkey's membership process, saying it once again reflected the double standard approach toward the country.

The ministry said in a written statement that the report on the enlargement strategy "unfortunately" overlooked responsibilities toward Turkey at a time when the Ankara government had revived high-level dialogue with the EU and sought to develop a better political agenda with the bloc.

According to the statement, Turkey rejected the inclusion of "inconsistent and biased" Greek and Greek Cypriot theses in the report, as it did in the previous years.

Turkey does not accept baseless and unfair criticism especially in the chapters of political criteria along with judiciary and basic rights, the ministry said, adding that the EU came up with unproportionate findings without evaluating the conditions specific to Turkey with regards to the country's governance, political system, basic rights, and fight against terrorism.

The statement added that the EU approach did not take threats – such as the YPG/PKK, Gülenist Terror Group (FETÖ), and Daesh terrorist groups' threats against Turkey – into account. The EU approach served no other purpose than to please "radical" circles in Europe that are against EU and Turkey, it also said.

Referring to the deal reached on March 18, 2016, the ministry said the report solely focused on the migration part of the agreement. While it praised Turkey for its efforts in the context of migration, it did not mention the EU's obligations in this regard, and it was unacceptable that the EU only sought to cooperate with Turkey based on its sole interests in certain fields, added the ministry statement.

The ministry also underlined that it was yet another EU inconsistency that the report claimed a decrease in Turkey's compliance with the EU policies and the emergence of new conflicts of interests while the bloc was obstructing existing high-level dialogue and cooperation mechanisms on subjects such as foreign policy, regional developments, security, defense, and sectoral matters.

It was further noted that the EU was not authorized to draw conclusions on the issues of the Eastern Mediterranean, the Aegean and Cyprus and it included either inconsistent or pro-Greek or Greek Cypriot theses in the report, which were rejected by Turkey.

While Turkey does its part of the bargain fairly so as to de-escalate the tension, initiate dialogue and cooperation, the EU persistently refuses to acknowledge the rights of Turkey and the Turkish Cypriots, said the statement, arguing that this biased and unfair approach of the EU added to the tensions let alone offering a solution. This approach undermined the EU ambition to be a regional and global power, it also noted.

The ministry said it welcomed that the report highlighted the development of the Turkish economy and it was moving toward pre-crisis level thanks to the measures adopted as part of efforts to contain the COVID-19 outbreak but the EU did not have the right to remind Turkey of its obligations while politicizing the update of the Customs Union, especially at a time when state interference in the economy has risen to eliminate the negative impact of COVID-19 on finance.

Recognizing Turkey as a key partner to the EU in essential areas of joint interest, including counter-terrorism, economy, trade, energy and transport, the report underlined that dialogue and cooperation between the bloc and Turkey increased in 2021.

The report also reiterated that the EU has a strategic interest in a stable and secure environment in the Eastern Mediterranean as well as the development of a cooperative and mutually beneficial relationship with Turkey.

However, the EU, in line with the Greek and Greek Cypriot line of arguments, accused Turkey of obstructing the vessel Nautical Geo from conducting a survey in the region and Turkey and the Turkish Republic of Northern Cyprus (TRNC) of "changing the status" of the Varosha (Maraş) area, which is within the borders of the TRNC.

The EU remains determined to use the instruments and options at its disposal to defend its interests and those of its member states as well as to uphold regional stability, the report warned.

Similarly, the report seems to have adopted the Greek line of argument regarding the maritime jurisdiction agreement that was signed between Turkey and the elected, legitimate Libyan government in November 2019. As such, the report argued that the Libyan-Turkish agreement, which it regarded as a violation of the sovereign rights of third states, does not comply with the Law of the Sea and bears no legal consequences for third states.

The report, on the other hand, was more positive concerning Turkey's hosting millions of refugees and praised the country's efforts to meet the needs of the world's largest refugee community.

Referring to the EU-Turkey Statement of March 2016 on irregular immigration, the report remarked that Turkey continued to play a key role in addressing migration along the Eastern Mediterranean route and hosting the largest refugee population in the world.

The bloc also welcomed the ratification of the Paris Agreement on climate change by Turkey and said it looks forward to engaging with Turkey on the implementation of the European Green Deal.