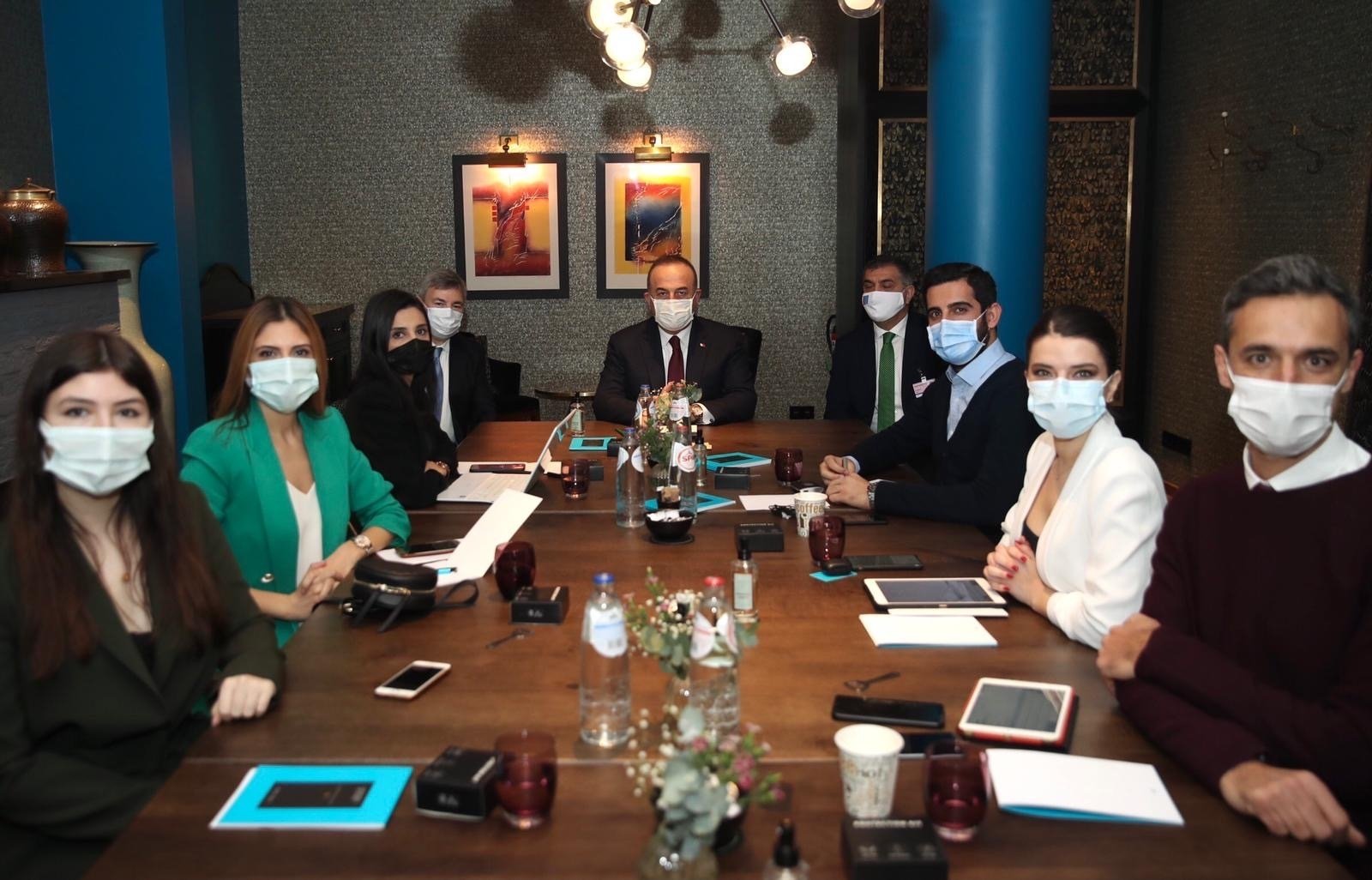 Foreign Minister Mevlüt Çavuşoğlu together with journalists in Brussels, Belgium, Jan. 22, 2021. (Courtesy of the Foreign Ministry)
by Dilara Aslan Jan 23, 2021 10:02 am
RECOMMENDED

At the end of a busy diplomatic week in Brussels, Foreign Minister Mevlüt Çavuşoğlu said that Turkey and European Union officials agreed to further enhance dialogue and engage in concrete actions while both sides voiced a consensus on the need to renew the March 18 migration deal, aimed at reducing the influx of irregular migrants toward Europe.

“The positive atmosphere in Turkey-EU ties first started with positive rhetoric, then continued with dialogue and has to be supported now by concrete acts to be permanent,” Çavuşoğlu told reporters Friday. He added that Turkey wanted to build up on the positive atmosphere that was reached following a December EU leaders meeting and was not calling for improved relations for the fear of sanctions.

He added that now EU officials are expected to visit Turkey as soon as possible.

While Eastern Mediterranean tensions caused by maritime borders and drilling rights were the main agenda of bilateral ties in 2020, Turkey aims to address other significant issues concerning Brussels and Ankara in 2021 which include the issue of migration, accession negotiations as well as the fight against terrorism.

Saying that the issue of migration is not limited to financial aid but has also other branches such as the relocation of Syrian migrants to EU countries and the voluntary return of Syrian citizens to safe areas in their country, Çavuşoğlu said EU officials agreed to the need to update the March 18 statement, which needed to be “applicable.”

“We see indicators that the number of irregular migration might increase in the upcoming future,” the top diplomat pointed out.

Within the framework of bilateral relations, Çavuşoğlu said that Turkey’s expectations included the revival of accession talks and that Ankara be treated not as part of the EU’s foreign policy but as a negotiating candidate member.

Turkey and EU member Greece have been at odds on several issues. Turkey, which has the longest continental coastline in the Eastern Mediterranean, has rejected maritime boundary claims made by Greece and the Greek Cypriot administration, stressing that these excessive claims violate the sovereign rights of both Turkey and the Turkish Republic of Northern Cyprus (TRNC). Instead of opting to solve problems with Ankara through dialogue, Athens has, on several occasions, refused to sit at the negotiation table and opted to rally Brussels to take a tougher stance against Turkey.

During a meeting in Brussels on Dec. 10, EU leaders decided to draw up a list of Turkish targets to sanction. While France, Greece and Greek Cyprus have pushed hardest for a tough line on Turkey, other EU states led by economic powerhouse Germany have been far keener for a more diplomatic approach.

But since then, the rhetoric on all sides has mellowed dramatically as Turkey and the bloc voiced its intent to "turn a new page."

Participation of both Cypriot sides needed

In order to solve the dispute in favor of all countries, Turkey last year proposed to hold a conference with the participation of each Mediterranean nation, including the Turkish Cypriots; yet no concrete answer has been given by the EU regarding the proposal.

“We want both communities to attend the Eastern Mediterranean conference, however, if it will not be possible for them to attend the main meeting, we can get them together in a separate format,” Çavuşoğlu said.

He reiterated that a fair distribution of natural resources in the region must be made between the Turkish and Greek Cypriot sides and said that the EU "disregarded the rights of the Turkish side." "We conveyed to them that this trust needs to be re-established," he added.

Çavuşoğlu said Turkey, Greece, Britain – the island's guarantor powers – and the United Nations would convene the talks with the two Cypriot sides in late February or early March, with the European Union as an observer.

On the other side, in an important move, Greece and Turkey agreed to restart long-stalled exploratory talks on their maritime dispute next week Monday, after a four-year pause.

Yet Çavuşoğlu voiced that Greece had to refrain from provocative acts ahead of the meeting. Both sides have to review the past 60 talks where there are disagreements and consensus, Turkey’s top diplomat said. He reiterated that only picking one topic of a web of problems and disregarding all other bilateral issues that need solving would cause further tensions in the future.

Turkey has demanded that the host of disagreements it has with Greece be handled as a whole. Those include territorial waters in the Eastern Mediterranean, the continental shelf, demilitarization of the islands, the legal status of geographical formations, the width of national air space and search and rescue operations while Greece only wants to address the demarcation of maritime zones in the Aegean and the eastern Mediterranean.

“The first meeting will help to see their real thoughts and their positions,” Çavuşoğlu said.

These talks continued regularly up until 2016. However, since that date, both due to the political conjecture and the Greek side's reluctance, there have not been any new rounds.

NATO members Turkey and Greece also engaged in deconfliction talks last year, launched through the efforts of Secretary-General Jens Stoltenberg and designed to reduce the risk of incidents and accidents in the Eastern Mediterranean. The process included the creation of a hotline between Athens and Ankara to facilitate conflict resolution at sea or in the air.

Çavuşoğlu came together with Stoltenberg Friday in which ties with Athens were discussed.

“They discussed NATO’s ongoing efforts on the de-confliction mechanism to reduce the risks of incidents and accidents in the Eastern Mediterranean, as well as other security issues,” Oana Lungescu, spokesperson of NATO stated on Twitter.

Çavuşoğlu also reiterated Turkey’s will to form a commission to clarify any technical issues on the issue of S-400s during his meeting with Stoltenberg.

US relations: ‘Threats no solution’

Speaking on the comments of U.S. President Joe Biden's candidate for secretary of state that targeted Turkey last week, Çavuşoğlu said: “One cannot reach anything with a language of threats.”

"The idea that a strategic, so-called strategic, partner of ours would actually be in line with one of our biggest strategic competitors in Russia is not acceptable," Antony Blinken told lawmakers on Jan. 20.

"I think we need to take a look to see the impact that the existing sanctions have had and then determine whether (there is) more that needs to be done," Blinken said during his Senate Foreign Relations Committee confirmation hearing.

Reminding that the U.S. has threatened Turkey previously, Çavuşoğlu elaborated that Ankara had to buy the Russian S-400 defense system since it needed to feel under protection. “They have to approach us with concrete proposals as well as guarantees,” he added.

Last month, the U.S. imposed sanctions on Turkey's Presidency of Defense Industries (SSB), its chief Ismail Demir and three other officials to penalize Turkey for its purchase of the Russian S-400s. The sanctions through the Countering America's Adversaries Through Sanctions Act (CAATSA) – designed to deter any country from agreeing to military deals with Russia – also restricts U.S. loans and credit to the SSB, although that is not seen as having a significant impact.

Washington says the S-400s pose a threat to its F-35 fighter jets and NATO's broader defense systems while Turkey has stressed that the weapons would not be integrated into NATO systems, posing no threat to the alliance or its armaments.

Çavuşoğlu explained that in the case where countries will not be able to purchase defense industry products from Turkey, they will turn to other countries, including China, which would again anger the U.S.

He gave the example that Pakistan currently wishes to buy ATAK helicopters and has been waiting for quite some time but that the motor for the helicopter is imported from the U.S. “If Pakistan will not be able to buy it from Turkey, it will buy it from another country,” Çavuşoğlu said, indicating that this country might not be a NATO ally country.

As a new U.S. administration is in office, Çavuşoğlu highlighted that Turkey’s main agenda with Washington will focus on the ending of U.S. support for the PKK’s Syrian wing, the YPG terrorist organization, while Washington will likely focus on the S-400 dispute. Other issues on the bilateral agenda will include the increase of trade volume, the F-35 issue as well as the threat of the Gülenist Terror Group (FETÖ), which engaged in a failed coup attempt against the Turkish state in 2016.

On the other side, another significant issue part of Turkey-EU, as well as Turkey-U.S. ties is the almost decade-long Syrian civil war that caused the death of thousands while displacing an even greater number.

A new round of discussions for revising Syria’s constitution will start in Geneva on Jan. 25, the United Nation’s special envoy for the country said Wednesday, as he urged all parties to take steps to start writing the draft.

The United States and several Western allies have accused Syrian regime head Bashar Assad of deliberately delaying the drafting of a new constitution to waste time until presidential elections this year and avoid U.N.-supervised voting as called for by the Security Council.

“We are more hopeful regarding these discussions,” Çavuşoğlu said on the issue, “For the first time, the constitutional committee will discuss the content of the Syrian constitution.”