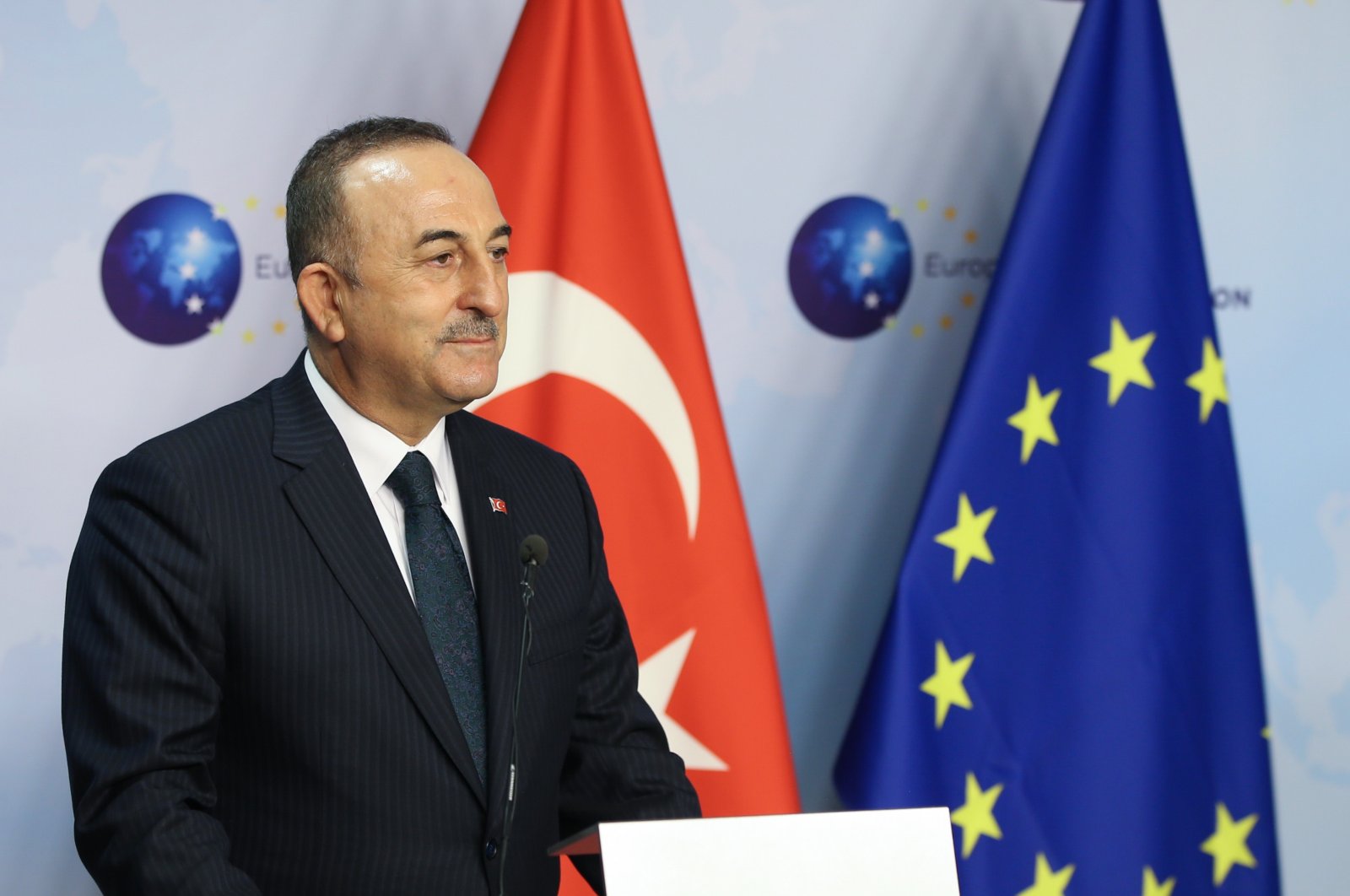 Foreign Minister Mevlüt Çavuşoğlu has embarked on a historic visit and busy schedule in Brussels to consolidate Turkey-European Union ties after a rough patch in 2020 by visiting officials from all main EU bodies, including the commission, council and parliament as well as NATO’s secretary-general.

During his three-day visit that started Wednesday, Turkey’s top diplomat met with EU parliamentarians, the bloc’s foreign policy chief Josep Borrell and European Council President Charles Michel. Though a meeting was not scheduled with European Commission President Ursula von der Leyen, she participated in Çavuşoğlu’s meeting with Vice President Margaritis Schinas, which was read by diplomatic circles as a reciprocal move by the bloc and a will to redress ties with Ankara.

“The European Union has a strategic interest in the development of a cooperative and reciprocally beneficial relationship, anchored in values and principles. The meeting between J. Borrell and M. Çavuşoğlu permitted a cordial, frank and thorough exchange of views in order to advance in this direction,” the EU said in a written statement late Thursday following a meeting that took more than three hours, which was also perceived as a positive signal.

EU officials and Turkey were able to set a positive agenda for the year 2021 and mutually address concerns as well as expectations for the future. However, Ankara still believes that a positive atmosphere on its own will not be enough and wants to see concrete actions and the fulfillment of previous promises.

Relations in 2020 were beset by developments in the Eastern Mediterranean, which became largely a field of dispute over drilling rights and maritime borders.

Turkey and EU member Greece have been at odds on several issues. Turkey, which has the longest continental coastline in the Eastern Mediterranean, has rejected maritime boundary claims made by Greece and the Greek Cypriot administration, stressing that these excessive claims violate the sovereign rights of both Turkey and the Turkish Republic of Northern Cyprus (TRNC). Instead of opting to solve problems with Ankara through dialogue, Athens has, on several occasions, refused to sit at the negotiation table and opted to rally Brussels to take a tougher stance against Turkey.

During a meeting in Brussels on Dec. 10, EU leaders decided to draw up a list of Turkish targets to sanction.

Turkish diplomatic sources stated that during the busy diplomatic meetings in Brussels, EU officials were told to urge Greece to take a more constructive approach favoring dialogue and negotiation to solve all its issues with Ankara.

In order to solve the dispute in favor of all countries, Turkey last year proposed to hold a conference with the participation of each Mediterranean nation, including the Turkish Cypriots; yet no concrete answer has been given by the EU regarding the proposal.

Yet, the Eastern Mediterranean dispute has not been the sole obstacle for furthering ties between Ankara and Brussels. The migration issue and Turkey’s candidacy for full EU membership are other bilateral issues that have been shelved for years.

Ankara now in 2021 also wants to advance in accession talks that have been frozen for years especially due to the failed coup attempt by the Gülenist Terror Group (FETÖ) in 2016, which forced Turkey to adopt security-based policies. In this regard, Turkey has recently reiterated that it is part of the bloc and sees its future in the EU, while it will continue efforts toward full EU membership. Diplomatic officials are now working on a road map to take steps toward membership and focus on reforms that will include the areas of the rule of law, freedoms and rights as well as the economy, which are expected to realign the interests of Ankara and Brussels.

With this aim, Çavuşoğlu also met with Oliver Varhelyi, EU commissioner for neighborhood and enlargement, on Thursday.

“Good discussion on EU-Turkey relations with Foreign Minister Mevlüt Çavuşoğlu today. I hope we are turning the page in our relationship and will cooperate together on issues of strategic interest in a constructive and mutually beneficial way,” Varhelyi wrote on Twitter.

"Should further strengthen unity and solidarity within the Alliance," Çavuşoğlu said in a Twitter post after the meeting.

"Turkey assumes critical and leading roles in ensuring the Alliance's deterrence and defense. Will continue to support NATO Missions in Afghanistan and Iraq," he added.

Should further strengthen unity and solidarity within the Alliance.

Turkey assumes critical and leading roles in ensuring the Alliance's deterrence and defense.

Will continue to support @NATO Missions in Afghanistan and Iraq.@jensstoltenberg pic.twitter.com/z01V84rJQ8