Turkey pushed away from EU by some members: Deputy FM Kaymakcı 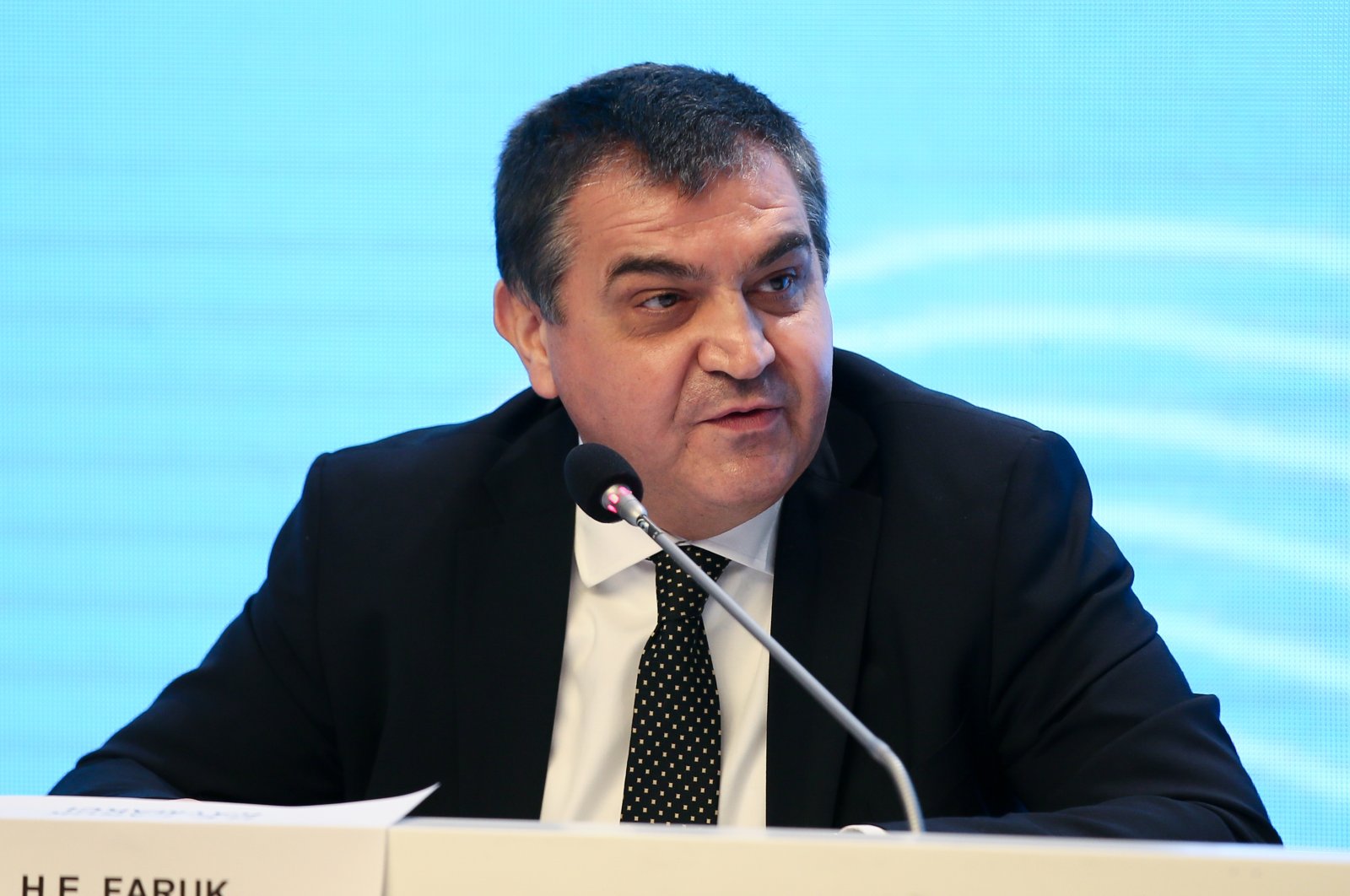 Turkey is not moving away but is being pushed by some European Union countries, Deputy Foreign Minister Faruk Kaymakcı said on Monday, reiterating that the country wants to be evaluated as a candidate state.

The 40th Turkey-EU Joint Consultative Committee started on Monday in western Turkey’s Izmir and will last until Tuesday. Significant positive transformations are taking place in the EU candidacy process, Kaymakcı said in the opening statement of the committee meeting.

“A positive agenda is something that needs to be worked on. Full membership is an important perspective. We know this won't happen tomorrow. If Turkey is expected to proceed on a reformist path and is expected to act within the Copenhagen criteria, stopping the full membership process is a source of demotivation. Turkey is not actually going away, where it used to be, but Turkey is being pushed away due to the actions of some member states," he said.

"We definitely want Turkey to be evaluated from the perspective of membership. However, you know that the Customs Union needs to be updated. There are asymmetries in today's practices and there are trade-offs. But it is important for the continuation of the positive agenda between the EU and Turkey. It is important to hold high-level meetings. Unfortunately, putting our membership process on hold, especially for political reasons, was a practice that lowered our motivation,” Kaymakcı added, emphasizing hope to continue the positive agenda with the EU.

Both the EU and Turkey have voiced their intentions to set a positive agenda, yet further efforts and actions are needed. Turkey has reiterated that it is part of Europe and sees its future in the EU, adding that it will continue to work toward full membership. Turkish officials have also said that they hope for progress in 2021 and expect the bloc to take definitive action to this end. European Union leaders earlier this year said the bloc is ready to support a concrete and positive agenda with Turkey, especially in the areas of economic cooperation and migration, after President Recep Tayyip Erdoğan received the head of the European Council, Charles Michel, and the head of the European Commission, Ursula von der Leyen, in Ankara to discuss bilateral ties and seek a way forward after tensions rose high last year.

Turkey has long pushed for an update to the 25-year-old deal, saying that doing so would benefit both the EU and Turkey. Turkey is the only non-EU country with a customs union agreement with the bloc. The deal was struck in 1995. In its Dec. 21, 2016 assessment, the European Commission proposed revamping the deal. The current Customs Union only covers a limited range of industrial products and excludes agriculture, public procurement, e-commerce and services. Expanding the Customs Union would bring Turkey, an EU candidate for membership of the bloc, fully into the internal market of the world’s largest trading bloc, allowing almost all goods and services to flow unhindered.

PKK and the issue of terrorism are important for Turkey, Kaymakcı also said, adding that: “It is important for us that the PKK is included in the EU's terrorist organization list, but it is not enough. The same thing should be applied not only to PKK but also to terrorist organizations such as FETÖ (Gülenist Terror Group). We need to work together on Daesh, Al-Qaeda and radicalization."

Expressing that the issue of migration is also an important cooperation area, Kaymakcı said that the relationship between the EU and Turkey cannot be reduced to the issue of migration and money. Underlining that the money was given to Syrians in Turkey, not Turkey, Kaymakcı said: "The new migration agreement requires cooperation in the northern Syria region, and within the framework of human rights, cooperation is also required to ensure that Syrian migrants return to northern Syria in accordance with humanitarian conditions."

Turkey and the EU in March 2016 signed a refugee deal that aimed to discourage irregular migration through the Aegean Sea by taking stricter measures against human traffickers and improving the conditions of nearly 4 million Syrian refugees in Turkey. Turkey has said falling numbers of migrant crossings show it upheld its part of the deal, but the EU failed to keep its half, including visa liberalization and financial aid for refugees. President Erdoğan had criticized the EU for failing to fulfill its pledge to provide funding for migrants and refugees in Turkey as part of the pact while allocating billions of euros to Greece. Turkey is hosting nearly 5 million migrants, with nearly 4 million from Syria, its migration authority says. That's 2 million more than in 2016, a heavy burden on a country that only had 60,000 asylum-seekers in 2011 before Syria's civil war broke out.

The EU-Turkey Joint Consultative Committee (JCC) was established in 1995 and its mandate comes from the EU-Turkey Association Agreement. It is composed of members from the EESC and members representing civil society organizations (social partners and other civil society organizations) in Turkey. The main purpose of the JCC is to monitor Turkey's path towards the EU, and to adopt recommendations for the attention of Turkey's government and the EU institutions. The role of the JCC is also to enable representatives of Turkish civil society organizations to become acquainted with the consultation process in the EU, as well as allow EU representatives to familiarise themselves with the social structures and the economic and social impact of the reforms in Turkey. The JCC discusses a wide range of topics, including cooperation between Turkey and the EU in different areas such as migration, energy, small and medium-sized enterprises and vocational training. Recent topics of JCC meetings have included the enhancement and modernization of the EU-Turkey customs union, regional disparities in Turkey, the integration of people with disabilities in society, and women and employment, as well as trade union rights.

Turkey has the longest history with the union and the longest negotiation process. The country signed an association agreement with the EU's predecessor European Economic Community (EEC) in 1964, which is usually regarded as a first step to eventually becoming a candidate. Applying for official candidacy in 1987, Turkey had to wait until 1999 to be granted the status of a candidate country. For the start of the negotiations, however, Turkey had to wait for another six years, until 2005, a uniquely long process compared with other candidates.