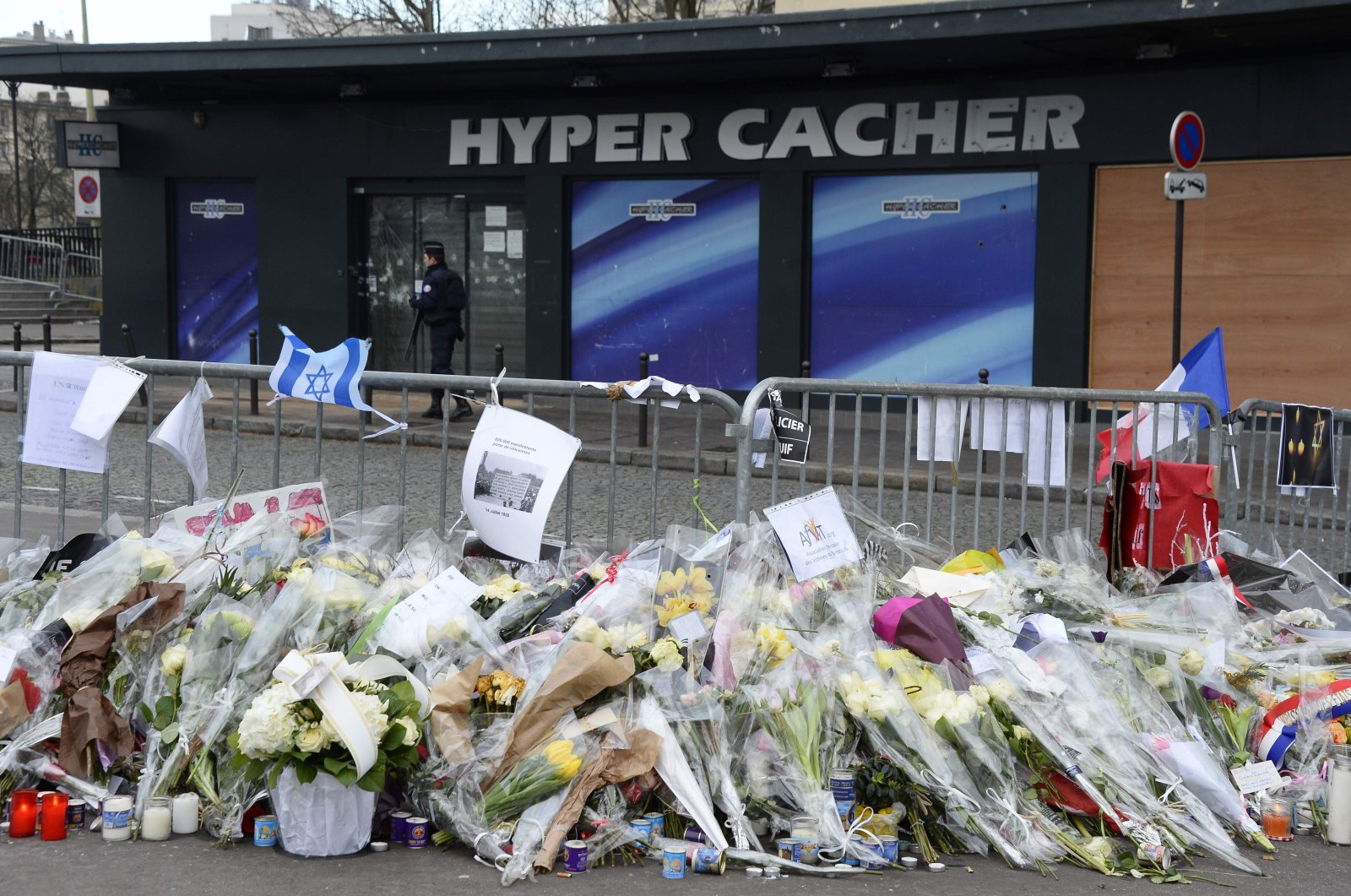 In this file photo taken on Jan. 16, 2015 shows flowers placed in tribute to the victims of the attack by Amedy Coulibaly at a supermarket in eastern Paris, France. (AFP Photo)
by Daily Sabah with AFP May 21, 2020 11:47 am
RECOMMENDED

They included Hayat Boumedienne, the wanted partner of Amedy Coulibaly, who was one of the perpetrators of the January 2015 terrorist attacks in France, the Center for the Analysis of Terrorism (CAT) told Agence France-Presse (AFP).

The 13, who were mainly held in the Al-Hol and Ain-Issa camps, accounted for about a tenth of all French Daesh militant women held in Syria, said Jean-Charles Brisard, one of the co-founders of CAT.

He told AFP the women's escape showed the "inability" of local authorities to guarantee the detention of foreign terrorists.

"The main risk is that the jihadists will disperse and either reinforce jihadist organizations in Syria or Iraq, try to wage jihad somewhere else, or, in some cases, return clandestinely to Europe to commit attacks," he added.

Brisard said there were other prominent figures among the 13 women.

"Some were married to well-known jihadists, others made propaganda and appeared in the magazines of the Islamic State group," referring to the Daesh terror group.

Amedy Coulibaly in January 2015 opened fire at a supermarket in eastern Paris, killing four people, a day after he killed a young policewoman in Paris.

He was killed by security forces.

The supermarket siege came two days after the massacre at the offices of the Charlie Hebdo satirical weekly, where 12 people were killed.

Hayat Boumedienne was the center of international attention in 2015 after it emerged that just before the attacks she had entered Turkey at an Istanbul airport and passed by land into Syria.

She is one of several people due to be tried in absentia starting in September in a trial in Paris dealing with the January 2015 attacks.

Previously, YPG/PKK terrorists had also set free hundreds of Daesh members or turned a blind eye to their escape.

The YPG/PKK terrorist organization had released more than one thousand Daesh terrorists and family members from the al-Hol camp in Hasakah.

The camp is a holding place for civilians who escaped the conflict in Deir el-Zour, along with the families of former Daesh members who surrendered and captured terrorists. Most of the civilians were forcefully brought to the camp by the YPG/PKK in April 2017, according to reports.

Some Arabs, who form a majority of the inhabitants of the areas under the control of YPG/PKK militia, accuse the terrorist group of discrimination, an allegation rejected by the group’s officials.

With crucial U.S. air and ground support, the YPG/PKK terrorists declared a military victory against Daesh last year after seizing control of the last sliver of land the militants controlled in southeast Syria. The Daesh terror group has resorted to guerrilla attacks since losing its last significant piece of territory in Syria last year.

Since the beginning, Turkey has opposed its NATO ally U.S.’ partnership with the YPG/PKK in the fight against the Daesh in Syria, defending the argument that it is nonsense to support a terrorist group to defeat another one.

The PKK, which is listed as a terrorist organization by Turkey, the U.S. and the EU, has waged a terror campaign against Turkey for more than 35 years and has been responsible for the deaths of nearly 40,000 people, including women and children. The YPG is the Syrian offshoot of the PKK terror group.