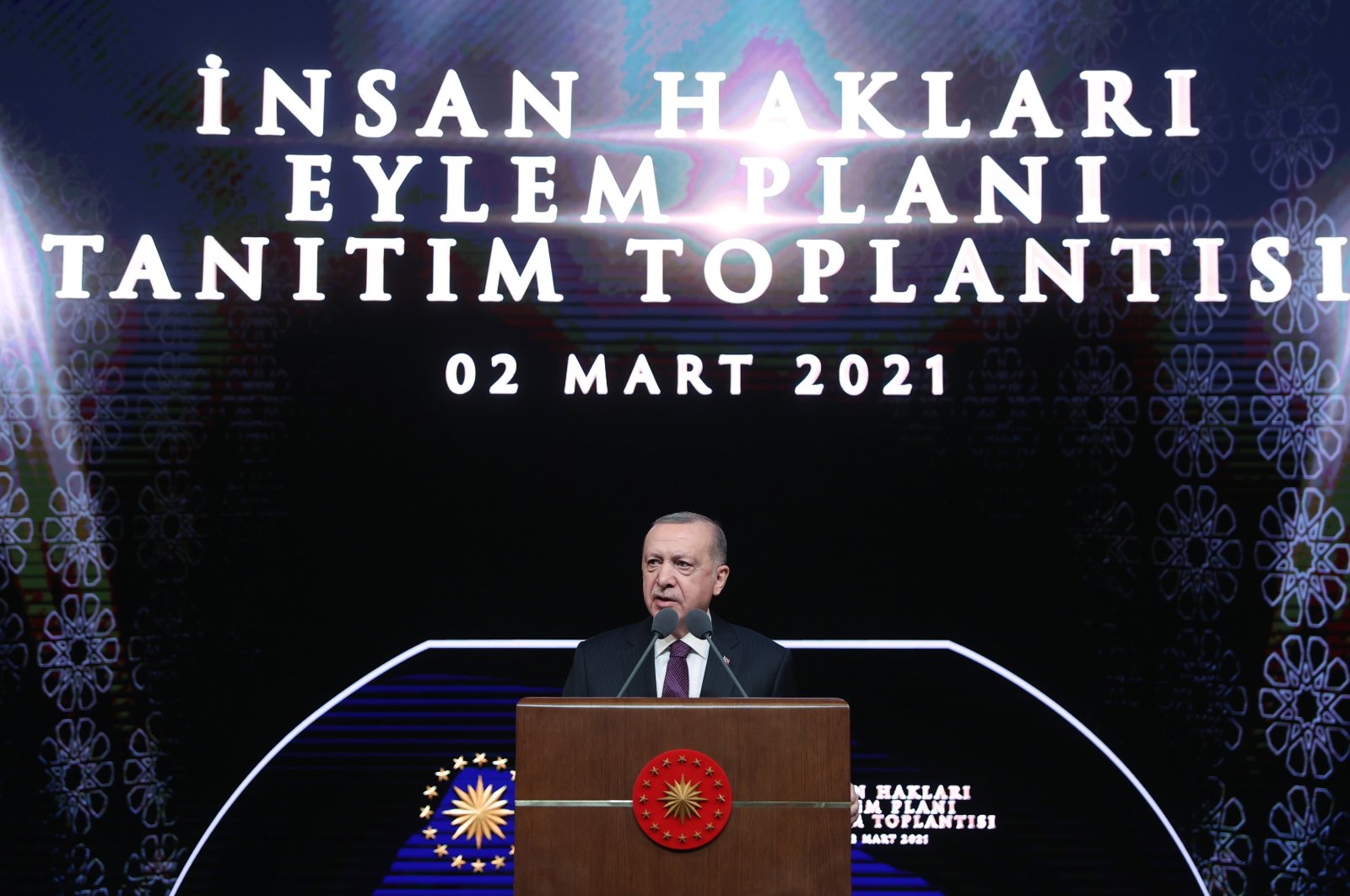 President Recep Tayyip Erdoğan on Tuesday unveiled Turkey's long-awaited Human Rights Action Plan, saying that the plan is expected to be executed within the upcoming two years and that "broad-based consultations were a part of every activity in the plan prepared according to our nation's expectations."

"It has 11 principles, the first one of which is the fact that human rights are under the protection of the law," he stated, speaking at the introductory meeting of the Human Rights Action Plan.

Around the 11 main principles that constitute the backbone of the plan, a total of nine aims, 50 goals and 393 activities are set herein. The activities envisioned within the framework of each goal under the relevant aims are organized as tangible “measurable and monitorable” actions.

"The ultimate aim of Turkey's action plan is a new civilian constitution," the president highlighted.

On May 30, 2019, Erdoğan announced a new judicial reform to strengthen the independent, objective, accountable and transparent features of the judiciary. The judicial reform strategy consists of two basic perspectives, nine targets, 63 objectives and 256 activities.

The nine aims of the plan are a stronger system for the protection of human rights; strengthening judicial independence and the right to a fair trial; legal foreseeability and transparency; protection and promotion of the freedoms of expression, association and religion; strengthening personal liberty and security; safeguarding physical and moral integrity and the private life of the individual; more effective protection of the right to property; protecting vulnerable groups and strengthening social wealth, and last but not least, high-level administrative and social awareness on human rights.

Mentioning these principles and aims in detail, Erdoğan underlined that the new plan aims to boost the effectiveness of the system of individual applications to the top Constitutional Court, while comprehensive work has begun to make amendments to the legislation on elections and political parties to strengthen democratic participation.

He stated that the Human Rights Compensation Commission will cover financial damages of long trials without the need to apply to the Constitutional Court.

“We are reviewing the legislation and enforcement with the aim of guaranteeing broadly the freedom of expression as well as the rights to meeting and demonstration marches,” Erdoğan stated.

Within the scope of the plan, Turkey will also establish an investment ombudsman's office to settle disputes between administration and investors.

With an aim to "boost" the standards of freedom of expression and the press, Turkey is also developing measures to facilitate the professional activities of journalists as a part of the plan.

The plan also enables public- and private-sector staff and students to take time off for religious holidays they observe regardless of their faith.

The president underscored that public and private employees and students of all religions will be granted a leave of absence on their own religious holidays.

Erdoğan also pointed out that Turkey is accelerating efforts on the visa liberation process with the European Union.

Turkey's first application to the European Union was made back in 1963. The visa liberalization process for Turkish citizens has been a major point and gained even more momentum in 2018 when Ankara set out to fulfill the 72 criteria being levied on them. So far, an overwhelming majority of these criteria have been achieved. Still, there are six criteria to be fulfilled soon. The desire to be a member of the EU has always been a motivating factor in Turkey's reform journey.