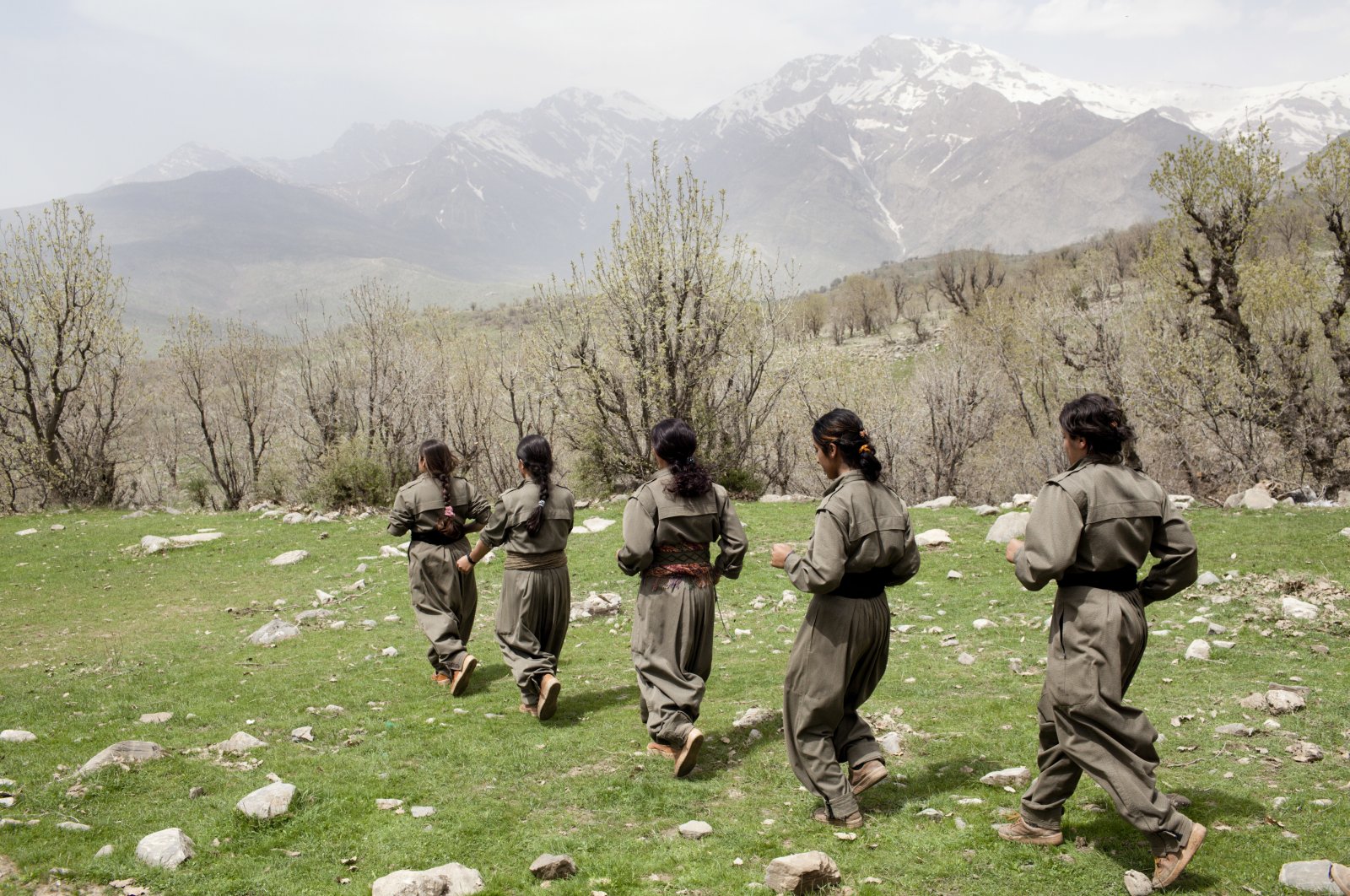 The Pro-PKK Peoples' Democratic Party (HDP) organizations lay the groundwork for women to join the terrorist organization, a report said, stressing that while the PKK claims to “liberalize” women, it in fact ignores and even endangers their freedoms and security.

The report titled "PKK Terror and Women," published on International Women's Day by the ruling Justice and Development Party (AK Party) Kahramanmaraş deputy, Habibe Öçal, put forth how the terrorist organization makes the life of women in its ranks miserable.

Highlighting that the PKK has always presented itself as liberal, claiming to fight for freedom and defend women's rights, Öçal wrote: “The PKK has made people suffer amid its massacres. It has made both women that joined the organization and mothers of abducted daughters' lives miserable.” She elaborated that many women that join the PKK as militants, flee the organization at the first opportunity and describe the experience as a nightmare.

“While the PKK speaks of liberalization and salvation, those that left the organization reveal the hegemony imposed by the leadership and the despotic regime inside,” the report added, underlining that many have said they were abused, humiliated and sexually assaulted.

“The terrorist organization has seen family and familial values, which are the foundation of a society, as remnants of the feudal order and has rejected these while taking away children from their families,” Öçal told Daily Sabah. She explained that she has spoken to multiple female former PKK members and to the families, who are protesting the terrorist organization for over a year in front of the HDP’s headquarters in the southeastern province of Diyarbakır.

“The HDP is acting as the recruiter for the PKK. Many of the former female terrorists were deceived after having entered the HDP youth center with several promises and presentable young men,” she added.

“Similar to the PKK, the discourse on women is at the center of the HDP’s statement,” she said, but added statements from former members prove to the contrary and claimed women were not uplifted but abused in many ways.

Speaking about the abuse women face within the PKK ranks, Öçal shared the experience of a female former terrorist. She told Öçal that women within the organization are given the heaviest duties in the mountains, particularly when they are on their period, forcing them to work in intolerable conditions.

“The PKK leadership tries to separate them from their female identity and degenderize them. Hailing women's rights on one side, it abuses female members’ bodies, even that of minors,” she continued.

“Their target is children who live under difficult sociological conditions where the familial authority is weak. These include families, where the mother or father has died, where parents are divorced or work in remote areas, that is to say those in disadvantaged groups living in hardship,” Öçal stated.

“None of these children went with their own will,” Öçal underlined, saying that they were too young to know better, noting that the organization recruits minors as young as 11. “The PKK does not target young women of the age of 18-20 but rather smaller ones, whom they can educate and turn into militants.”

Saying that those voicing their intent to leave the organization face an onslaught of propaganda, Öçal said one of the former members decided to leave the PKK when she saw her mother, one of the Diyarbakır families, on television by coincidence.

“The sit-in of the Diyarbakır families is highly influential,” Öçal underlined, saying that the protest accelerated the dissolution of the organization. “However, communication means and television is prohibited for members and just a luxury that so-called high-ranking terrorists can afford,” she explained.

A significant number of suspected terrorists have begun to flee the PKK and surrender but many terrorists lack the courage to leave the group out of fear of severe punishment if caught.

“The mothers’ protest has dealt the organization a heavier blow than security forces. It sped up the demoralization within the organization. We have to strengthen this civilian contribution,” Öçal said and highlighted that the goal of this report is to deter others from joining the terrorist group and bring back those deceived.

“Though participation from Turkey has substantially decreased in the past few years, the PKK’s Syrian wing, the YPG, continues to recruit minors from regions ravaged by civil war, including Syria,” Öçal pointed out, saying that many former members she has spoken to say they fought among the ranks of the YPG, one of whom was 13 years old when she was abducted.

“The West knows the inside of the PKK better than us yet use this as a political tool against Turkey. The issue of women must be above politics,” Öçal said. She underlined that western countries have been turning a blind eye to the abuse women face on a daily basis within the organization.

Last year, a U.S. lead inspector general’s report said the YPG had been recruiting child soldiers from displacement camps in northeastern Syria despite pledges to stop the practice.

The report, which quotes the annual report on "Trafficking in Persons" issued by the State Department, says that although in July 2019 the SDF, a rebranded version of the YPG terrorist group, adopted a U.N. Security Council Resolution-mandated action plan to end the use and recruitment of children for military training within their ranks, the group is still resorting to these practices.

“Even though the U.S. and European countries have listed the PKK as a terrorist organization, this has not reflected upon their implementations,” Öçal added.

The U.S. primarily partnered with the YPG in northeastern Syria in the anti-Daesh fight. While Turkey strongly opposed the terrorist group’s presence in northern Syria, which has been a major sticking point in strained Turkey-U.S. relations. Ankara has long objected to the U.S.' support for the YPG, a group that poses a threat to Turkey and terrorizes local people, destroying their homes and forcing them to flee.

The YPG's use of child soldiers has been repeatedly documented and criticized by international human rights organizations, including Amnesty International and Human Rights Watch (HRW).