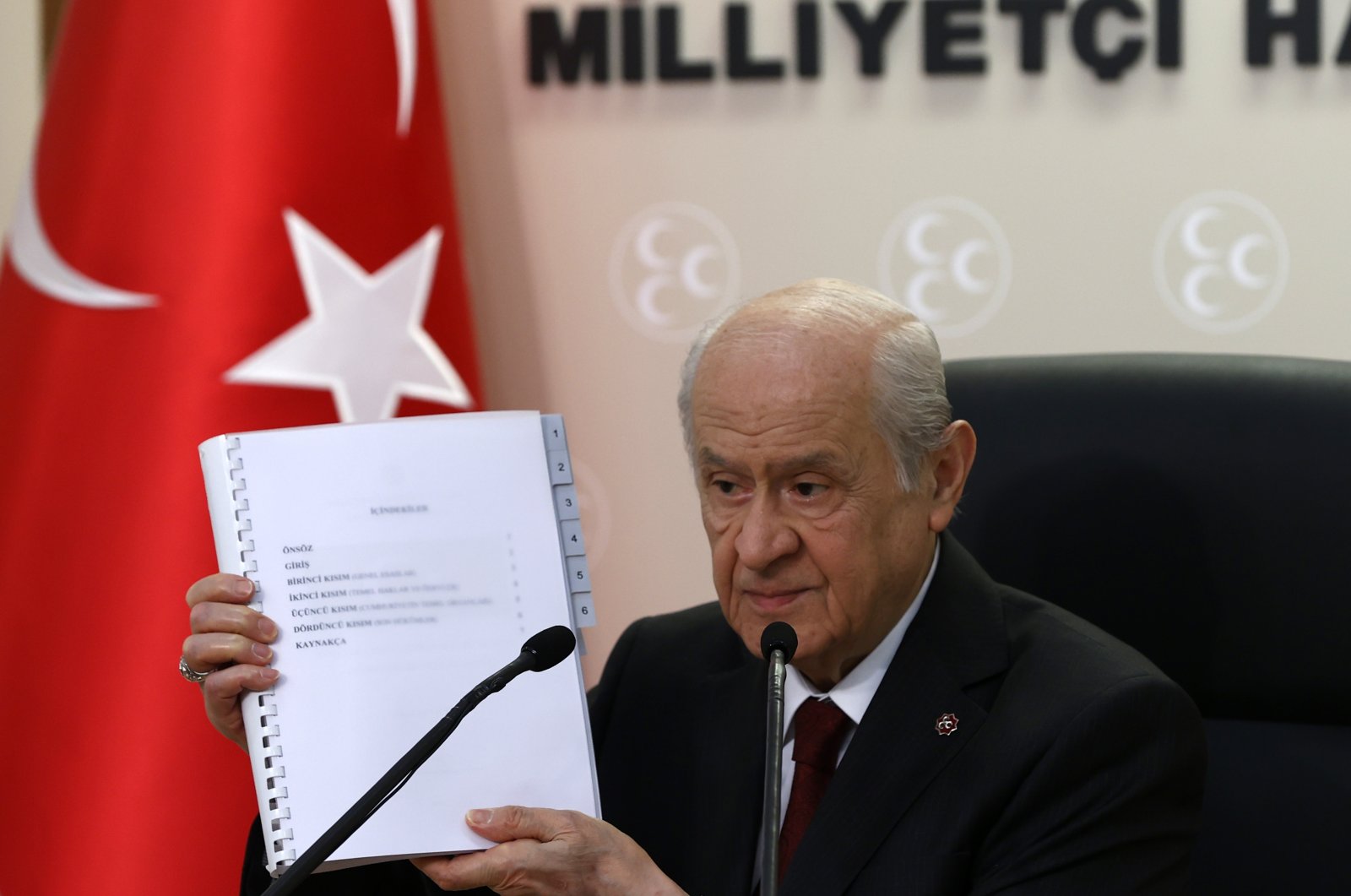 MHP Chairperson Devlet Bahçeli speaks to reporters about his party's constitution proposal at the MHP headquarters in Turkey's capital Ankara, May 4, 2021. (AA Photo)
by DAILY SABAH May 04, 2021 1:47 pm
RECOMMENDED

The Nationalist Movement Party (MHP) Chairperson Devlet Bahçeli said his party has completed a draft for Turkey's constitution and will soon share it with the ruling Justice and Development Party (AK Party).

Noting that the draft contains 100 articles, Bahçeli said the current atmosphere of conciliation makes it a necessity to draft a new constitution and his party is ready to contribute with no preconditions.

“We have completed the preliminary preparations for the ‘100-Article New Constitution’ on the centenary of the Republic,” Bahçeli said, adding that other parties should also outline the kind of constitution they would like to have in the country. He continued by saying that they will present their proposal to President Recep Tayyip Erdoğan and other parties soon.

The MHP’s proposal consists of four sections, 100 articles and has kept the irrevocable provisions as they are.

It allows the parliament speaker to act as a mediator during times of political crisis, while it also addresses obscurities regarding the lifting of parliamentary immunity.

Bahçeli noted that their proposal was drafted taking into consideration the constitutions of 164 countries, as well as the common values of Turkish society.

The fundamental rights and freedoms section of the draft was written taking into consideration human rights treaties Turkey is a signatory of, Bahçeli said, adding that they emphasize freedoms as the basis of the constitution and restrictions as being exceptions.

Parliament speaker to be mediator

The MHP’s draft envisions the parliament speaker as a figure who acts as an arbiter to ensure national conciliation and solve political crises, due to their impartial stance.

The parliament’s prerogatives on legislation, ratification and termination of treaties, approval of the budget and selecting members for constitutional institutions and launching parliamentary probes has been strengthened in the MHP’s proposal.

"Our constitution writing process is also about to be completed. Its details will be shared with the public at an appropriate time after the Bayram (Eid al-Fitr)," he said.

On Monday, reports said the AK Party has accelerated its efforts for a new constitution by seeking conciliation with every segment of society.

The president’s proposal came four years after the 2017 constitutional referendum asked voters to decide on an 18-article bill to switch from a parliamentary to a presidential system, among other changes. The amendments to the Constitution were jointly introduced by the AK Party and the MHP. Erdoğan was elected president under the new system in 2018.