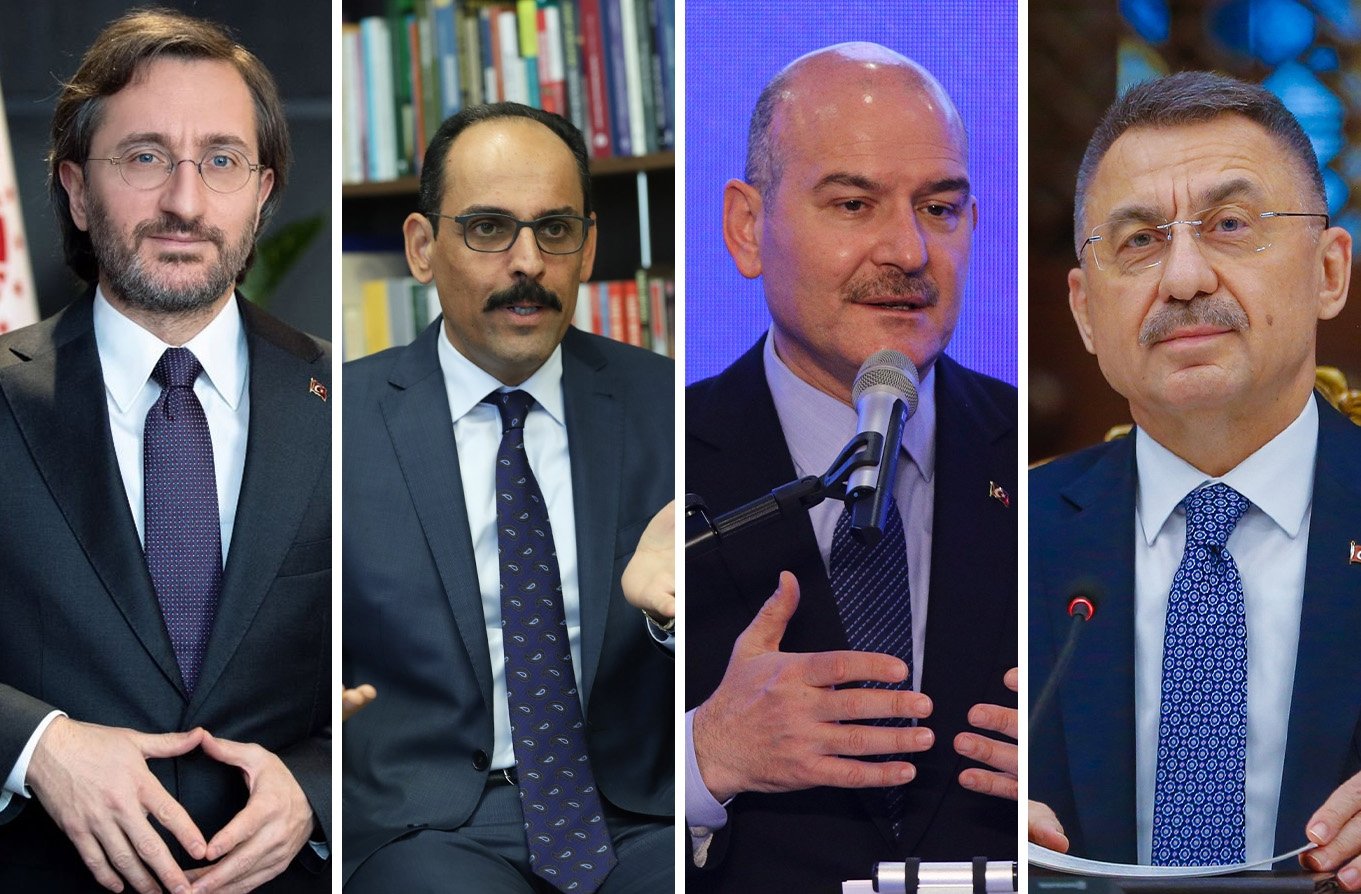 Turkish officials on Sunday strongly condemned a "declaration" signed by 104 retired navy admirals, which has drawn strong reaction from the government and the public saying it implies interference in democratic institutions and public will.

Vice President Fuat Oktay in a Twitter message called out the coup supporters who are unwilling to accept the will of the nation and targeted democratic institutions that were elected by the people and the Turkish Armed Forces (TSK). Noting President Recep Tayyip Erdoğan’s determined stance, he said that the necessary response will be clearly made.

"Not only those who signed but also those who encourage them will give an account before justice," he added.

Parliament Speaker Mustafa Şentop accused admirals, who were not seen during Turkey's fight against external enemies, of trying to systematically incite chaos.

"Our heroic nation did not bury only FETÖ coup plotters on July 15 to the ground, also buried all coup supporters who benefit from the same resource. Expressing an idea is different, preparing a statement implying a coup is different," he said.

“It is unacceptable for some retired admirals to release a statement that is reminiscent of ugly things that have happened in the past. It is obvious what this method and behavior refer to in our political past,” the ruling Justice and Development Party (AK Party) Spokesperson Ömer Çelik wrote.

“We condemn this primitive language aimed at people’s will,” he added.

Following the developments, the AK Party's central executive board (MYK) has decided to convene on Monday.

On the night of July 15, 2016, a small military junta, made up of Gülenist Terror Group (FETÖ) members, attempted to overthrow the democratically elected government and assassinate President Erdoğan, who was on holiday in the Marmaris district of southwestern Muğla province.

Coup plotters, who used heavy weaponry, including fighter jets, helicopters and tanks, against citizens that poured to the streets to protect the country's democracy, killed 251 people and wounded nearly 2,200.

The Turkish Defense Ministry also published a statement on Sunday, underlining that the declaration harmed democracy and demotivated the Turkish Armed Forces (TSK) "at a time when the TSK, at the leadership of our president, makes huge self-sacrifices to protect our interests, contribute to global peace and stability and protect the rights of our friends and brothers both within the country and abroad, in Syria, Iraq, Cyprus, Azerbaijan, Libya, the Eastern Mediterranean as well as many other geographies.

"Highlighting that the Defense Ministry is certain that the independent Turkish judiciary will do what is necessary, the ministry added in a written statement that the TSK's growing strength is clearly demonstrated through the successful operations it conducts.

"The Turkish Armed Forces cannot be made a tool for the ambitions and personal goals of people that have no duty or responsibility," it added.

Ministers echoed top AK Party officials' condemnations of the declaration, with nearly every single minister in the Cabinet criticizing the admirals and their joint statement.

Justice Minister Abdulhamit Gül called declarations like the one released on Sunday a thing of the past and emphasized that Turkey is a country that draws its strength from the "people's will," who he said will hold the generals accountable for their actions. He also blamed the admirals for trying to incite a coup.

“The uncalled declaration, which is based on delusions, by those who have forgotten the value of the title they have carried in the past is an insult to democracy, law, our government and our people,” Soylu wrote in a statement on Twitter.

Education Minister Ziya Selçuk called the statement a “shame” for democracy, adding that national will is of the highest importance.

Environment and Urbanization Minister Murat Kurum said the retired admirals have crossed the line with their statement.

“You keep failing to learn but we don’t live in the old Turkey anymore. No one has the right to release declarations on midnight that questions or challenges our people’s will,” Kurum wrote.

Family, Labor and Social Services Minister Zehra Zümrüt Selçuk said no one should see themselves above the will of the Turkish people.

The Nationalist Movement Party (MHP) leader, Devlet Bahçeli, on Sunday strongly condemned the "anti-democratic and threatening declaration" signed by 104 retired navy admirals, calling for them to be stripped of their titles.

Great Unity Party (BBP) Chairperson Mustafa Destici called the declaration an unacceptable example of a junta initiative and said that certain retired admirals released the statement to subtly incite a coup while using the Montreaux Convention as an excuse.

The Montreux Convention Regarding the Regime of the Straits is a 1936 agreement that gives Turkey control over the Bosporus and Dardanelles and regulates the transit of naval warships. The convention guarantees the free passage of civilian vessels in times of peace and restricts the passage of naval ships that do not belong to littoral Black Sea states. Signed on July 20, 1936, at the Montreux Palace in Switzerland, the convention gave Turkey permission to remilitarize the Bosporus and Dardanelles. It went into effect on Nov. 9, 1936, and was registered in the League of Nations Treaty Series on Dec. 11, 1936.