Everyone is confused in Syria except Turkey 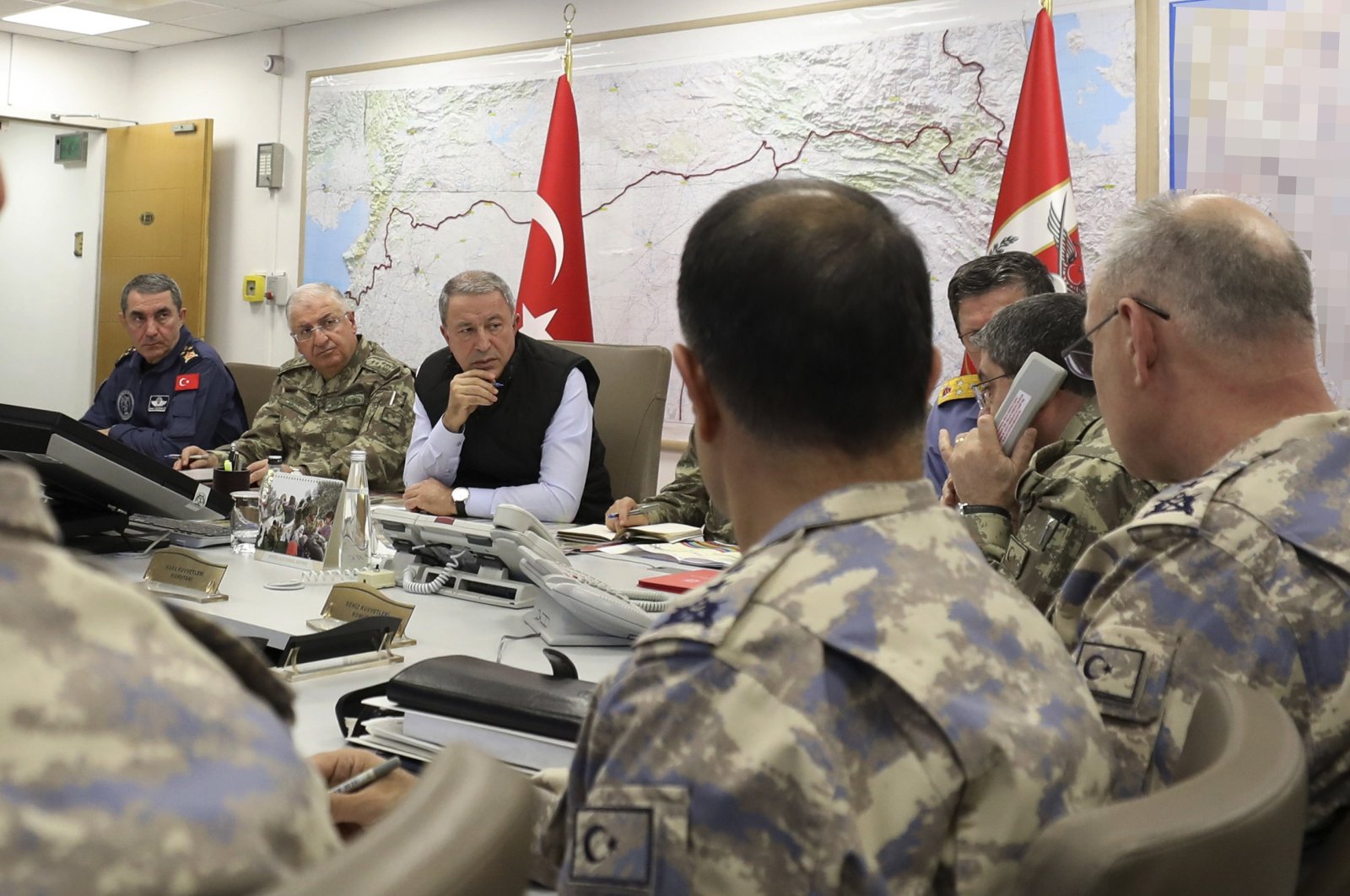 Earlier in the week, there were unconfirmed reports from the Russian media claiming that American troops had withdrawn from the Qamishli region of northeastern Syria and were being shifted to Iraq.

Disinformation has also started to increase, especially with the apparent likelihood of a new Turkish operation against the PKK terrorist group's Syrian branch YPG elements in northern Syria. The reason for this is that there are assessments on the field that are dominated by uncertainty about how Russia will take a stand against this potential move by Turkey in the first place.

The terrorist group PKK's leadership in Qandil restricted the authority of the notorious ringleader of its Syrian wing, Şahin, over a leadership dispute, Habertürk daily reported last week. Şahin, also known as Mazloum Kobani or Şahin Cilo, is currently on Turkey's most-wanted list for orchestrating terrorist attacks in Turkey.

The report said that PKK leaders took the decision a year ago, as they were concerned about Şahin's "fame" and purported international relations network. It added that the decision came as a shock for the YPG – Şahin had to hold a meeting with U.S. officers to discuss the issue.

Speaking to Al-Monitor later in the week, Şahin's claims also reveal how confused all the actors in the field are, especially the terrorist organization itself, the U.S., Russia and the Assad regime. Şahin claims that the U.S. has promised them autonomy in northern Syria, and Russia claims that it is against a possible Turkish operation. While it would seem an optimistic prospect that there will be clear answers to these claims from Washington and Moscow, Turkey stands decisively as the power that knows what to do amid all this confusion.

Ankara has long been clear that the terrorist organization PKK/YPG is now being used as a tool by Russia and the U.S., and it knows that both countries are extending a lifeline to the PKK/YPG under the pretext of fighting Daesh.

So much so that the ringleader also claims that Washington and Moscow gave guarantees that they will defend it against a possible operation by Ankara.

At this point, it is also worth recalling here exactly under what military and diplomatic terms and conditions Turkey's previous four operations were carried out.

Turkey has reported all its operations against the terrorist organization's attacks on it from Syria and across the border within the necessary engagements with Moscow and Washington, but has never waited for their approval or green light for this. All operations, namely Euphrates Shield in 2016, Olive Branch in 2018 and Peace Spring in 2019 were all operations undertaken against a threat to Turkey's national security. Now, just like then, Turkey is warning both Russia and the U.S. to "not forget your guarantor guarantees" before a possible new operation.

This is because, especially recently, Russia has not fulfilled its promises to control the YPG/PKK in Syria, and the terrorist organization has carried out various attacks on safe zones created by the Syrian National Army (SNA) with the support of Turkey.

On the other hand, the YPG/PKK, which has occupied about a third of the Syrian territory over the past six years with the support of the U.S., has been increasingly targeting Azaz, Marea, Al-Bab, Jarablus, Afrin, Tal Abyad and Ras al-Ain in the north of the country with heavy weapons.

According to Anadolu Agency (AA), terrorists use tow missiles, multi-barrel rocket launchers and advanced heavy weapons such as Katyusha and Grad missiles, as well as U.S. and Russian-made rocket launchers and mortars in their attacks. In particular, the Tal Rifaat district of Aleppo, located just 18 kilometers (11 miles) from the Turkish border, was captured by the PKK/YPG with Russian air support in February 2016 at the center of these attacks. The terrorist organization has also displaced about 250,000 civilians who have since taken refuge in areas close to the Turkish border in Tal Rifaat. After Tal Rifaat, the most attacked area is the Manbij district of Aleppo, located 30 kilometers (18.6 miles) from the Turkish border, and the Ain al-Arab, a district on the border.

AA correspondents also reported from the field that the PKK/YPG is threatening the security of the districts of Tal Abyad and Ras al-Ain, which are located in the Operation Peace Spring area on the Syrian-Turkish border. The terrorist organization is also firing mortars and heat-seeking missiles at some villages into the countryside of Ras al-Ain. In addition to carrying out car bomb attacks in civilian settlements, the YPG/PKK feeds the conflict environment by occasionally making attempts to infiltrate the positions of the SNA on the front line.

On the other hand, regardless of where Moscow and Washington have come from in terms of Syria policy, they have almost made a verbal agreement on the claim that "Daesh is the biggest enemy that needs to be defeated in Syria." In addition, it is known that Russia and the regime have conveyed the message to the PKK/YPG that they would not want another parallel state and army structure in Syria, in contrast to the U.S. stance, which does not have much concern for the territorial integrity of the country.

As another noteworthy development, some Arab countries, especially the United Arab Emirates (UAE), have also joined the U.S. and Russia in agreeing on the continuation of the Assad regime. This step was demonstrated over the past few days when the UAE foreign minister met with Assad in Damascus. In the face of this situation, perhaps the only issue that Iran and Israel have agreed on is that Assad should remain in power under these circumstances. But the main question at this point is where these countries will be in sharing power in Syria.

In the face of this sharing, Russia's ultimate goal is to empower its military and political domination in Syria, where it has invested more than half a century. It would also be naive to assume that the U.S. interest in the country consists only in showing its presence through a terrorist organization or trying to gain victory by burying Daesh in Syria.

Furthermore, it is also unrealistic to think that the engagement of both Washington and Moscow with the PKK/YPG is ultimately serving in their direct interests and will be maintained forever. Thus, it would be interesting to see how much more these countries will invest knowing that it will not be possible for an armed terrorist organization to establish an autonomous administration inside Syria, especially considering that Turkey will not allow it under any circumstances.

In fact, it is not a very secret matter that Turkey plans to eventually and completely eliminate this terrorist corridor and is not seeking any permission from its interlocutors, just like in the past.

Lately, the ringleaders of the terrorist organization are sending messages directed at the internal politics of Turkey and constantly mention the guarantees they have received from Moscow and Washington through the media. In this way, the organization is trying to consolidate and keep together the different factions within itself.

Meanwhile, another noteworthy statement has just come from Washington this week. Responding to a question from AA on Wednesday, U.S. Department of Defense Spokesperson John Kirby said that he had not seen the allegations of PKK/YPG ringleader Şahin that the U.S. had given them guarantees and added, "I know you are tired of me expressing this, but it is important to say it anyway. Our partnership with the SDF in Syria is based on only one thing and it is the fight against Daesh," using an alternative acronym for YPG.

It is clear that every actor on the field in Syria is either confused or sending a lot of contradictory messages between rhetoric and action. Despite all this, it continues to be true that Turkey is the most clear-headed and level-handed side in this regard. In the face of this clarity, however, it does not seem sustainable for Ankara to act by ignoring these facts and contradictions between the confused partners' promises and what they are actually doing on the ground.