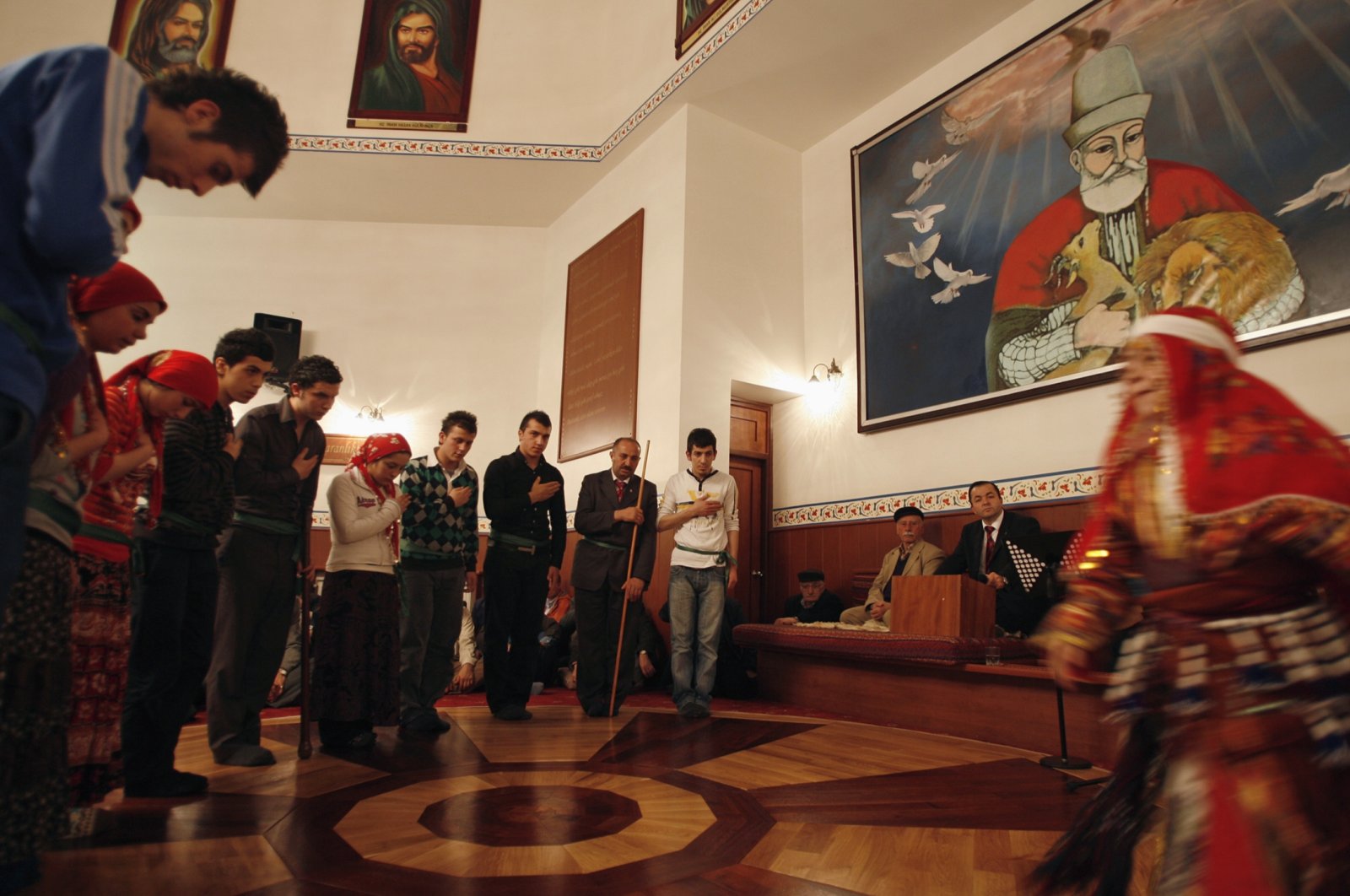 The ruling AK Party government has been taking action to discuss problems faced by the Alevi community, who have high expectations and some of whom remain hopeful about finding solutions to their concerns

A mixture of emotions surrounds the issues faced by Turkey's Alevi community, as there are high hopes that the new year may usher in new developments for them – as recent reports and sources indicate the government has been seeking to find permanent solutions – but some Alevis highlight obstacles and the importance of a genuine understanding in terms of any new regulations to meet their expectations.

Alevis, who make up the second-largest religious community in the country with approximately 20 million followers, have a list of concerns about various issues, including the public recognition of their identity, the legal status of cemevis – their houses of worship – and funding, as well as the prerogative for Alevi students to be excluded from compulsory religion classes in elementary and high schools.

The ruling Justice and Development Party (AK Party), hailed as the pioneer of ground-breaking reforms for the country’s religious and ethnic minorities, had taken steps before to address the issue, but no concrete solutions have been reached until now. But in recent months, officials have been making positive statements and have been expressing their intentions to solve the issue once and for all.

The cemevis are currently regarded as foundations under Turkey’s interior and culture and tourism ministries, rather than recognized as houses of worship, which would legally entitle them to receive state funding like mosques, churches and synagogues of recognized religious minorities in the country. Some 80% to 90% of all cemevis in the country were built during the successive AK Party governments since 2002, according to former Minister Lütfi Elvan.

In recent months, reports noted that the government is in the process of coming up with a solution after evaluating a report presented at a Cabinet meeting chaired by President Recep Tayyip Erdoğan in October.

The president had said that they discussed the “extensive” report prepared after visits to some 1,585 cemevis across the country. The visits came after Interior Minister Süleyman Soylu asked Alevi activist Dr. Ali Arif Özzeybek to visit cemevis and Alevi villages across Turkey to find the roots of the problems and to ensure that the issue was approached in a non-political manner. Özzeybek worked as an advisor to main opposition Republican People’s Party (CHP) Chairperson Kemal Kılıçdaroğlu – an Alevi himself – between 2011-2018 and joined the AK Party Central Decision-Making and Administrative Committee (MKYK) in March 2021. His visits to over 1,500 cemevis happened in the span of approximately seven months in 2021, according to the interior minister.

“We want to solve this issue without politicization, and we will continue to strive to do so. We are all brothers,” Soylu said during an interview in late November, adding that the Alevi citizens are “fundamental and inseparable elements” of Turkish society and the government will not allow anyone to discriminate against them.

“We are obliged to fulfill our duties,” Soylu said and alluded to the saying of the Prophet Muhammad: “Unity is a mercy and disunity is a punishment.”

Last week, Erdoğan inaugurated the Yunus Emre Cemevi in Turkey’s southeastern Gaziantep province near the Syrian border. The modern compound was built in the Şahinbey district in cooperation with the Alevi Cultural Association, the AK Party-led Gaziantep Metropolitan Municipality and the governor’s office after the community stated that a single compound was not enough for the province’s community.

Earlier in December, Justice Minister Abdülhamit Gül visited the Tunceli Cemevi, where he clearly signaled that the government is serious about taking action.

“We reject any policies that reject Alevi beliefs and our Alevi citizens. As the Justice Ministry, we have completed our work regarding the legal recognition of cemevis in terms of regulations,” Gül said.

Noting that the AK Party is sincere about responding to the demands of the Alevis, Gül said their demands are legitimate and valid, as he thanked cemevis’ spiritual leaders, dedes, for their cooperation.

“May we all work to ensure that our brotherhood lasts many thousands of years,” the minister added.

Meanwhile, AK Party sources told Daily Sabah that the party will continue to work for all citizens, as they highlighted that President Erdoğan, who almost always ends his public speeches by referencing Haji Bektash Veli's famous words “Let us be united, let us be strong, let us be alive,” has the leadership skills to unite all citizens.

While the sources did not give a timeline or more details about the ongoing works, they said the Alevi community should rest assured that the government will take action for their needs.

They continued by pointing to the different opinions among the Alevi community regarding potential regulations, such as the idea of creating a directorate for Alevi affairs, similar to the Presidency of Religious Affairs (Diyanet). They noted that consensus among the community is imperative to determine the future of cemevis, one of the main concerns of the community.

In the past decades, AK Party governments aimed to reinstate the rights of minorities and help their survival as their numbers have dwindled over time. Long treated as second-class citizens, the Greek, Jewish, Armenian and Syriac non-Muslim communities have praised the return of their rights, though they have complained about it being a slow process. In 2018, all of them even came together to sign a joint declaration rejecting allegations that members of minority faiths in Turkey had been experiencing “pressure” on their communities, saying that they are free to practice their religion in the country.

But the situation is different for Alevis, as their faith is explained as a combination of Shiite Islam, Bektashi Sufi order and Anatolian folk culture, rather than a separate religion.

In 2009, the first Alevi initiative was launched during the term of then-Prime Minister Erdoğan. Alevi leaders and representatives attended several workshops with the government over a six-month period. Later in 2011, Erdoğan issued an unprecedented apology on behalf of the Turkish state for the Dersim tragedy, which took place in 1937, when 13,806 people were killed following a military campaign after the predominantly-Alevi Zaza Kurdish tribes opposed the 1934 Resettlement Law passed by the CHP during the single-party regime. The discussion process was interrupted during the Gezi Park riots in 2013, but an "Alevi opening" initiative was launched in 2014, and a council was formed to discuss issues in 2016, but there have not been any concrete developments since.

Highlighting the importance of coexistence among different cultures and beliefs in the country, Celal Fırat, the president of the Alevi Associations Federation, told Daily Sabah that it is the state’s responsibility to protect differences and prevent the suppression of minorities by the majority. But for him, what is even more important is the idea that the Alevi community is more independent than ever and does not want to be shaped or exploited by the ruling or opposition parties.

“The main question is about whether political parties will fulfill their pledges made to Alevis or not ... And what the opposition thinks or would do is not on the Alevis’ agenda,” Fırat said, adding that each Alevi citizen has the will to vote for whatever party they wish to, for the sake of their individual freedom of belief.

He noted that the state’s “insistence” on defining beliefs and the exclusion of non-Sunni communities have historically led to an “insincere” relationship and said he does not believe any initiatives will produce results unless they take into consideration legal decisions and consider the expectations and sensitivities of all Alevis.

The Alevi community leader continued by expressing his community’s dismay on the failure of the implementation of European Court of Human Rights (ECtHR) decisions, arguing that the status of Alevi houses of worship and cultural and social complexes need revision.

In 2016, the European court ruled in favor of Turkish Alevi community leaders and members in the case brought for the official recognition of cemevis as houses of worship.

Fırat also highlighted the importance of unity and the language of love for a better future for all in the country.

Another Alevi community leader, who asked to remain anonymous, told Daily Sabah that they were in favor of discussing their problems with the government, as they noted that there are political and ideological divisions among the community that have become obstacles. However, they noted that they are hopeful the issue can be resolved through dialogue if both sides are genuinely determined to find a solution and can openly discuss issues.

“The issue of the status of cemevis and revision of school curriculum to exclude Alevi students from religion classes are critical for almost all Alevis and require immediate attention when discussing the issue,” the Alevi community leader told Daily Sabah, adding that they are hopeful about the government taking action, based on their record with other religious communities in the past.

The common motif among remarks made by politicians and community leaders seems to highlight the idea that unity, compassion and determination are essential to solving the issue.

“We need to make sure that the rhetoric of love for humanity as told by Haji Bektash, Rumi, Yunus Emre and our poet-singers are cherished in this region,” according to Fırat.