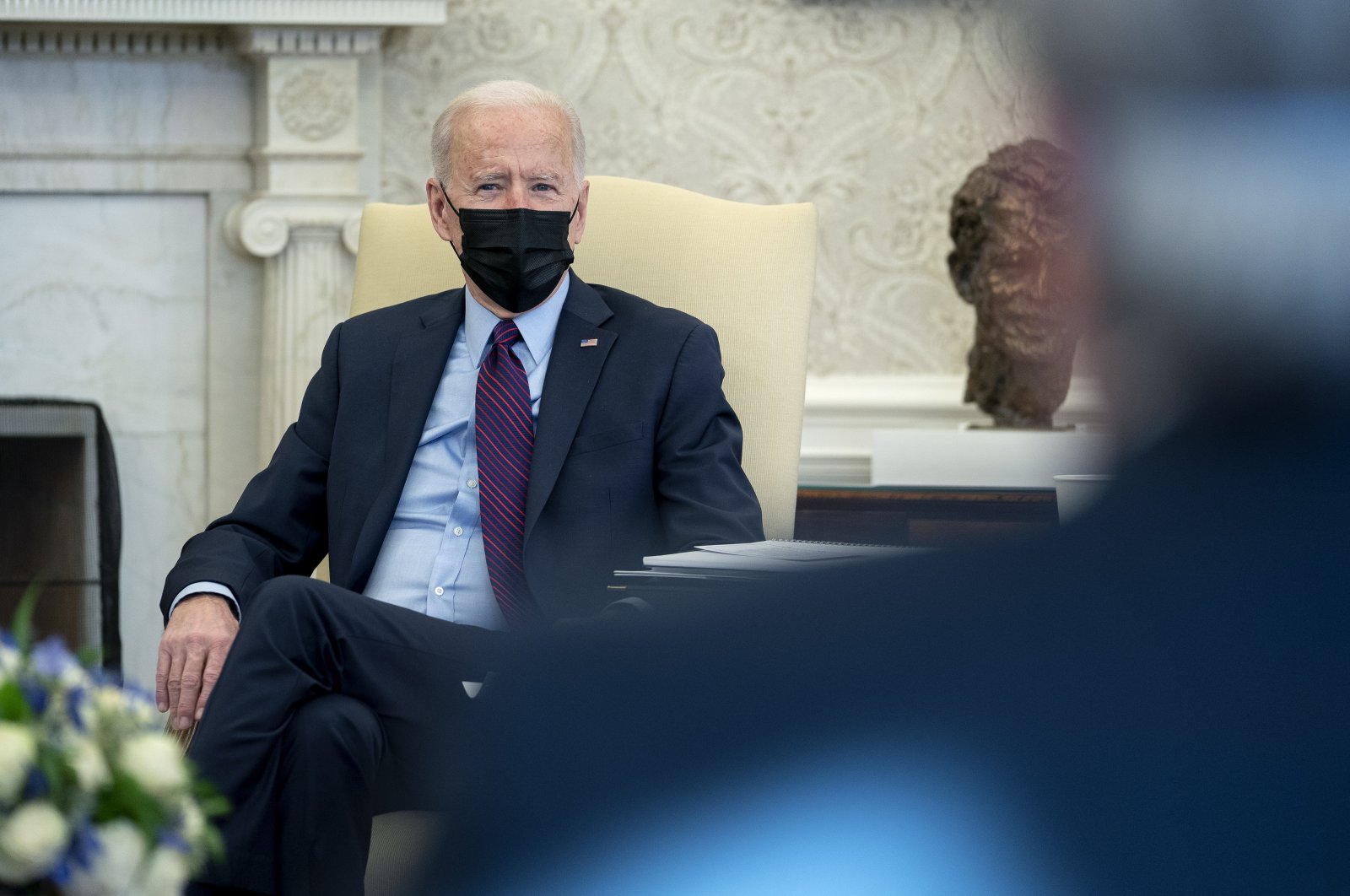 U.S. President Joe Biden speaks during a meeting with Vice President Kamala Harris, Speaker of the House Nancy Pelosi and the chairs of the House committees to discuss a coronavirus relief package in the Oval Office of the White House in Washington, D.C., U.S., Feb. 5, 2021. (EPA Photo)
by Nur Özkan Erbay
Mar 04, 2021 1:02 pm

A letter from members of the U.S. House of Representatives last week for Secretary of State Anthony Blinken demanded that President Joe Biden increase the pressure on alleged human rights abuses in Turkey.

In February last month, U.S. senators, this time in a letter to Biden, criticized Turkey's fight against the terrorist organizations PKK/YPG and again demanded that it stop operations in Syria over the same so-called human rights rhetoric.

There are many reasons to think that these letters to the Biden administration from members of Congress are a good cop, bad cop game. In fact, they appear to be an act of consultation that seem to be a mock fight between the U.S. Congress, the Senate, the White House and the State Department.

However, every time Turkey says that a controversial issue between the two countries should be resolved through dialogue and calls on the Washington administration to "talk," it is very doubtful that Congress will receive the opposite statement. So it is possible to say that this bad policing of Congress has given the Biden administration time and comfort in relation to Turkey.

How can it be explained that the U.S. Congress, on one hand, is trying to lecture Turkey on human rights, which played a key role in solving the murder of Saudi journalist Jamal Khashoggi, and on the other hand, is turning its back to the facts in U.S. intelligence reports?

How can Turkey's state, intelligence, judiciary, police and media, as well as its role and effort in shedding light on this murder, be ignored?

Although all the findings in the U.S. intelligence report indicated that Saudi Crown Prince Mohammed bin Salman (MBS) was behind the Khashoggi murder, the world did not hear from Biden about a sanctions decision against him. However, perhaps one of the most inhumane murders of this century was committed against a journalist, and the U.S. Congress could not even pass or even appeal for a sanction resolution against MBS.

What about the human rights of civilians killed by the PKK terrorist organization and its Syrian branch, the YPG, who continue to slaughter innocent people in Syria? Did the U.S. Congress pay tribute to the 13 unarmed Turkish citizens the PKK massacred after holding them captive for six years? Now that a U.S. Congress that is so selective about human rights is criticizing Turkey, it brings to mind that famous Indian proverb: “'If you point a finger at someone, three fingers are pointing back at you.”

All these hypocritical stances actually allow us to understand the answer to the questions of "who, what and why" Congress puts an emphasis on human rights. If the debate were really for human rights, a strong and decisive counter-stance would be expected from the U.S. administration and Congress against terrorist organizations and states or persons using terrorist methods.

Moreover, if democracy was the real issue here, wouldn't the United States be expected to condemn the coup attempt in Armenia? Whether or not the U.S. State Department wants Armenian Prime Minister Nikol Pashinian to be overthrown by the Armenian military, it should be supported by democratic principles and moral norms – but the U.S. has not offered such support. Instead, he declared that there were not enough conditions to describe the events in Armenia as a coup.

It is clear Washington will run with the hare and hunt with the hounds in the coming period. For instance, the initial statement of the U.S. State Department spokesperson against the Turkish citizens who were massacred by the PKK, and his following statements could be explanatory evidence of this situation. Spokesperson Ned Price hinted that they could condemn the massacre if they were certain that the PKK had killed the 13 Turkish citizens. On one hand, the U.S. government cannot be sure that the PKK/YPG has killed them, and on the other hand, he can openly say that Turkey and the U.S. share interests and signaled for cooperation in Syria where the U.S. is still a major guarantor of the PKK/YPG’s presence in there.

In addition, the same spokesperson issued a condemning statement on behalf of the U.S. government over the brutal attack by forces loyal to Bashar Assad's regime that killed 34 Turkish soldiers in northwestern Syria's Idlib province a year ago.

Another striking statement this week came from Blinken. In the statement, he said that using people as pawns for political purposes is unacceptable behavior, no matter what the country does.

Based on this explanation, the list of people, nonstate actors or groups that the U.S. has used as a pawn against other countries in the past is quite bulky. Turkey has a long list relating to this issue, including the leaders of the Gülenist Terror Group (FETO) and the PKK/YPG.

In this regard, Biden's confession to supporting opposition groups in Turkey during the elections remains fresh. Based on all this, it seems necessary that future messages from Washington about human rights, the fight against terrorism, alliances, common interests and relations with Turkey should first be submitted to a polygraph.

In the coming period, we will see whether the future messages from the U.S. Congress, the White House and the State Department toward Turkey are really a difference of opinion or good police, bad police diplomacy.