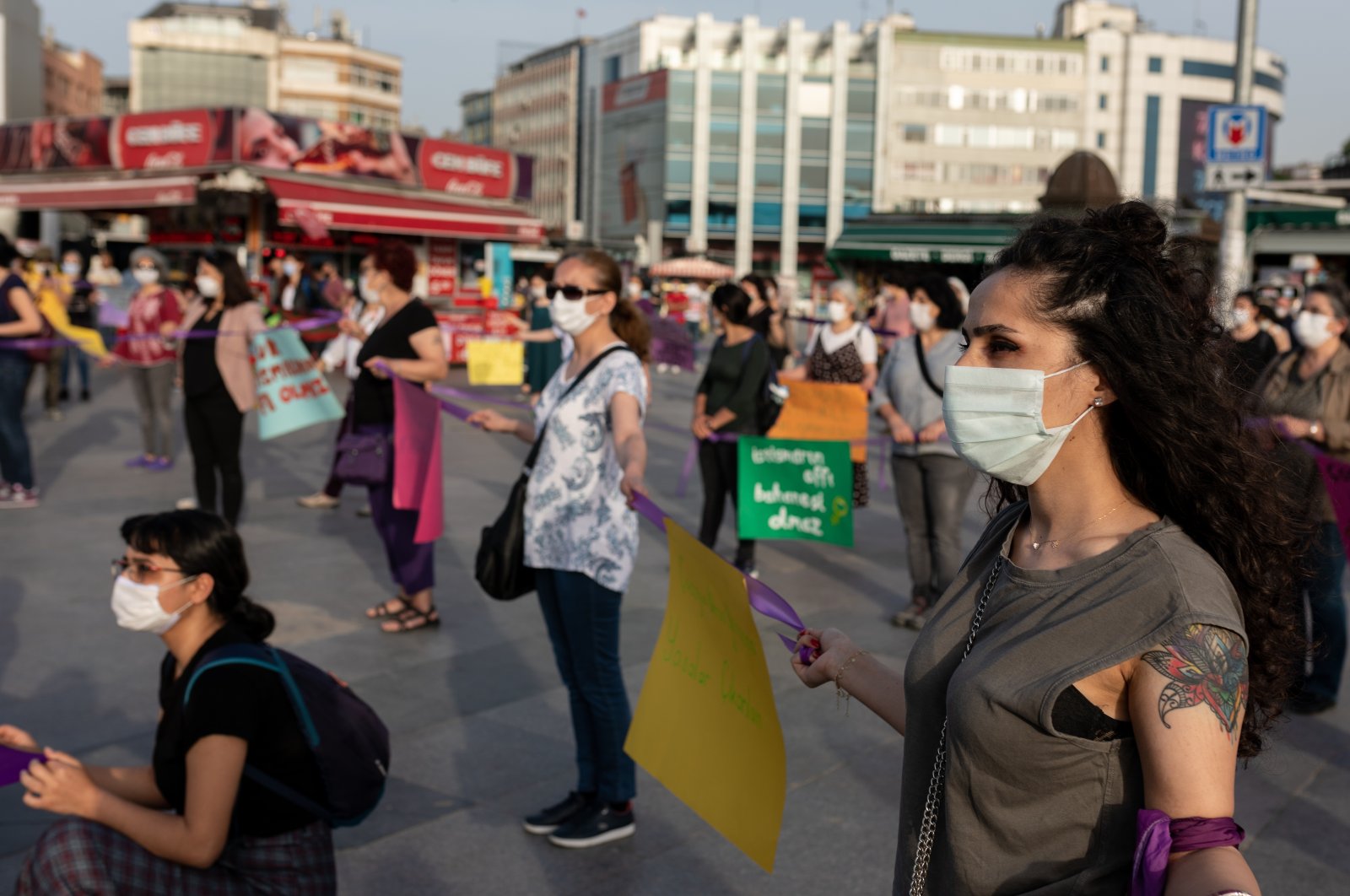 Women wearing protective face masks are seen during a demonstration to protest violence against women and child abuse during the coronavirus outbreak, Istanbul, Turkey, May 20, 2020. (Getty Images)
by Dilara Aslan Jul 23, 2021 11:57 am

Media, public awareness and changing society's perspective on violence against women are the most vital elements in fighting domestic violence, experts on the issue said while underlining that Turkey has made significant progress in this regard.

Turkey, earlier this month, unveiled a four-year plan for combating violence against women.

President Recep Tayyip Erdoğan announced that the plan includes five main goals, 28 strategies and 227 actions and that the first goal was to revise legislation and apply them effectively. The plan aims to reduce the number of cases of domestic violence and notorious “femicides.”

Erdoğan summed up the five main goals as facilitation of access to legal services for women, integration of the all-out fight against violence to all policies, raising public awareness and proper collection of data regarding the issue.

Varbanova underlined that Turkey has made significant progress in preventing violence against women.

Saying that an overall awareness has been created in Turkish society, Varbanova added: “Of course the law gives women certain rights; however, women need to be informed on how they can utilize these rights provided by law.”

Speaking during a parliament commission on researching the roots of violence against women and determining the necessary precautions, Varbanova said: “There is no country free from violence against women. We call this a ‘shadow pandemic.’ When we look at the whole world, we see that it is not fought sufficiently.”

Varbanova highlighted that there has been no increase in domestic violence around the world in the past 10 years and said: “One of every three women in the world has been subjected to domestic physical or sexual violence.”

She said that a similar picture is found in Turkey.

Last year, 266 women were victims of murders, often at the hands of their spouses, relatives or male friends. Some 95 women were killed in the first four months of this year according to the Interior Ministry. A report by the ministry presented to the Parliament last month indicates a drop in the number of domestic violence cases this year, from 77,000 to 73,000 in the first four months of 2021, while murders of women increased to 95 from 73 in the same period. Culprits were mostly husbands and boyfriends, but 15% of victims suffered at the hands of their parents, siblings or children. Though several cases of domestic violence taking place outside drew public ire, the majority of domestic violence cases took place in the homes of victims.

Varbanova stated that violence against women is not a solitary problem but rather society-based and that therefore, equality between women and men in the society must be enhanced further.

Şuay Nilhan Açıkalın, assistant professor at Ankara Hacı Bayram Veli University, told Daily Sabah that violence against women is mainly a global problem and that perpetrators of these crimes can be found in all cultures, economies and geographies.

“Violence against women is negatively affecting not only the victims whose fundamental rights are ignored but also their families and the society,” Açıkalın stated, indicating that migrants, women living in conflict zones and disabled women are in a more disadvantaged position.

“In the light of this reality, one of the most important things is that all sectors of society voice they are totally against violence on women. This societal emphasis plays an important role especially in the fight against (violence towards) women since behaviors out of the societal acceptance field have no sustainability.”

Açıkalın further touched upon the importance of media – both print and visual – in being a means in this regard. She elaborated that it is vital that media does not use language that might encourage or evoke violence against women; instead, it should be used to educate people on the matter and contribute to the fight against violence.

She also stressed the importance of cutting the chain that enables violence to be passed down to the next generation with children being witnesses of domestic violence implementing the same acts in their own adult lives.

“The best way to ensure this is to increase domestic communication, societal education and informing efforts.”

Speaking of the five main goals of the recently announced action plan, Açıkalın said that each of these are crucial components.

On the facilitation of access to legal services for women, Açıkalın elaborated that decreasing bureaucratic hindrance, as well as documents to a minimum, is notable. She also said that training for public prosecutors working in bureaus on violence against women and domestic violence is a significant element.

She pointed out the preventive measures of psychosocial support to individuals and children subject to violence. Such measures can help to increase their living standards and ensure that these individuals continue their education.

On the other hand, researching the students’ perception and approach toward violence will also give an idea on defining violence and tendencies, she added.

The action plan also included the proper collection of data regarding the issue. Açıkalın stated that within this scope, risk maps will be created for Turkey’s 81 provinces that will help guide local policies. These maps will be shared with administrative chiefs, local authorities and nongovernmental organizations (NGOs ) to take the necessary precautions instantly.

On the Istanbul Convention, an international treaty for combating violence against women, from which Turkey withdrew in July, the U.N. director said that “the decision must be reconsidered.”

Rights organizations and especially the West have criticized Ankara’s decision, saying it will put women at greater risk of violence when femicide is already prevalent in Turkey.

“We believe that this is a step backward and that it undermines the investment and steps taken till now in the fight against violence on women. Because the Istanbul Convention is actually the most comprehensive and first international agreement on this issue,” Varbanova elaborated.

Açıkalın, on the other side, said that the intention of Western countries to create a negative image of Turkey through the Istanbul Convention is a malevolent effort independent of the fight against violence against women.

Reminding that some European Council member countries – including Hungary, Bulgaria, Slovakia and Latvia – that signed the convention did not implement and ratify it, Açıkalın said that Turkey’s withdrawal does not mean the end of the fight against violence against women.

It is an important development that a mass mobilization has been announced to prevent violence against women with the cooperation of all public institutions, NGOs and the private sector, Açıkalın added.

“Most of the statements on domestic violence and violence against women mentioned in the Istanbul Convention are found in the 4th National Action Plan on Combating Violence Against Women and are similar,” Açıkalın said, indicating that Turkey’s withdrawal does not mean a step back in the fight and that it is more important that these articles are implemented and that they result in a successful transformation of the society.

The parliament commission's head Öznur Çalık stated similarly that Turkey started the fight against violence against women before the Istanbul Convention.

“The decision to withdraw from the Istanbul Convention is Turkey’s decision. Everyone must respect this,” Çalık said.