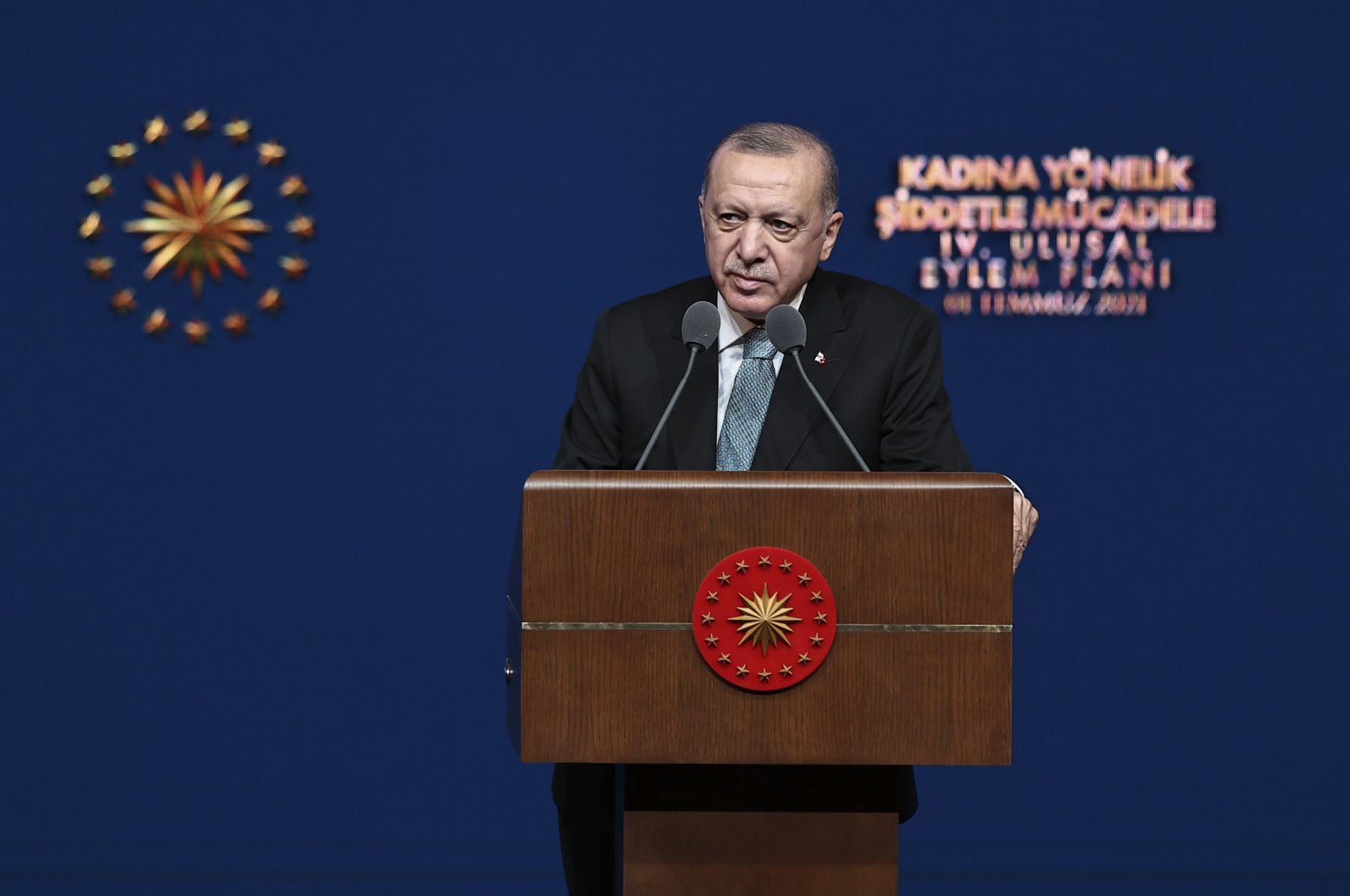 President Recep Tayyip Erdoğan speaks at the launch of the plan at the Presidential Complex, in the capital Ankara, Turkey, July 1, 2021. (AA PHOTO)
by DAILY SABAH Jul 01, 2021 2:54 pm
RECOMMENDED

Turkey on Thursday unveiled a four-year plan for combating violence against women. President Recep Tayyip Erdoğan announced that the plan includes five main goals, 28 strategies and 227 actions and the first goal was to revise legislation and apply them effectively.

“Fighting violence against women has always been our priority. I support every step taken to that extent,” Erdoğan said as he unveiled the fourth action plan in the fight against violence targeting women.

The plan aims to reduce the number of cases of domestic violence and notorious “femicides.” Erdoğan, top government officials and representatives of nongovernmental organizations (NGOs) convened at the Presidential Complex in the capital Ankara Thursday for the launch of the plan.

Erdoğan said the violence against women had many different aspects and they first need to examine the factors contributing to the violence and eliminate them. “The possibility of children who considers violence as a normal behavior as future culprits of violence is high. The violence also aggravates rates of depression, crime rate and overall unrest in the society. We need to tackle the issue sincerely. Violence against women is a problem all countries face. We are trying to overcome it with legal regulations, measures of prevention and protection,” he said. Erdoğan noted that the action plan, the first edition of which was issued in 2007, was always being updated.

Last year, 266 women were victims of murders, often at the hands of their spouses, relatives or male friends. Some 95 women were killed in the first four months of this year according to the Interior Ministry. A report by the ministry presented to the Parliament last month indicates a drop in the number of domestic violence cases this year, from 77,000 to 73,000 in the first four months of 2021, while murders of women increased to 95 from 73 in the same period. Culprits were mostly husbands and boyfriends but 15% of victims suffered at the hands of their parents, siblings or children. Though several cases of domestic violence taking place outside drew public ire, the majority of domestic violence cases took place in the homes of victims.

Erdoğan summed up the five main goals as facilitation of access to legal services for women, integration of the all-out fight against violence to all policies, raising public awareness and proper collection of data regarding the issue. “Based on changing circumstances, we will continue taking every legal measure,” he added. He said the first goal was to revise existing regulations and their effective implementation, noting that ministries signed protocols to coordinate efforts and provincial coordination committees were set up in every province to tackle the issue. He said they would also revise regulations on stalking women, cyber violence and forced marriages. Another part of the plan is training public sector personnel on the issue. Erdoğan stated that they also wanted more efficient use of protective and preventive measures. “We will implement special intervention programs specific for each case and empower the staff assisting violence victims." He also pointed out a new practice: anger management training for perpetrators of violence and people with the potential to commit acts of violence. The government will open nine new shelters in seven provinces for victims of violence.

Public awareness remains a key point on the issue. “Under the plan, we will create an understanding of the fight against violence at all levels of education. We will carry out efforts to educate media on responsible and ethical coverage of (cases of violence),” the president said. Fathers will be educated on forced marriages and their consequences.

The plan also includes activities to prevent sexual and physical violence in the workplace. The last goal of the plan involves the collection of reliable data on the issue. “It is important to determine risk factors that create violence. Violence risk maps will be drafted for 81 provinces. Obtained data will be assessed by NGOs and universities and ministries will set up a joint database,” Erdoğan said.