New major operation against YPG inevitable if promises not fulfilled 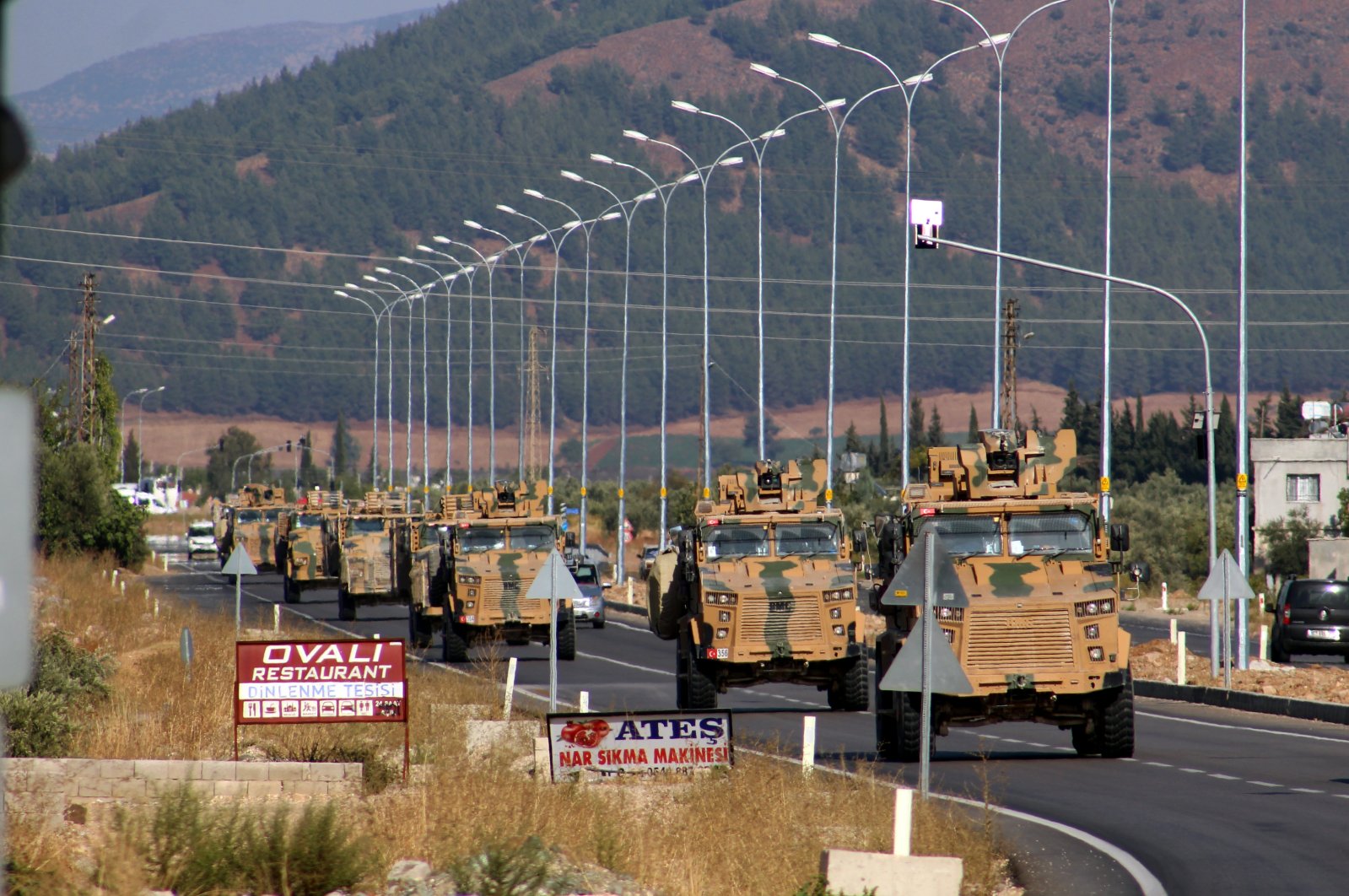 The attacks carried out by the PKK terrorist organization and its Syrian branch YPG on safe areas in northern Syria have pressed Turkey to take urgent action. As Moscow and Washington have not fulfilled the requirements of agreements made two years ago, Ankara is left with no alternative but to finish the job it started.

In October 2019, Turkey's Operation Peace Spring, which caused the American and Russian administrations to sit down at the table with Ankara, was not fully stopped but paused. Now, again, the likelihood that Turkey will take new action in the operation is very high due to the fact that Moscow and Washington have still failed to hold up their ends of the agreements over the past two years.

According to the latest warnings Turkey has issued, the country may strike a major blow to the terrorist organization at any time, although no date or time has been specified, according to sources in Ankara. While all of Turkey's operational capacity is ready, as usual, the country prefers to keep diplomatic channels open and give the involved parties a chance to fulfill their commitments.

Recently, a guided missile fired by the YPG terrorist organization from Tal Rifaat, which was supposed to be cleared of the PKK/YPG in accordance with an agreement with Russia in 2019, landed in Azaz in the Operation Euphrates Shield zone. As a result of the attack, two special operations police officers were killed.

This attack was followed by a car bomb that exploded in Afrin, which is again under Turkish control. Separately, ammunition shells fired across the border from Syria's Jarablus caused explosions at two separate locations in southern Gaziantep province's Karkamış district. A third shell landed within Jarablus, it said, adding that it was believed to have been launched from a region controlled by the YPG.

Successive statements from President Recep Tayyip Erdoğan, Foreign Minister Mevlüt Çavuşoğlu and Defense Minister Hulusi Akar after the attacks should be perceived as Turkey's latest warning to its interlocutors on the ground.

Erdoğan strongly underlined that Turkey was determined to eliminate threats originating in northern Syria, adding that the YPG killing two Turkish police officers in a terrorist attack was "the final straw” on Monday.

The United States and Russia are responsible in part for the attacks carried out in northern Syria by the YPG, Çavuşoğlu said Wednesday, adding that the two countries had not kept their promises.

Akar's statements should also be carefully noted. The defense minister stated that, since Turkey has fulfilled the promises made in agreements with the U.S. and Russia, no one should doubt that the country will do whatever is necessary to counter the attacks of the PKK/YPG in northern Syria when the time and place are right.

Following these statements, it is worth recalling the promises made by the U.S. and Russia to Turkey in accordance with the agreements reached in 2019.

Following Operation Peace Spring, the third operation Turkey held across the border in Syria, Ankara signed separate agreements with Washington and Moscow in 2019.

"Operation Peace Spring is not stopped but paused," Çavuşoğlu said in a news conference following the meetings. "This is not a cease-fire. Turkey can only stop the operation once all terrorist elements leave the (Syria) safe zone."

On the other hand, although Washington and Moscow made agreements to stop Turkey's military action, neither has fulfilled its commitments in these agreements.

According to the Turkey-U.S. agreement, Turkish and U.S. delegations agreed that Turkey would pause its counterterrorism operation in northern Syria for five days, during which time the YPG must withdraw from the proposed safe zone area. The deal included not only the withdrawal of YPG terrorists but also having their weapons seized and their fortifications and positions dismantled.

As part of the agreement, the U.S. said it would facilitate the orderly withdrawal of the PKK-affiliated terrorist group within 120 hours, as well as seize heavy weapons and disable fortifications belonging to the YPG.

The delegations also agreed that Ain al-Arab will not be included in the safe zone in northern Syria, which is to be "primarily enforced" by the Turkish Armed Forces (TSK), according to the agreement.

Then-U.S. Vice President Mike Pence said later in a separate news conference that the YPG will withdraw from the demarcation line 32 kilometers (20 miles) south of the Turkish border, stating several times that an "orderly withdrawal" is already underway. He said that the YPG had given Washington repeated assurances that they were leaving the areas specified under the agreement.

The 13-point Turkey-U.S. joint statement on northeastern Syria also added that this "will include coordination on detention facilities and internally displaced persons from formerly Daesh controlled areas."

Although the U.S. is still not fulfilling its obligations in this agreement by continuing its political and logistical support for the PKK/YPG terrorist organization, Turkey is currently in the process of capturing and bringing the Daesh ringleaders to justice one by one. In contrast, Washington has been providing guarantees to the YPG, making moves that further encourage its presence in the areas where it still exists.

According to the deal between Turkey and Russia signed on Oct. 22, 2019, in Sochi, just a few days after U.S. authorities signed their agreement with Ankara, both the Turkish and Russian presidents reiterated their commitment to the preservation of the political unity and territorial integrity of Syria and the protection of Turkey's national security. Also, they emphasized their determination to combat terrorism in all its forms and manifestations and to disrupt separatist agendas on Syrian territory. The established status quo in the current Operation Peace Spring area, covering Tal Abyad and Ras al-Ain within a depth of 32 kilometers, would be preserved. Both sides reaffirmed the importance of the Adana Agreement. The Russian Federation was to facilitate the implementation of the Adana Agreement in the current circumstances.

Since then, it has been very apparent that Moscow has not complied with crucial clauses of the Sochi agreement. According to these articles, by noon local time on Oct. 23, 2019, Russian military police and Syrian border guards were supposed to enter the Syrian side of the Turkish-Syrian border outside the area of Operation Peace Spring to facilitate the removal of YPG elements and their weapons to a distance of 30 kilometers from the Turkish-Syrian border. At that point, joint Russian-Turkish patrols would have started in the west and the east of the area of Operation Peace Spring within a depth of 10 kilometers, excluding Qamishli city. Additionally, all YPG elements and their weapons were to have been removed from Manbij and Tal Rifaat. Finally, both sides were supposed to take necessary measures to prevent the infiltration of terrorist elements.

Now, especially when looking at these articles, it is clear that Moscow has not fulfilled its promise to remove the PKK/YPG from Tal Rifaat and Manbij and complete the seizure of their weapons since many of the attacks on civilians and Turkish military and police in safe areas in Syria obviously come from these regions.

In addition, Article 7 of the agreement states that "both sides will take the necessary measures against any terrorist attack and infiltration in their areas of responsibility." Despite this, when we take a closer look at the last two years, it is clear that Russia has openly turned a blind eye to terrorist attacks launched from these regions targeting areas that are under the control of Turkey.

Now, the statements made by both Erdoğan and Çavuşoğlu have returned us to the time before these agreements were concluded in October 2019. As stated, Turkey had suspended Operation Peace Spring with the expectation that it would reach a sustainable and reliable deal with its allies. Since Moscow and Washington have not fulfilled the requirements of these agreements over the last two years, Ankara is left with no alternative but to finish the job it started.