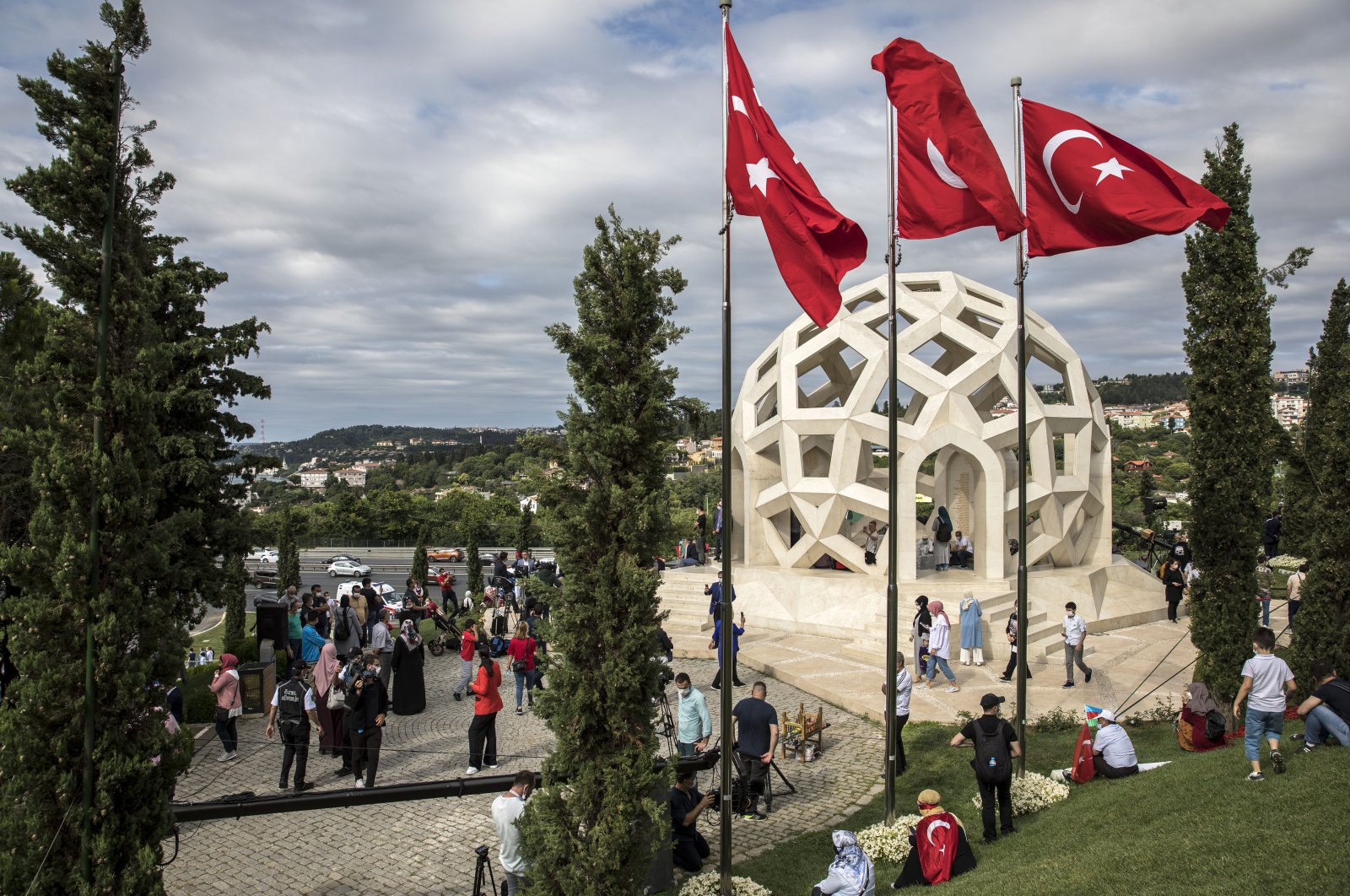 Today marks the fifth anniversary of the thwarted coup attempt, which left 251 people dead and nearly 2,200 injured. The Gülenist Terror Group (FETÖ) and its U.S.-based head Fetullah Gülen orchestrated the failed coup of July 15, 2016, in Turkey. FETÖ was also behind a long-running campaign to overthrow the state through the infiltration of Turkish institutions, particularly the military, police and the judiciary. The Turkish government remains more determined than ever not to let the putschists attempt a new coup, and oppose any rhetoric implying otherwise.

For the Turkish people, July 15 reminds them of their determination to protect the country, nation and its democracy.

Most recently, a Turkish court this week delivered its decision on the case of the Akıncı Air Base, which was used as a command center during the thwarted coup attempt. After a thorough investigation, the 4th Heavy Penal Court in the capital, Ankara, concluded that the group aimed to change the constitutional order in Turkey and create a non-national, illegitimate government in accordance with its ideology.

According to the Interior Ministry's numbers, 135,916 operations as well as 312,121 arrests have taken place toward FETÖ since July 15.

Ankara formally requested Gülen's extradition on July 19, 2016, and has been pressing the U.S. ever since, sending hundreds of folders full of evidence implicating Gülen and FETÖ in the coup attempt. The issue has been raised in bilateral meetings between Turkish and American officials in phone calls, letters and other exchanges.

Turkey also sought a preventive arrest to keep Gülen in the U.S. after reports emerged that the terrorist leader was planning to flee to another country. The U.S. has been reluctant to extradite him, claiming insufficient evidence to associate him with the coup attempt.

The issue has created a deep rift in relations between the two countries. Despite Ankara's determined efforts, the administration of the former U.S. President Barack Obama took no action against the U.S.-based terrorist leader. Under normal circumstances, Gülen should have already been arrested, as Turkish authorities issued an official request for his extradition under the 1979 treaty between the U.S. and Turkey.

FETÖ is also making a huge amount of revenue from charter schools in the U.S., which also provides H1B program visas for members of the group. FETÖ earns approximately $7,000 (TL 60, 381) to $10,000 from each student, corresponding to $750 million in total revenues from charter schools.

The colossal school network run by FETÖ around the world, from Central Asia to Africa and from Europe to America, is one of the primary businesses of the terrorist group. In African countries with more arbitrary legal structures and Western ones with strict institutionalized laws, the education business has been a lucrative gateway to building an economic powerhouse for FETÖ and its profiteering businesspeople. The economic value of the terrorist group, which has been nurtured with a transnational network of trading companies and businesses, was estimated to be around $25 billion in 2012.

Looking at the latest FETÖ activities in the U.S., it is still very active in many different fields across many states. The group operates over 218 charter schools that enroll about 80,000 students in 28 states. Texas is the U.S. state harboring the largest number of FETÖ-linked charter schools, hosting FETÖ's largest charter network: the Harmony Public Schools group. It is currently operating 57 schools, while an additional six schools are run under the name the School of Science and Technology (SST).

These charter schools are used to siphon federal funds, namely American taxpayers' money. In 2013, The Washington Post reported that in a testimony to a school board in Virginia, a former school teacher testified that FETÖ teachers "had to turn over 40% of their salaries to a secret fund used by the movement."

Next attempt at democracy

The Turkish nation displayed one of the strongest reactions against future coup attempts when a group of retired admirals signed a “declaration” targeting democratic institutions in April, almost five years after the coup bid.

Hundreds of thousands of people took to social media to protest the undermining of democratic institutions.

“Those making coup plans, trying to disrupt the unity of our country and aiming to polarize our people will be unsuccessful,” one social media user wrote. Another stated that Turkey has changed and that carrying out coups has become impossible.

“Protecting this country’s survival goes through respecting democracy and being loyal to the rule of law,” he wrote.

“The days of coups in the Turkish Republic have come to an end,” another social media user wrote on Twitter.

"Now, there is the trend of making headlines at midnight. Whoever becomes unable to sleep starts to work on how to create a disruption. Unfortunately, paying the costs of such actions becomes the duty of our nation each time. This declaration of 104 admirals is the most recent example of this trend," she underlined.

Earlier, Nationalist Movement Party (MHP) leader Devlet Bahçeli called the admirals' declaration a call for a coup, adding that the statement targeted democracy and the national will. Speaking during a party meeting in the capital, Ankara, Bahçeli referred to the declaration as a black stain on the history of Turkish democracy. "Clearing this stain is the honor of democracy, law, and national will against history," he said. The MHP leader suggested that the admirals had committed a crime by releasing the statement, declaring, "This crime cannot and will not go unpunished." Bahçeli said it was a call for a coup. "This statement violates the law, and (it's) a weapon directed at the national will."

Some 104 retired navy admirals had signed a "declaration" warning the government to keep its commitment to the Montreux Convention and abandon plans to build a new canal in Istanbul.

The declaration came under fire for featuring coup implications. Officials noted that while there was no problem with ex-admirals or ex-generals individually expressing their opinions under the framework of freedom of expression, they noted that signing a declaration with their titles as “retired generals” raises serious concerns in terms of democracy.

The Ankara Prosecutor’s Office also launched an investigation based on Article 316/1 of the Turkish Penal Code. In a statement, the prosecutor’s office said 10 suspects were detained to prevent the destruction of evidence and to confirm other suspects involved in the incident. Four other suspects were not detained due to their age but were told to report to the Ankara Police Directorate within three days.

After Turkey decided to withdraw from the Istanbul Convention – a European treaty aimed at preventing and combating violence against women – with a presidential decree, the government questioned whether Turkey could withdraw from other international agreements the same way. In a TV interview, Parliament Speaker Mustafa Şentop said it was technically possible and gave the example of the Montreux Convention Regarding the Regime of the Straits. Following discussions about Şentop's statements, 104 retired admirals released a statement warning the government.

The Montreux Convention Regarding the Regime of the Straits is a 1936 agreement that gives Turkey control over the Bosporus and Dardanelles and regulates the transit of naval warships. The convention guarantees the free passage of civilian vessels in times of peace and restricts the passage of naval ships that do not belong to the Black Sea states. Signed on July 20, 1936, at the Montreux Palace in Switzerland, the convention permitted Turkey to remilitarize the Bosporus and Dardanelles. It went into effect on Nov. 9, 1936, and was registered in the League of Nations Treaty Series on Dec. 11, 1936.