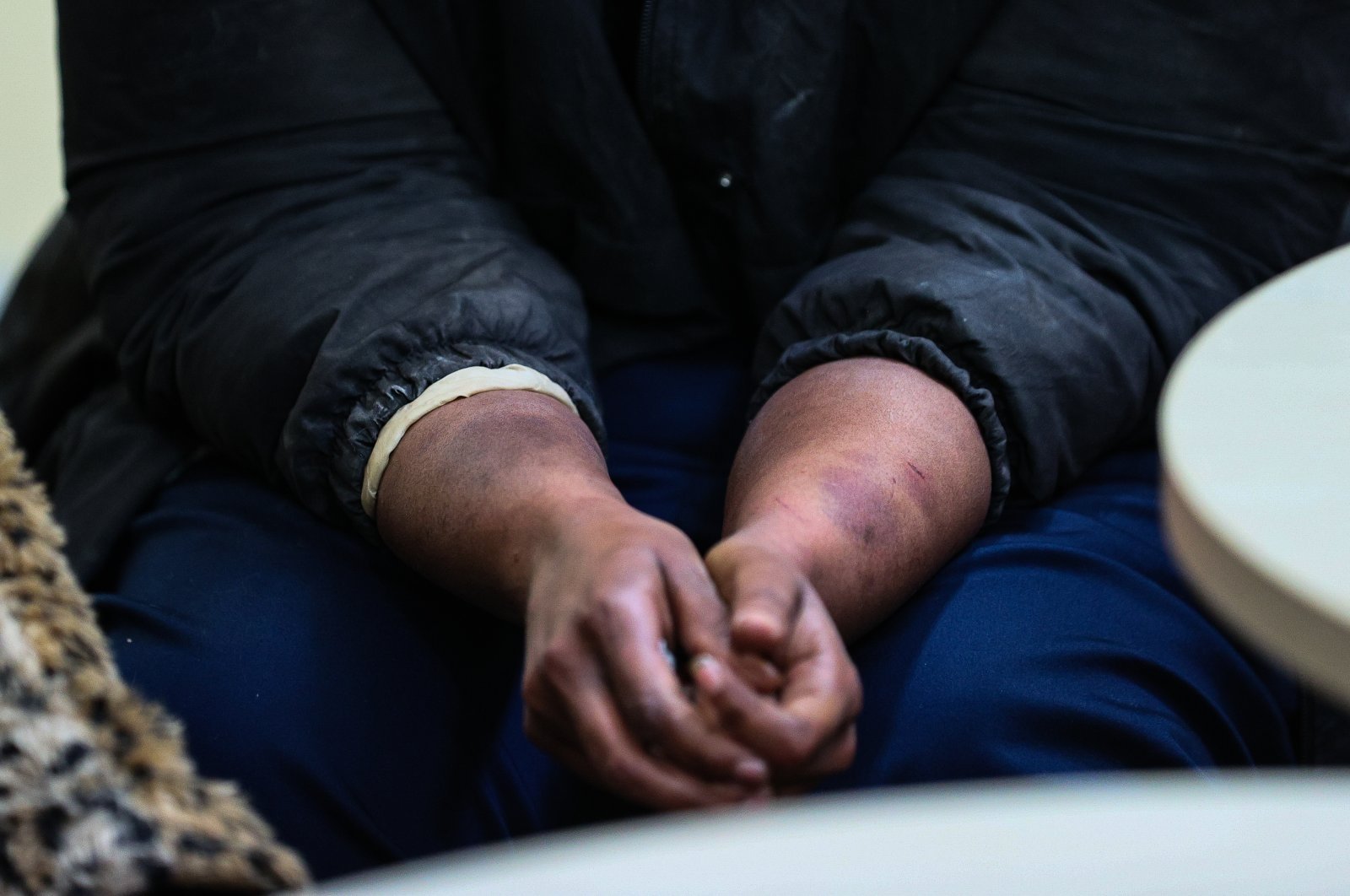 Somalian national Muna Hasım Dra, a migrant pushed back and beaten by Greek forces, is seen at the regional migration directorate in Izmir, Turkey, Nov. 20, 2021. (AA Photo)
by Agencies Dec 03, 2021 11:04 am
RECOMMENDED

Dozens of refugee rights groups in Greece called on Pope Francis on Thursday to help put an end to illegal migrant pushbacks carried out by Greek border forces.

"Reports of serious violations of human rights taking place across European borders, to the extent of pushing people back to Turkey, have been corroborated by international organizations," the 36 groups said in a letter to the pope, who is visiting on Saturday, unveiled at a press conference Thursday.

"This systematic practice endangers the life of people, including young children, that often end up abandoned in the middle of the sea."

"This illegal practice must end, and we ask you to deploy all your influence, in order for this to stop and in order to establish an independent border monitoring mechanism that will investigate these events," the groups including medical charity Medecins du Monde and Jesuit Refugee Service Greece said.

Nongovernmental organizations (NGOs) in Greece have repeatedly decried slow asylum procedures and the alleged mistreatment of migrants and refugees in camps and at the EU member's borders, which Greece's government steadfastly denies.

In one such case, the Greek ombudsman on Wednesday launched an investigation into a claim made by an interpreter for the European Union border agency Frontex that Greek border guards assaulted him and illegally expelled him to Turkey.

In a New York Times article published Wednesday, the interpreter, who is originally from Afghanistan but had been living in Italy for several years, said that Greek border guards detained him along with around 100 migrants.

The interpreter said that he as well as many of the migrants were then beaten, stripped and forced to hand over money, telephones and documentation.

He said when he tried to explain his position he was met with laughter and was beaten, adding that he had informed Frontex what had happened.

Ylva Johansson, the European commissioner for migration, told the New York Times she had spoken with the man on Nov. 25 and then raised the matter with the Greek government four days later.

The Greek ombudsman's office is investigating the claim.

European Union officials are already separately looking into allegations of maltreatment of the man, who says the guards mistook him for an asylum-seeker.

Asked about the issue on Thursday, government spokesperson Giannis Economou said Greek authorities "evaluate any complaint from trusted and reliable sources" and that competent authorities "are doing their jobs within their responsibilities."

In November, German MEP Cornelia Ernst said she had found five Somali migrants hiding from a "potential pushback" on the island of Samos.

Migration Minister Notis Mitarachi at the time said he had asked the national transparency authority, an independent watchdog that usually monitors civil service corruption, to investigate.

Francis has denounced the "hostility" and "exploitation" migrants in Europe have faced. On Sunday the pontiff will visit the island of Lesbos, one of the main gateways for refugees to Europe.

Lesbos was home to Europe's largest refugee camp until it burned down last year. The pope is scheduled to visit a new camp and speak to some of the residents.

Greek Prime Minister Kyriakos Mitsotakis angrily defended Greece's controversial migration policy last month in a heated debate with a reporter who accused him of "narcissistic abuse" during a press conference with his Dutch counterpart in Athens. The reporter echoed the call of many rights groups and organizations urging Athens to stop lying and admit to the systematic policy of "cruel and barbarian pushbacks."

Hundreds of people have died at sea as a number of boats carrying refugees have sunk or capsized. The Turkish Coast Guard Command has rescued thousands of others.