No light at end of tunnel for Syria conflict: Turkish Red Crescent 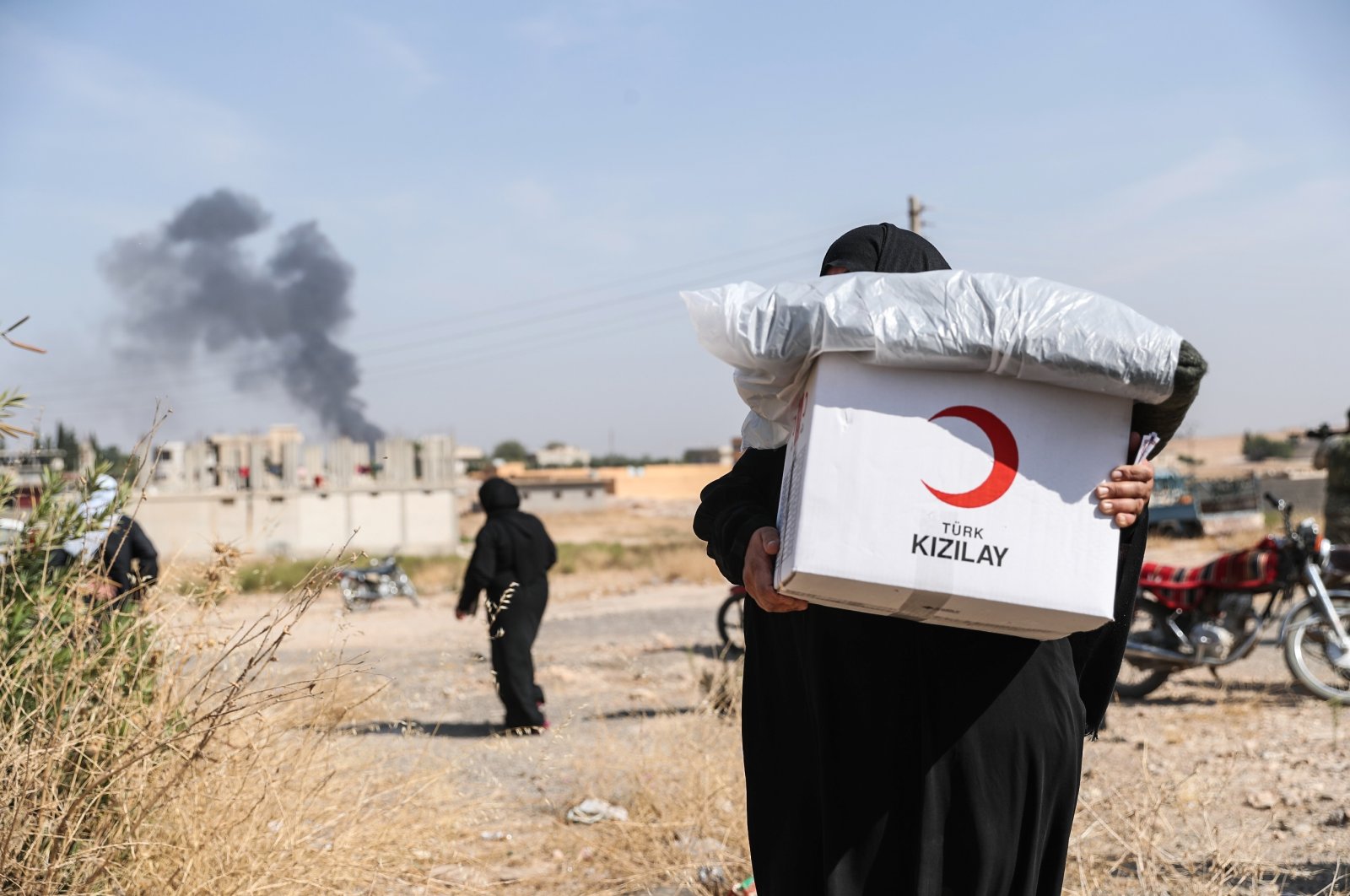 As Syria marks 10 years of conflict on Monday, Turkish Red Crescent (Kızılay) head Kerem Kınık stated that looking at the current situation in the war-ravaged country, there is no light at the end of the tunnel.

“But we have still opportunities," Kınık pointed out, speaking to Anadolu Agency (AA). "For example, this month, there will be a Syria conference," said Kınık, who is also vice president of the International Federation of Red Cross and Red Crescent Societies (IFRC).

"If the international community, if the superpowers, if the institutions make a strong commitment to conflict resolution and peace-building and resolution of this crisis, and if (they) set up a strong mechanism for protecting the human rights of refugees or IDPs (internally displaced persons) ... I believe this will create a positive atmosphere among refugees," he said.

"But," he added, "I have to say that unfortunately, there is no proper mechanism for providing this kind of atmosphere or environment for refugees."

According to Kınık, as March 15 marks a full decade of the Syrian crisis, "this is another signal for all mankind that this is the new world order."

"And there is no punishment or formulation (for a solution). There is no intervention in the crisis. There is no proper mechanism for preventive measures for the crisis. And this is not good for the future of the world," he explained.

Noting that during the war almost half of Syria's total population left their homes and one out of four left Syria, Kınık said: "Over 1 million babies were born as refugee babies outside of their home country."

Kınık added that they are working as monitoring agencies, from the United Nations to the Red Cross and the Turkish Red Crescent (Kızılay) societies and to nongovernmental organizations (NGO), to hold back the tide of human suffering.

On March 15, 2011, Syrians took to the streets, demanding democratic reforms amid widespread protests in the Arab world that toppled dictators in Tunisia, Libya and Egypt.

The Syrian government brutally cracked down on peaceful protesters.

The crisis soon evolved into an all-out civil war that has drawn a motley of foreign fighters too. The conflict has since claimed the lives of at least 400,000 people, mostly civilians, according to the Britain-based Syrian Observatory for Human Rights, a war monitor.

Syria is a "living nightmare" where about half the children have never lived a day without war, United Nations Secretary-General Antonio Guterres said last week to mark the 10th anniversary of the conflict.

Within this scope, Kızılay has been working for 10 years to help meet the needs of the Syrian people.

In a written statement, the aid organization stated on Sunday that it continues to transfer aid material through the 14 border gates on the Turkish-Syrian border.

“With cooperation and conditional donations, around 55,000 trucks of aid material have been sent to Syria. With this aid material, 111,000 tents, 8 million food packages, 116 million bread, 2.7 million hygiene sets, 2.5 million stationery supplies, 65 million clothing and blankets were distributed,” it said.

Kızılay also opened several water wells and build water towers in the country’s north, meeting the locals’ need for water. So far, 38 million tons of water have been transferred to the needy.

“Turkey, which started the briquette houses project for Syrians to overcome the war psychology and be able to live a settled life, has started to deliver the houses to families in the Idlib region,” Kızılay said, adding that it completed 748 of 1,228 houses in northwestern Idlib’s Mashat Ruhin region.

Speaking on the nearly 3.6 million Syrian refugees living in Turkey, Kınık said: "Since the beginning of the crisis, Turkey, applied an open-door policy to save lives. And Turkey saved millions."

He noted that Jordan and Lebanon followed the same policy, and in these three countries a total of almost 5.5 million Syrians sought shelter.

On Turkey's special legislation, the Temporary Protection Law for Syrians, Kınık said: "Through this framework, almost half a million newborn babies live in a safer environment with their basic rights, and they're receiving assistance from the government and from Kızılay regularly."

"Inside Syria, more than 2 million people have no access to school, but in Turkey, 80% of the Syrian refugees are able to access school, and in collaboration with European ECHO (the EU's European Civil Protection and Humanitarian Aid Operations) and UNICEF, we're providing scholarships for 700,000 students.

"We're encouraging their families to send their kids to school, not early marriage or the early labor market. And I have to say that they're living healthy, safe and happy in Turkey," he added.

Recently, in an exclusive interview to Daily Sabah, the United Nations High Commissioner for Refugees (UNHCR) Turkey representative Philippe Leclerc hailed Turkey’s contributions to Syrian refugees both inside Syria and in Turkey.

“Refugees not only found protection in Turkey but have been provided with security and a feeling of hope for their future,” he said.

“Turkey has a solid and comprehensive rights-based legal framework through its Law on Foreigners and International Protection and the Temporary Protection Regulation, which enables access to services including education, health care and its labor market for refugees in the country,” Leclerc stressed, saying that he is impressed by the efforts of the Turkish government and people after 10 years.

“We have to build on all the progress that has been made here. We have to ensure what has been achieved in terms of education, health, self-reliance is maintained in this extraordinarily difficult time of the pandemic affecting Turkish society as elsewhere in the world,” Leclerc said and highlighted that the UNHCR will "continue to advocate so that Turkey is assisted in continuing to provide this support so that Syrians can stand on their feet and contribute to the society that is hosting them, and preparing when the time comes, hopefully, also to rebuild their country.”

Turkey has frequently called on the international community to also improve humanitarian conditions inside Syria, in particular in certain areas near the Turkish border. This would allow the local population and refugees to live in areas safely. The problem cannot be just tackled by keeping people in Turkey and providing limited financial assistance to them, Turkey underlined.

Kınık stated further that around half a million Syrians have voluntarily returned to their country in recent years.

In most of Syria, he said, "There is no humanitarian law and no respect for the laws of war or other measures protecting human dignity and rights."

But this is not the case in parts of northern Syria liberated by Turkey from terrorists, he explained, as there is a measure of safety and stability there.

"After some military intervention from the Turkish side, and providing some safe, secure spaces for them, almost half a million migrants returned to their own homes," Kınık said, referring to Turkey's cross-border military operations in northern Syria.

Since 2016, Turkey has launched a trio of successful anti-terror operations across its border in northern Syria to prevent the formation of a terror corridor and enable the peaceful settlement of residents: Euphrates Shield in 2016, Olive Branch in 2018, and Peace Spring 2019.

Stressing the public safety and authority in these parts of the country, Kınık explained that Kızılay is operating eight hospitals and dozens of medical centers there in collaboration with the Turkish Health Ministry.

"We have 3,000 medical staff working there," he added. "The Turkish Maarif Foundation and Turkish government provide financial support for the cost of running the schools there."

"So this atmosphere convinces people to get back to their homes, and we're encouraging people who are living in Turkey to voluntarily take up the process to return," he explained.