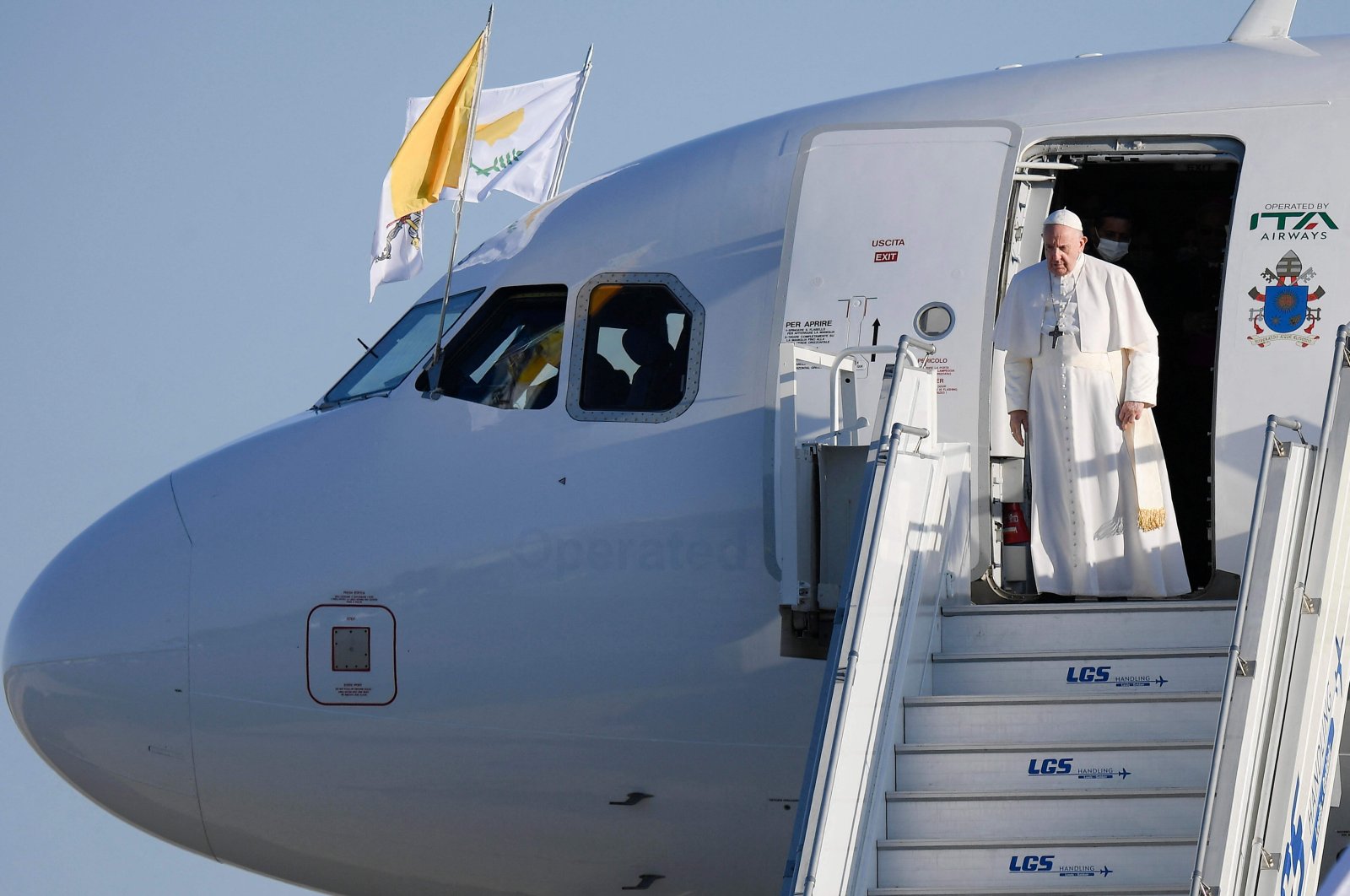 Pope Francis disembarks from the plane upon his arrival in the Greek Cypriot administration controlled city of Larnaca on the island of Cyprus, Dec. 2, 2021 (The Vatican Media handout photo via AFP)
by DAILY SABAH WITH AGENCIES Dec 02, 2021 5:30 pm
RECOMMENDED

The President of the Turkish Republic of Northern Cyprus (TRNC) Ersin Tatar on Thursday has invited Pope Francis, who is on a five-day trip to the Greek Cypriot administration and Greece, also to visit Turkish Cyprus.

In a written statement, Tatar voiced that the Greek Cypriot administration is using the Pope’s visit for political aims against Turkey and the TRNC.

"While this is new proof that the Greek Cypriot administration abuses religious beliefs, it is very regrettable,” he said and added that the fact Pope Francis is only visiting the Greek side is another point of regret.

“There are two different peoples in Cyprus and not only Christian Greeks but also Muslim Turks live in Cyprus. This is one of the fundamental realities of Cyprus,” he said.

Pope Francis landed at Larnaca Airport on the island of Cyprus on Thursday after a three-hour flight.

For the head of the Catholic Church, the focus of the trip to the eastern part of the Mediterranean is the refugee crisis. The division of Cyprus was also to be discussed.

The island of Cyprus has been mired in a decadeslong struggle between Greek and Turkish Cypriots, despite a series of diplomatic efforts by the United Nations to achieve a comprehensive settlement. Five decades of Cyprus talks have led nowhere.

On Friday evening, Francis will meet migrants in Lefkoşa (Nicosia). He is scheduled to take some of them to Rome later.

During the second part of the trip, the pontiff will travel to Lesbos. In 2016, he visited what was then the Moria refugee camp and brought some refugees with him on the plane to the Vatican.

The Eastern Mediterranean island of Cyprus has seen such a spike in migrant arrivals this year – a 38% increase in the first 10 months compared to all of last year – that it has formally asked the European Commission to let it stop processing asylum claims altogether.

In a message this week marking the International Organization of Migration’s 70th anniversary, Francis insisted that refugees are people deserving of dignity and denounced how their desperation is exploited, a message he has repeated in reference to the standoff at the EU’s border with Belarus.