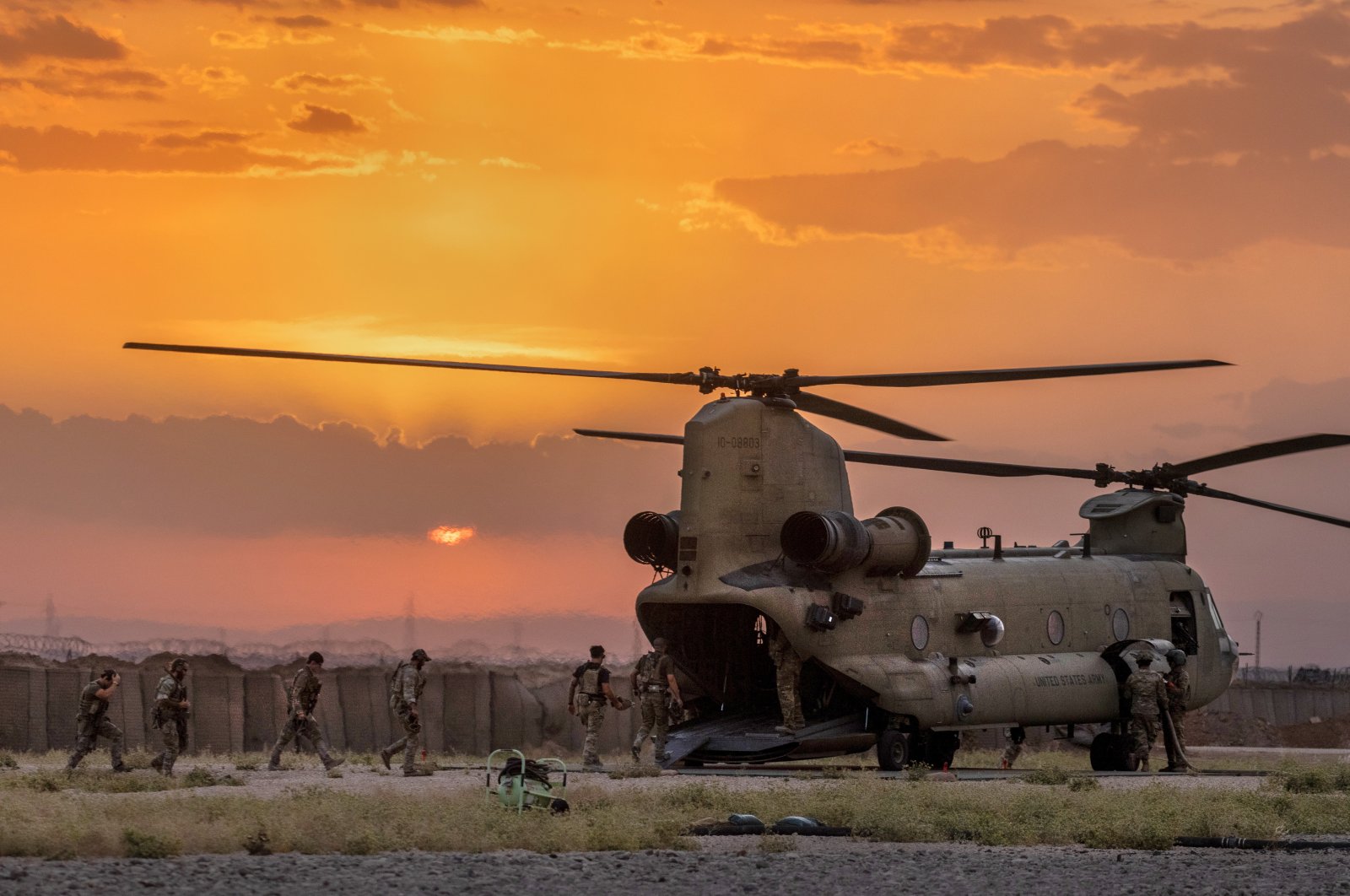 U.S. Army soldiers board a CH-47 Chinook helicopter while departing a remote combat outpost known as RLZ near the Turkish border in northeastern Syria, May 25, 2021. (Getty Images)
by DAILY SABAH WITH AA Jul 15, 2021 10:22 am
RECOMMENDED

Cooperation in Afghanistan to ensure the security and continued operational capacity of Kabul Hamid Karzai International Airport can have a positive effect on military-to-military ties between Ankara and Washington, Michael Doran, a senior fellow at the U.S.-based Hudson Institute stated.

In an interview with Anadolu Agency (AA), Doran commented on Turkish and American ties along with recent developments in Afghanistan from where the U.S. is scheduled to withdraw by the end of August.

Underlining that the military relationship was the very "bedrock" of ties, Doran said, "Since the United States started supporting the YPG, that relationship has really soured, and I think that the faster we can get back to strong military-to-military cooperation, the better it will be for both countries."

"The Turkish leadership has recognized that the United States is pulling back but it still has interests, and it realizes that Turkey has certain capabilities that it can bring to the fore which would be a great service to the United States and to the alliance," he said, adding it bodes well for the future of relations.

Turkey, whose forces in Afghanistan have always consisted of noncombatant troops, has offered to guard Kabul airport as questions remain on how security will be assured along major transport routes and at the airport, which is the main gateway to the capital Kabul. The security of the airport is crucial for the operation of diplomatic missions out of Afghanistan as Western forces pull out.

Doran said the U.S. should cut its relationship with the YPG, the Syrian branch of the PKK terrorist group.

"I personally have always thought that the partnership with the YPG was extremely short-sighted and, and frankly wrong because my view is that the YPG is the PKK," he said. "The United States is supporting the enemy, the most hated enemy of our closest ally, (it) doesn't make any sense."

"I think there's a growing awareness of that in the United States," he said.

Stressing that the U.S. administration has gotten itself into such a position, he said, "if it were up to me, personally, I would sever the relationship with the YPG and work with the Turks directly to achieve the outcomes that we need to achieve in Syria."

The senior expert said former U.S. President Barrack Obama's Iran policy took the U.S. into this situation – where Washington established ties with the YPG/PKK, claiming it needed the group but the partnership later somehow transformed into a strategical one with the YPG/PKK seizing territory and beginning to govern captured regions.

"You have to understand the strategic mindset of the Obama administration. The Obama administration was, in a stealthy way without admitting it to the American people across the board, in the Middle East, was aligning the United States with Iran," he said. "It did not want to support the opposition because Assad is Iran's closest ally," said Doran.

He noted that Obama, before the American public, felt obliged to fight the Daesh terrorist group, and he was trying to figure a way to achieve it without damaging relations with Iran.

Commenting on the complexity of the political terrain in the region, he noted that the Obama administration thought that working with the Turks to take care of the Daesh problem would harm ties with Iran and Russia because it would mean strengthening the opposition against Assad and making the Iranian nuclear deal an impossible task.

"And so, the United States adopted that position, but it never admitted it publicly, and a lot of people in Washington still don't understand that," he said.

Doran said Iranian proxies targeted U.S. forces in Iraq and Syria while President Joe Biden's administration was attempting to reach an agreement with Tehran, and this was a contradiction.

"This makes no sense. It's fanciful to believe that that the regime is going to ever cut a deal with the United States," he said. "And so, the proper thing to do is to work with our ally Turkey, with whom we have half a century of cooperation on strategic questions in order to stabilize that part of the world."