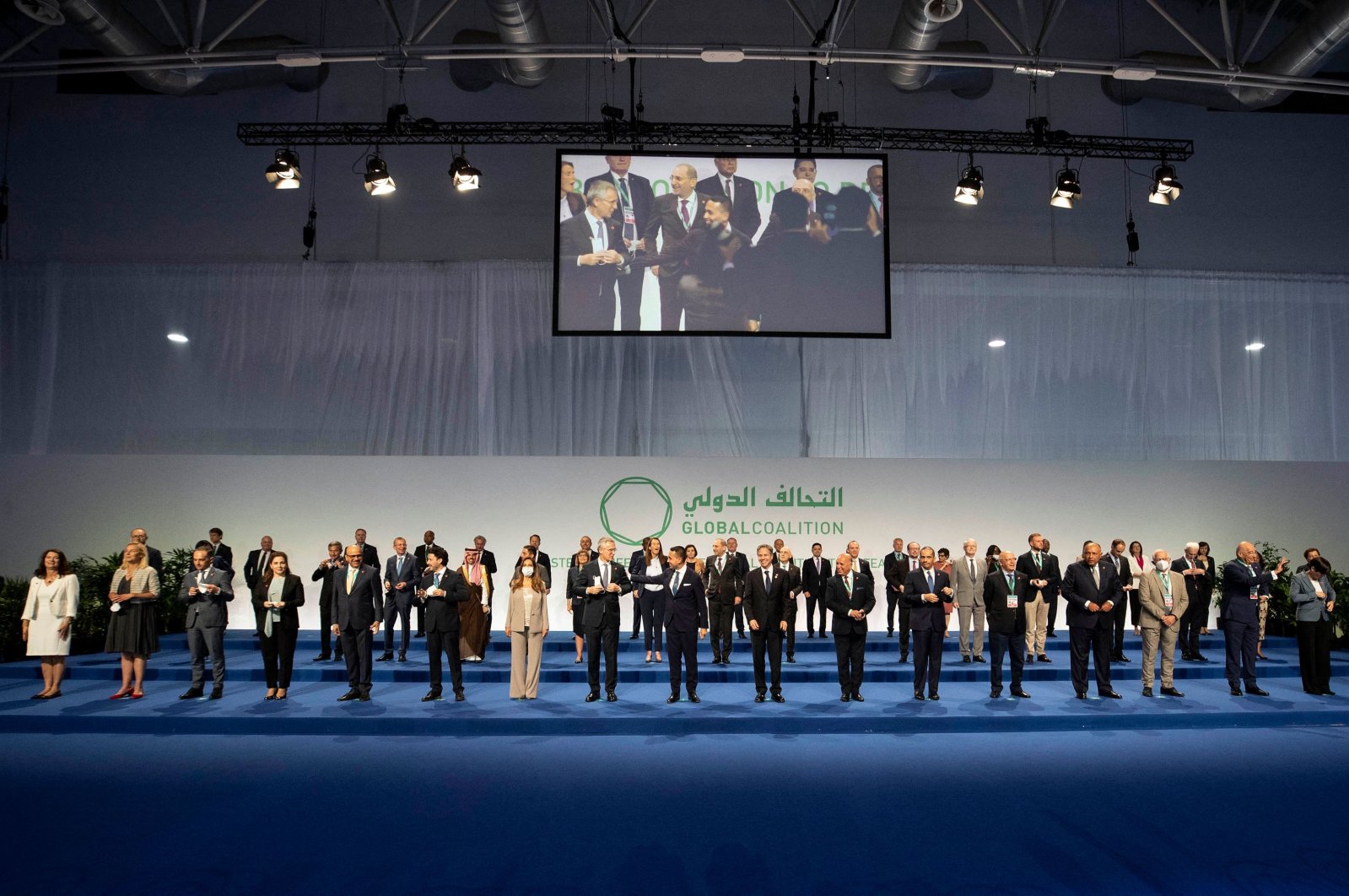 Ministers of the Global Coalition Against Daesh reaffirmed their determination to defeat terrorism not only in the Middle East but also in Africa on Monday. They also underlined the need to repatriate former fighters, warning they could not be held indefinitely in Syria.

The ministers, who reconvened in person after two years at the invitation of  Italian Foreign Minister Luigi Di Maio and U.S. Secretary of State Antony Blinken, issued a joint communique through which they reiterated their commitment to creating conditions for the lasting defeat of the Daesh terrorist group through a comprehensive, coordinated and multifaceted effort.

Blinken pressed allies to bring back citizens arrested overseas for joining Daesh. About 10,000 suspected Daesh fighters are being held in northern Syria.

"This situation is simply untenable. It just can't persist indefinitely," Blinken said. "The United States continues to urge countries – including coalition partners – to repatriate, rehabilitate and, where applicable, prosecute their citizens," he said.

France and Britain, two of the closest U.S. allies, have been holdouts against such calls, which were also made by former U.S. President Donald Trump's administration.

Both nations have experienced traumatic attacks and see little incentive and plenty of political cost to bringing back radicalized citizens who are already jailed overseas.

Blinken praised Italy as one of the few Western European nations to repatriate its citizens and also hailed efforts by Central Asian nations such as Kazakhstan, which he said had brought back 600 fighters and their family members and put them in rehabilitation programs.

In a joint statement, the coalition voiced "grave concern" over the plight of prisoners in Syria and said it was important to find "a comprehensive and long-term solution."

Since the beginning of the Syrian civil war in 2011, nearly 5,000 foreign fighters have traveled from the EU to conflict areas in Syria and Iraq, according to estimates by the European Union Agency for Law Enforcement Cooperation, better known as Europol.

Blinken said the U.S. was offering another $436 million, mostly through international organizations, to care for Syrians displaced in the brutal decadeold war. The aid includes efforts to support COVID-19 vaccinations.

The Central African Republic, Democratic Republic of Congo, Mauritania and Yemen were welcomed as new members of the coalition, the communique noted.

Emphasizing the protection of civilians as a priority and affirming that international law must be upheld under all circumstances, the ministers underlined that cooperation across all coalition lines of effort should be strengthened to prevent the terrorist group's core in Syria and Iraq and its affiliates and networks around the world, from reconstituting in any territorial enclave.

"Daesh no longer controls territory and nearly eight million people have been freed from its control in Iraq and Syria, but the threat remains. The resumption of Daesh activities and its ability to rebuild its networks and capabilities to target security forces and civilians in areas where the coalition is not active requires strong vigilance and coordinated action," the ministers said.

The ministers praised Iraq's efforts to counter the terror group's remnants to prevent its resurgence and the increased capacity of the Iraqi forces combatting Daesh, however, highlighted the importance of coordinated efforts in the struggle against the terrorist group.

"The coalition operates in Iraq at the request of the government of Iraq in full respect of Iraq's unity, sovereignty and territorial integrity and to the benefit of the Iraqi people," the ministers said. "The ministers firmly condemn the continuing attacks against coalition personnel and convoys and diplomatic facilities, emphasizing the importance of the government of Iraq in protecting coalition assets."

The ministers reiterated that they stand with the Syrian people for a lasting political settlement in accordance with U.N. Security Council Resolution 2254.

"The coalition continues to support inclusive local recovery and stabilization in areas liberated from Daesh and reconciliation and reintegration efforts to foster conditions conducive to a Syria-wide political resolution to the conflict under the parameters of U.N. Security Council Resolution 2254," the ministers asserted.

Turkey, on the other side, has been underlining that one terrorist group cannot be used to fight another, singling out the YPG/PKK in northern Syria, near Turkey's border, which Washington has been backing under the pretext of fighting Daesh.

Ankara has long objected to the U.S.' support for the YPG, the Syrian offshoot of the PKK terrorist organization, a group that poses a threat to Turkey and that terrorizes local people, destroying their homes and forcing them to flee.

Stepping up efforts in Africa

Although Daesh has lost almost all of its territory in Syria and Iraq, where it once ran a vast self-styled caliphate, the terrorists are exerting growing force in Africa including in the Sahel, where France is winding down a military campaign, and in Mozambique.

There was little talk of new military actions, but Blinken said the coalition would put a new emphasis on Africa in efforts to cut off financing.

"We must step up the action undertaken by the coalition, not by shifting our focus but by increasing the regions in which we operate – not just the Middle East but Africa," Di Maio said.

German Foreign Minister Heiko Maas said the coalition "can and must work more closely together with African countries, and I think the participants here are in agreement about that."

Blinken also announced that the U.S. was designating Ousmane Illiassou Djibo, a Niger-born Daesh leader based in Mali, as a "specially designated global terrorist," making any transactions with him a crime under U.S. law.