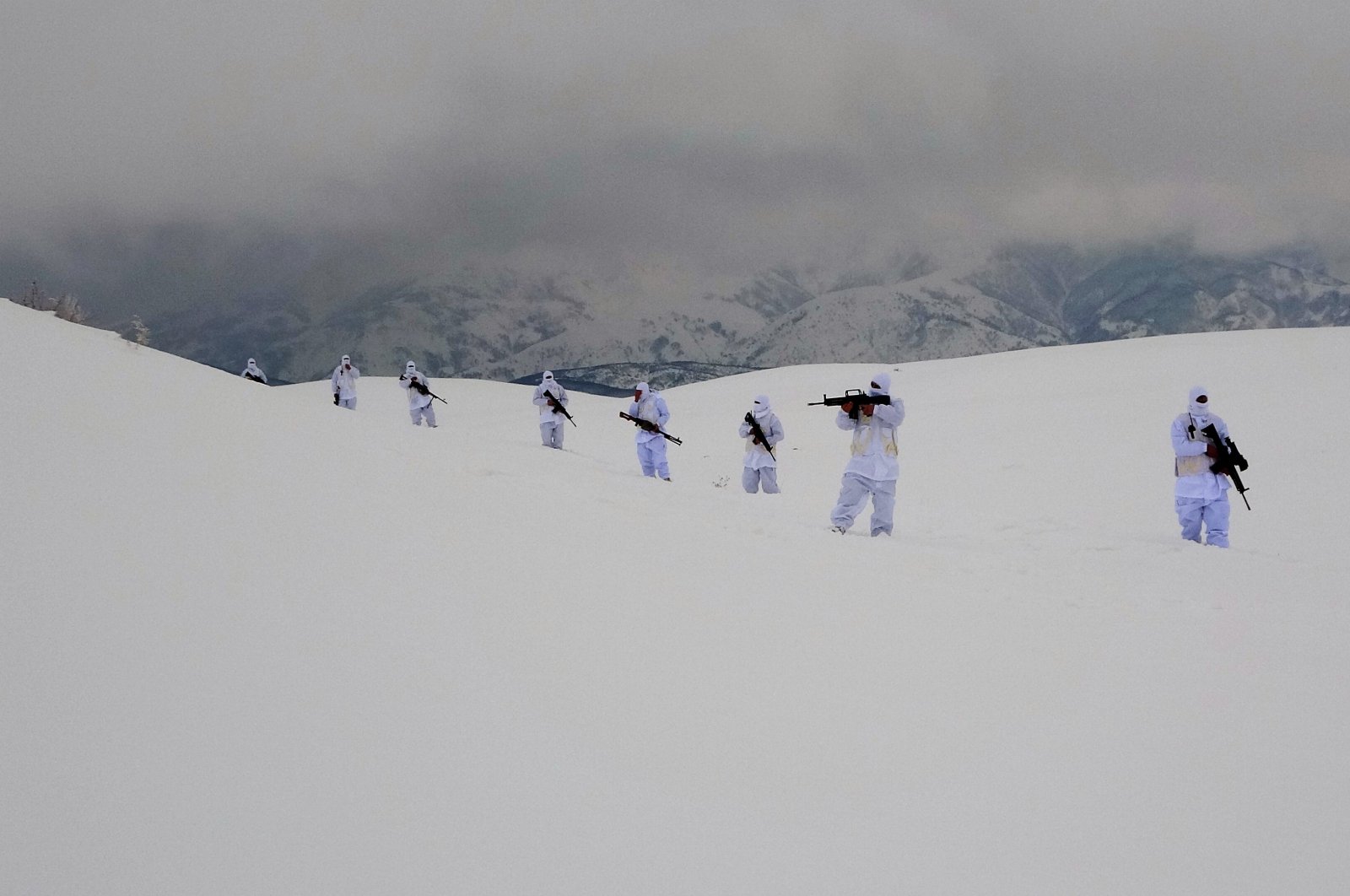 The Alparslan and Kılıçlar teams of the Gendarmerie Command carry out operations against the PKK terrorist organization in the Şenyayla region of southeastern Turkey, Feb. 1, 2021. (IHA Photo)
by Daily Sabah with IHA Feb 01, 2021 1:30 pm
RECOMMENDED

The Alparslan and Kılıçlar teams of the Gendarmerie Command continue to carry out successful operations against the PKK terrorist organization in the Şenyayla region located between the eastern provinces of Muş and Bingöl and southeastern Diyarbakır province despite harsh winter conditions.

The Alparslan team, named after the Sultan of the Seljuk Empire who was a fearless and skillful fighter as well as the Kılıçlar team, named after the Turkish word "swords," of the Muş provincial gendarmerie command conducted their operations at an altitude of 1,800 meters (5,906 feet) to eliminate terrorists and their hideouts amid meters of snow.

Command Sgt. Maj. Kurtuluş Yurdunmalı told journalists Monday that security forces fulfill their duties in all conditions whether summer or winter to ensure the safety of the region and the people.

Thanks to national arms and equipment security, Turkish forces gained the ability to work in all kinds of conditions, Yurdunmalı said, adding, “The operations continue 24/7 in all weather conditions from the ground and air.”

Turkish security forces regularly conduct counterterrorism operations in the eastern and southeastern provinces, where the PKK has attempted to establish a strong presence. As the Turkish security forces carry out counterterrorism operations in Turkey and outside of its borders, many terrorists continue to surrender voluntarily. Many surrendering terrorists say others cannot do so out of fear for their lives due to threats by high-ranking terrorist members, despite the harassment, rape and torture experienced in PKK camps.

Security forces have adopted a strategy of "ending terrorism at its root" and "attack rather than defend" for operations across the country.

On the other hand, the dissolution of the PKK has accelerated due to Turkey's successful counterterrorism operations and strategies both at home and abroad.

According to the Interior Ministry, a total of 321 terrorists surrendered in 2020 while five terrorists laid down their arms and surrendered so far this year.

Apart from Turkey's counterterrorism operations, thanks to the pressure from the Diyarbakır families' sit-in protest outside the offices of the opposition Peoples' Democratic Party (HDP) in Diyarbakir province, terrorists have been surrendering to Turkish justice officials, which has led to happy reunions with their families.

Security forces use persuasive techniques to save children who have been kidnapped and deceived by the PKK while they also collaborate with the families that have been protesting for over a year.

"One day, my son left the house to go to work and I have not seen him since," Öztürk said, calling on her son to return.