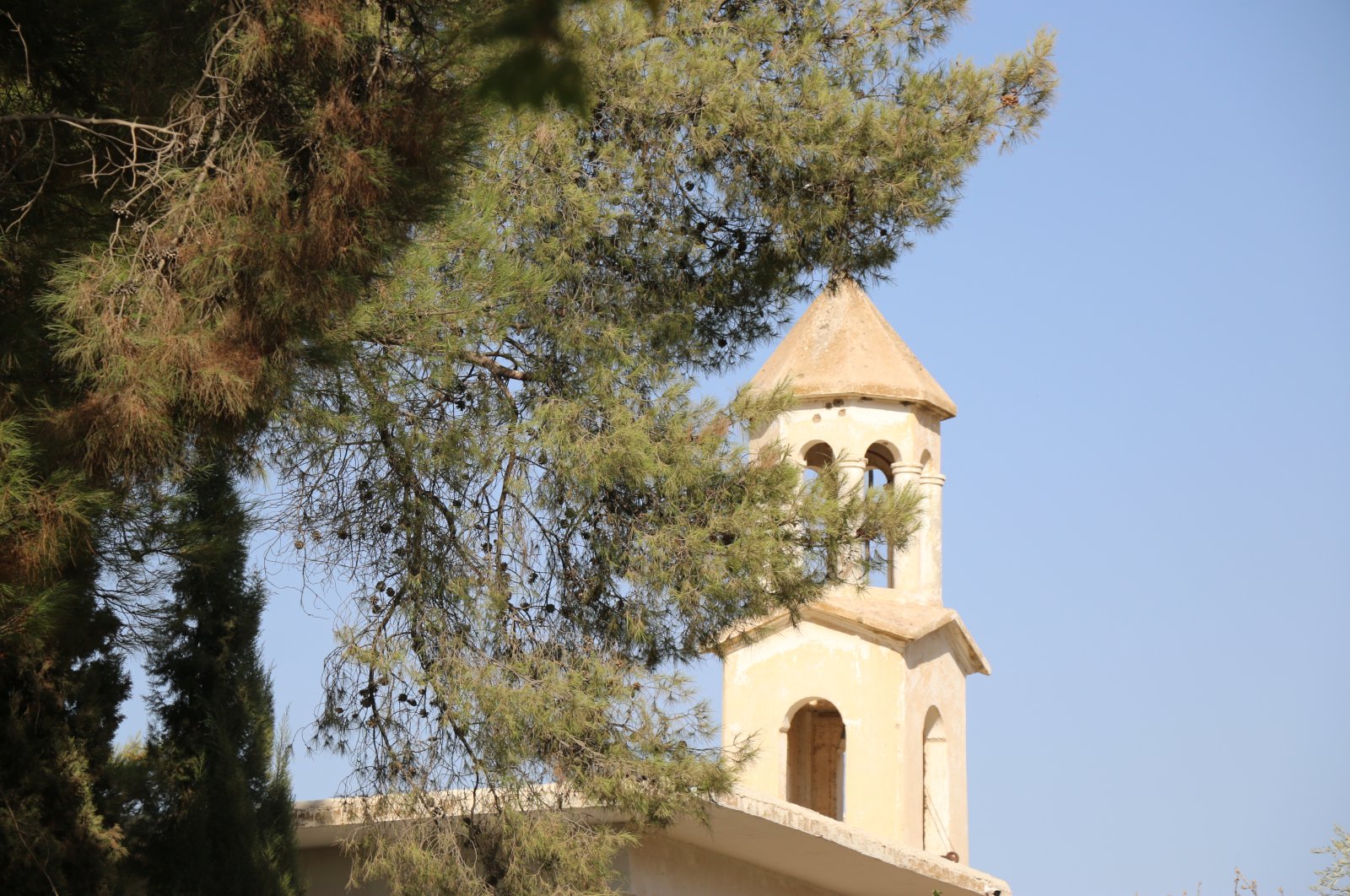 Christians who had to leave their homes after the PKK terrorist group's U.S.-backed Syrian branch YPG occupied northern Syria's Ras al-Ain district, now live in a peaceful environment after Turkey's Operation Peace Spring cleared the region of terrorists and provided secure conditions for different ethnic and religious groups to live together.

When the terrorist organization YPG/PKK invaded the Ras al-Ain district in Syria, across from the Ceylanpınar district of Turkey's southeastern border province Şanlıurfa, in July 2013, the Melki brothers, from the minority Christian community living in the district, suffered the most.

After the invasion, the Melki brothers took refuge in Turkey, leaving their sisters behind.

The brothers, who fled the persecution of the YPG/PKK, started to live in a tent camp set up for Syrian refugees in the Midyat district of southeastern Mardin province.

Naum, 56, returned to Ras al-Ain district in May 2016 after YPG/PKK terrorists abducted his sisters and stole their home. However, the terrorist organization detained Naum for about three months.

After the Ras al-Ain district was liberated from terrorism in October 2019, 58-year-old Ziyad Melki returned to his home in the district from Turkey, where he had stayed for six years.

Speaking to Anadolu Agency (AA), Naum said: "The Turkish brothers welcomed us. From the time we entered the district, they helped us with whatever we needed. AFAD (Turkey's Disaster and Emergency Management Authority) and Kızılay (Turkish Red Crescent) have always helped us."

Stating that some Christian clergy living in Turkey made offers to send them to Europe, Melki said: "We did not go to Europe because we have rights and land. We refused. We always dreamed of returning to Ras al-Ain one day. Even though there was a tent life, our Turkish brothers have always been good to us."

Naum Melki said that just before the agreement signed between the U.S. and Turkey on Oct. 17, 2019, he was detained by YPG/PKK terrorists for 43 days and returned to Ras al-Ain after he was released.

Expressing that he was very happy because the district was cleared of YPG/PKK terrorists, Melki said: "When the Turkish army-backed Syrian National Army (SNA) liberated our district, I kissed the land, the SNA group that saved me, the church and my house."

In 2019, Turkey carried out Operation Peace Spring against the PKK terrorist group's Syrian branch, the YPG, which is mainly backed by the U.S. in northern Syria, to prevent a terror corridor from being created along its southern border, as well as to bring peace and tranquility to the region.

The operation, conducted in line with the country's right to self-defense borne out of international law and United Nations Security Council resolutions, aimed to establish a terrorism-free safe zone for Syrians to return to the area east of the Euphrates, which was then controlled by the U.S.-backed YPG/PKK terrorists.

After the completion of the operation, the Turkish Armed Forces (TSK) and the Syrian National Army (SNA) units focused on ensuring the security of the region and creating the necessary conditions for the return of civilians displaced by terrorism. Thanks to Turkey's intense contributions in the fields of health, education and service to return life to normal, the population of the region is now around 250,000.

Locals living in areas held by the YPG have long suffered from its atrocities as the terrorist organization has a notorious record of human rights abuses, ranging from kidnappings, recruitment of child soldiers, torture, ethnic cleansing and forced displacement.

The atmosphere of trust and stability provided in the Tal Abyad and Ras al-Ain districts in the Operation Peace Spring region distanced both districts from the chaos of the war. The commercial activity at the open customs gates with Turkey also plays an important role in the development of the region.

Melki stated that the TSK gives great priority to the maintenance and repair of all churches in the district, and that they install cameras for the security of their churches.

"What Turkey did for the mosques in the district, it did the same for the churches here." Naum Melki said adding: "The Turkish Armed Forces equipped the interior and exterior of the Mary Mecdeliyya Church with cameras. They also installed cameras, maintained, repaired and illuminated the Martuma Resul Church and the Mar Agob Church of our Armenian brothers. Our brothers in SNA also provided us with generators for the lighting of the churches.

"We live in brotherhood and harmony with other ethnic groups in the district. We often hear that Western society worries about the existence of Christians, but we have never seen them here. On the contrary, we have seen the violations of the terrorist organization YPG, which is supported by the United States and talks about the so-called brotherhood of peoples," he added.

Ziyad Melki, 58, a member of the Ras al-Ain local council, said that Arab, Chechen, Turkmen and all other ethnic and religious groups in the district lead a brotherly and harmonious life.

Emphasizing that the TSK and SNA protect the churches, Melki said: "As a member of the Christian community, we fulfill our religious obligations in the same way as other ethnicities live their religious freedom fluently and unhindered here."

Ziyad Melki thanked Turkey and SNA for clearing the region of terrorists.

Muhammed Nura, one of the SNA commanders in the district, said that they made great efforts to make Ras al-Ain a safe district.