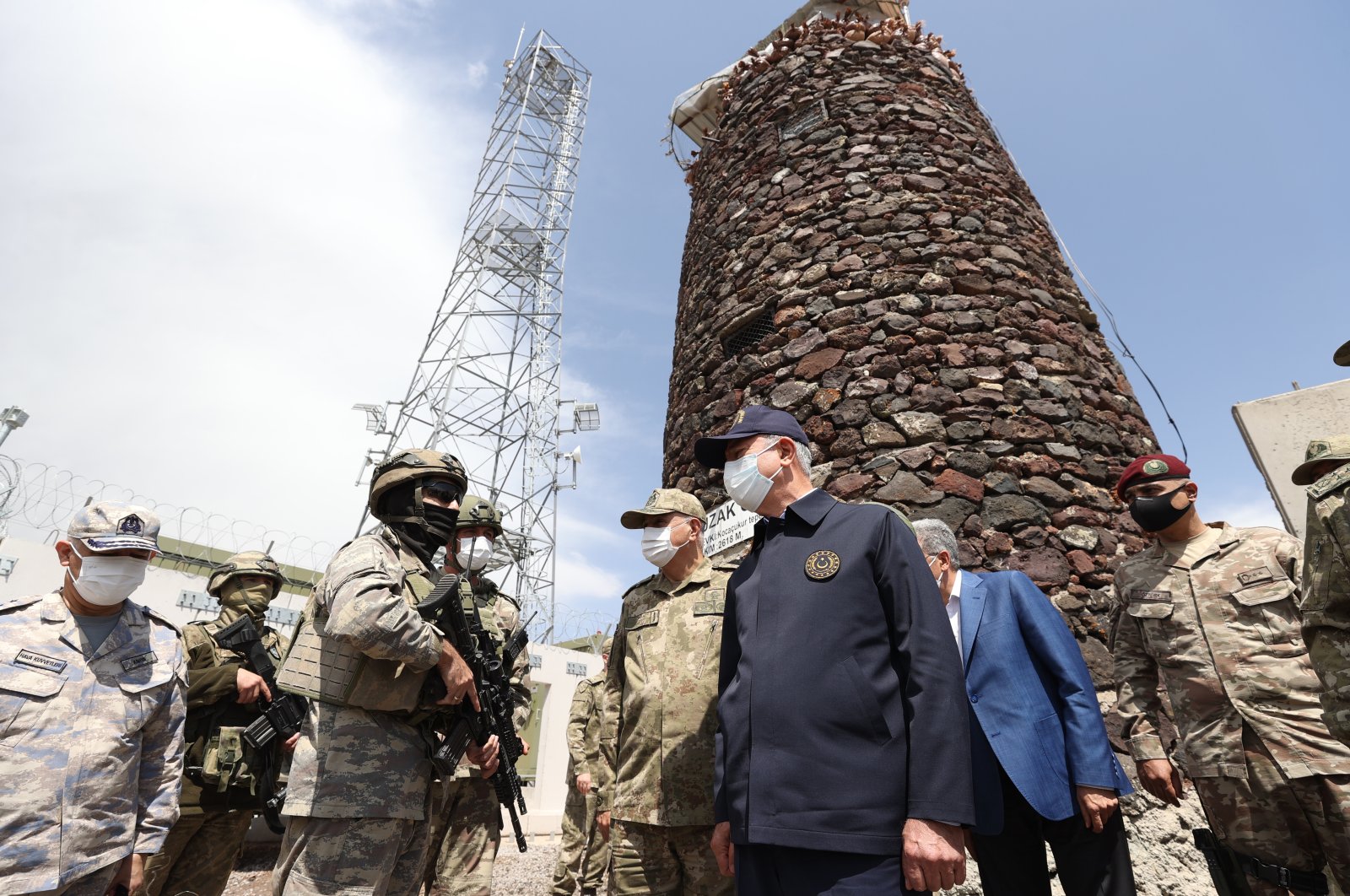 Speaking on the increase of Afghan refugees, Akar said border control measures have increased significantly. "On the first line, there is border security, land forces and in the deeper area gendarmerie forces, while the inner line includes police special forces. Therefore, we have once again observed that the footage being shared does not reflect reality."

They visited the Kocaçukur Tepe observation post at an altitude of 2,618 meters (8,589 feet). Soldiers at the post told Akar: "Neither terrorists nor illegal immigrants can enter our country while we are here."

The defense minister and the commanders later visited the Hangedik Base Area at an altitude of 2,430 meters to continue their inspections in the region.

The United Nations recently estimated half of Afghanistan's 39 million people are in need of aid and called on the international community to maintain financial support for the country.

The entrenching work, as well as the construction of a modular wall and observation tower to prevent illegal activity, are underway on the Turkish-Iranian border.

The mounting process in the first 5-kilometer portion of the wall, which seeks to prevent the entrance of irregular migrants into Turkey through the Iranian border, has been completed.

Gendarmerie forces are clearing the border of mines for construction to be conducted safely.

To put an end to the illegal passages through the border, a 110-kilometer-long trench of 4 meters in depth and width has been dug and secured with barbed wire.

While nine Turkish battalions have been serving at 44 posts to ensure security, a battalion, two expeditions and five divisions have been deployed in the region along with 35 task forces and 750 special operation police in armored vehicles.

Drones and helicopters are also used by security forces to keep the region under control.

So far, security forces have prevented the passage of 69,156 irregular migrants and arrested 904 suspects who allegedly organized the illegal passages.

Turkey is not a pit stop for migrants, President Recep Tayyip Erdoğan said last week and added that the country is taking the necessary steps to avert an irregular migration crisis due to the situation in Afghanistan.

In a live interview with private broadcasters CNN Turk and Kanal D, Erdoğan underlined that Turkey is not a stop on a journey, adding that considering all matters, “we will take steps accordingly.”

The Turkish president also denied that there was an influx of irregular migrants crossing Turkey's borders, as is currently being "exaggerated on social media."

On the other side, over 37,000 irregular migrants have been sent to the repatriation centers of local migration offices across Turkey over the past seven months, according to the metropolis Istanbul's migration authority on Saturday.

As part of efforts to prevent the flow of irregular migration, Turkey in 2021 has sent 37,072 irregular migrants to repatriation centers located across 22 provinces.

The Istanbul Migration Authority said 12,893 of the foreigners subject to deportation were from Afghanistan, 5,840 from Pakistan and 18,339 from other nationalities.