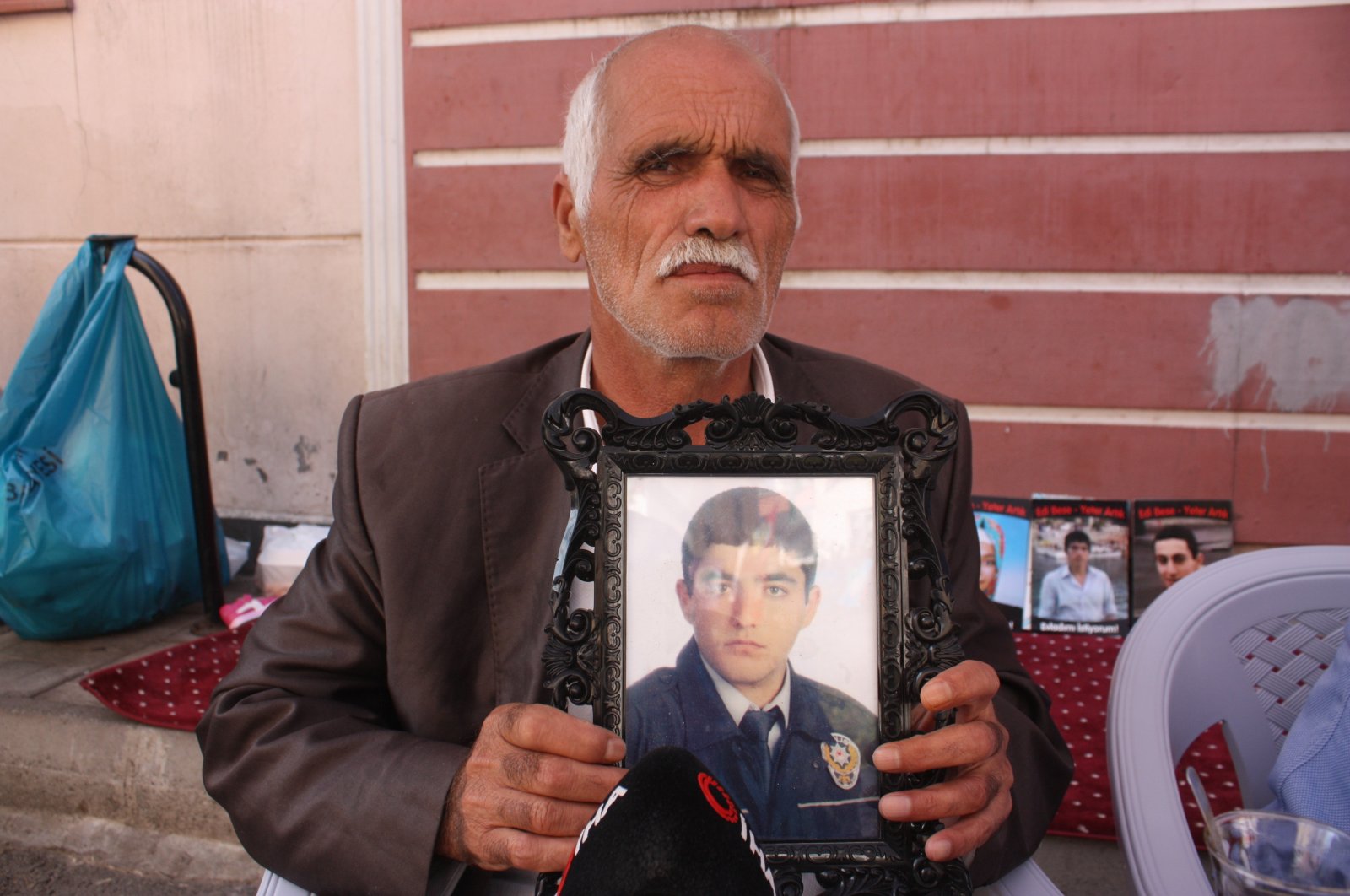 Şehmus Kaya holds a picture of his son Vedat during a sit-in protest against the PKK in southeastern Diyarbakır province, Turkey, Oct. 22, 2019. (İHA Photo)
by DAILY SABAH WITH AA Mar 02, 2021 2:36 pm
RECOMMENDED

The father of one of the victims executed by the PKK in a cave in northern Iraq's Gara region last month is still haunted by the gruesome act of terror, saying it revealed the PKK's true colors.

Şehmus Kaya, 63, who identified his deceased son in eastern Malatya province shortly after the executions, said the PKK starved his son and the other hostages, saying his son lost a significant amount of weight over the course of six years.

"He was skinny. My Vedat was 85 kilograms but dropped to just 45-50 kilograms. They [PKK] did not even give him bread, so that was it. I looked all around my martyred son. He was thin, really thin. I cannot put these feelings into words," he said as quoted by the Anadolu Agency (AA).

On Feb. 13, 2021, PKK terrorists executed 13 abducted Turkish citizens in a cave in northern Iraq during a Turkish counterterrorism operation. In the operation, 48 terrorists were killed and two were captured alive.

Defense Minister Hulusi Akar had stressed that the operation was launched in self-defense and per international law to prevent the PKK from reestablishing positions, often used to carry out cross-border attacks that target military personnel and civilians within Turkey.

Turkey has long stressed that it will not tolerate national security threats and has called on Iraqi officials to take the necessary steps to eliminate the terrorists. Ankara has previously warned that if the expected steps are not taken, it will not shy from targeting the group.

Turkish police officer Vedat Kaya was abducted by the terrorist group on July 24, 2015, in the Lice district of Turkey's southeastern Diyarbakır while traveling with his family. Kaya was taken to the mountains of northern Iraq together with other abductees and on to the Gara region, where they were shot at from close range by the terrorists in a cave complex.

He continued: "A human being, six years ... Think about it ... You (PKK) abduct by force of a gun and keep him in a cave for six years ... They did not feed (hostages) to the extent that even their bones had thinned. All skin and bones, no creature can do such a thing ... I do not know how to describe this ..."

The memory of having to identify his son ahead of the autopsy still haunts the father, who says he still sees the image of his child's dead body every night when he closes his eyes to go to sleep. He said he hopes no parent ever finds themself in his position for many could not overcome the degree of suffering, adding that this kind of pain will never heal.

While many terror-affiliated media outlets quickly rushed to disseminate false information about the events that took place, alleging that Turkish warplanes were responsible for the victim's deaths, the father confirmed that his son and the others had each been killed by a single bullet.

"They (terror affiliates) say war jets of Turkey carried out a bombardment ... This is a lie. It has no truth in it. I myself checked the body bag along with two officers. His mother and brother were there as well," he said.

"(Turkish) state is not to blame here. It was looking for them (hostages) since the first day of the abduction. The state did what was needed ... If there had been a bombardment, the corpses would have been torn apart. My son was martyred with a single bullet."

He went on to say that he received phone calls from abroad roughly two days before the Turkish operation in the region and that the callers attempted to feed him misinformation to manipulate him into making anti-Turkey statements.

Receiving the news of the loss of a child is a traumatic event for any caring parent and Kaya was no exception, but the father had been preparing himself for the worst over the past six years, claiming his son was a "martyr in his father's mind" since the day he was abducted. He was aware of how cruel the PKK could be over the past decades.

"The PKK has nothing to do with Kurds," he said, adding that people of Kurdish origin suffered the most at the hands of the PKK, which he called a proxy organization working for the benefit of anyone except the Kurds. He added that the terrorist group forcibly recruited the sons and daughters of Kurdish families, imposed its will on the people and executed anyone who objected to its policies.

While the fate of his child still pains him to his core, the father is proud that his son served as a Turkish police officer with honor, refusing to bow down to the terrorist group. "I am proud of my son, I wish things were different, but he will always live in our hearts," he said.

Kaya had also joined the ongoing sit-in protest outside the pro-PKK Peoples' Democratic Party (HDP) office in southeastern Diyarbakir province. It was first launched on Sept. 3, 2019, by three mothers claiming the PKK forcibly recruited their children. Hundreds of people have since joined the sit-in protest.