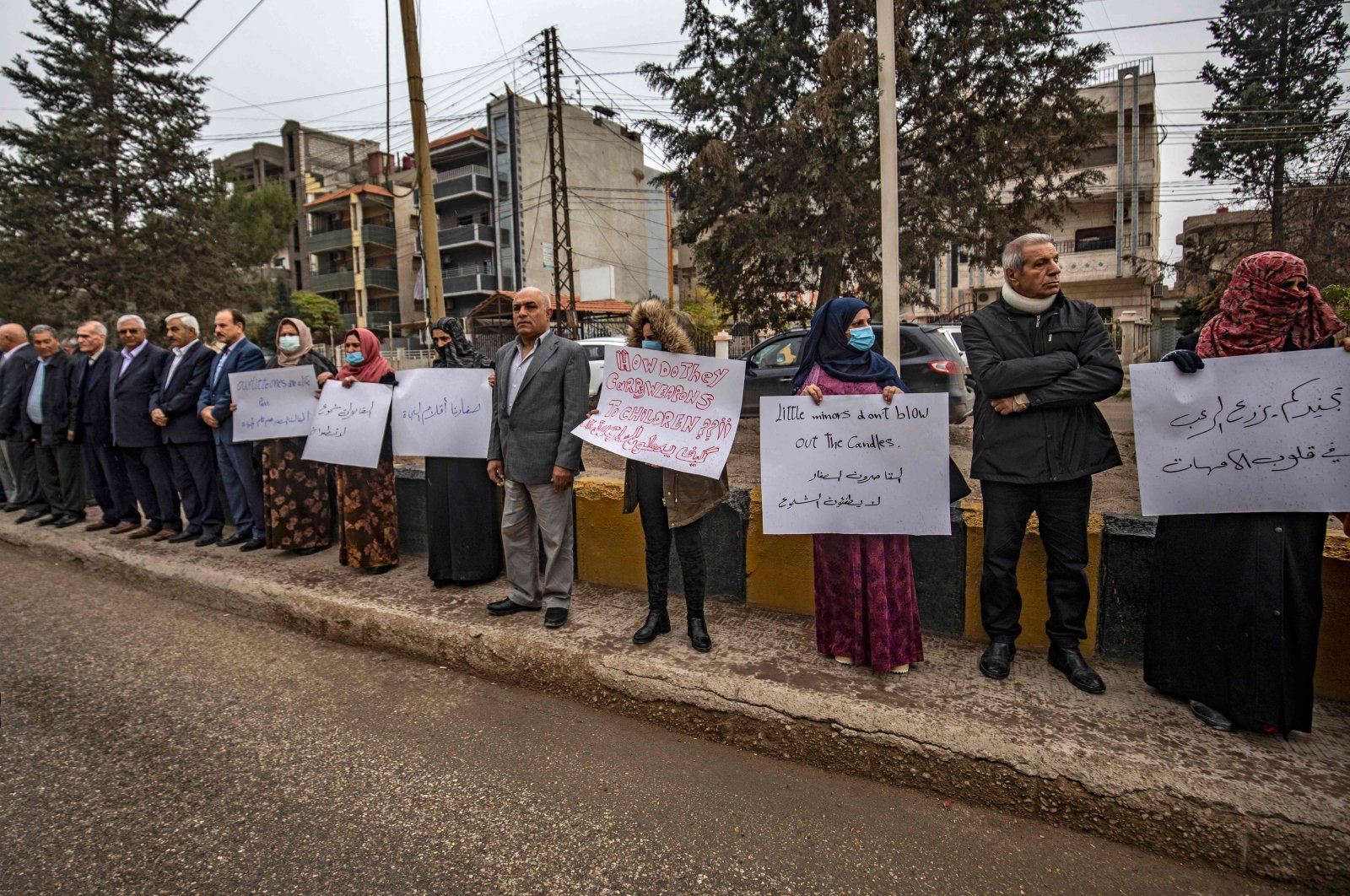 Kurdish parents demonstrate outside a U.N. building, calling on authorities to help release young girls they say were abducted and recruited into fighting by YPG/PKK, in the northeast city of Qamishli on Nov. 28, 2021. (AFP Photo)
by DAILY SABAH WITH AGENCIES Nov 29, 2021 8:58 am
RECOMMENDED

Parents of children who were kidnapped by the PKK’s Syrian offshoot YPG staged a protest in front of the United Nations headquarters in Qamishli, northeastern Syria, according to footage shared on Twitter.

Nearly 30 people gathered outside the U.N. headquarters to demand action, after several children, reportedly girls, were forcefully recruited by the YPG terrorists, which are primarily backed by the United States under the guise of fight against Daesh.

The protesters carried banners saying: “Bring back our children” and “Child recruitment sows panic in the heart of mothers.”

Mohammad Sharif said his 16-year-old daughter had been missing for almost a week.

“I want my daughter to come back home,” he told Agence Presse-France (AFP), adding that he believes she could be with the Women’s Protections Units (YPJ), the terrorist YPG’s women’s branch.

Balqis Hussein, 45, said her daughter had been missing for eight days.

She said she didn’t know if her child had been abducted by the YPG or joined voluntarily.

“We fear for the future of our children, they should not be recruited or made to hold weapons,” she said.

A United Nations report stated that the YPG has been recruiting children to fight among its ranks, adding that the organization has enlisted at least 400 children in the past two years.

According to the report, which documented violations toward children in Syria between July 2018 and June 2020, the YPG have continued to use children as fighters and store ammunition in schools. It pointed out the 236 attacks on schools and protected persons, of which 33 occurred in the second half of 2018, 154 in 2019 and 49 in the first half of 2020. During the incidents, members of staff were killed, maimed or arrested, and 133 children were killed or injured while at school.

In June 2019, YPG terrorists signed a joint action plan with the U.N. to end and prevent child recruitment, but since its signing, the U.N. has confirmed at least 160 cases.

Turkey strongly opposes the YPG's presence in northern Syria, which has been a major sticking point in strained Ankara-Washington relations. The U.S. has provided military training and thousands of truckloads of weaponry to the YPG, despite its NATO ally's security concerns.