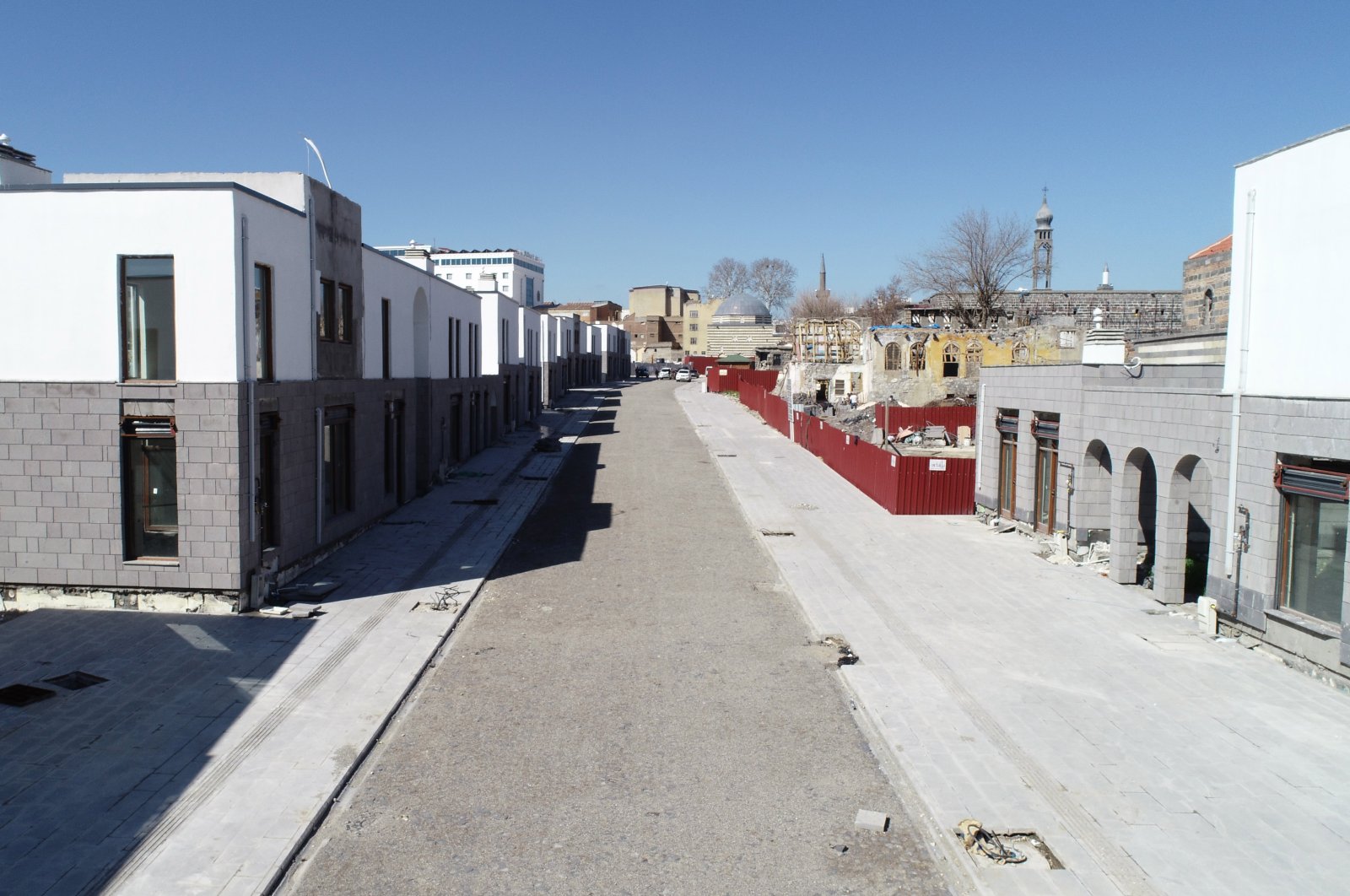 Diyarbakır's Sur district is rising from the ashes following the elimination of ruins left by PKK terrorists, enabling the reconstruction of the district with multiple state initiatives.

PKK terrorists burned and destroyed many areas by digging trenches in 2015-2016 in the central Sur district, in addition to mosques, churches and historical places, it rendered thousands of houses unusable. After the security forces cleared the districts from terrorists through their operations, work was started for the reconstruction of the district.

Speaking to Demiroren News Agency (DHA), Sur District Governor and Deputy Mayor Abdullah Çiftçi stated that more than 7,000 residences and an area inhabited by 21,000 people were destroyed due to the trenches and said: "We aim to host 5 million tourists with the completion of the restructuring in Sur and the opening of new areas."

A curfew was declared in Fatihpaşa, Hasırlı, Dabanoğlu, Savaş, Cevatpaşa and Cemal Yılmaz in Sur at the time in order to fill up the ditches, remove barricades and eliminate PKK terrorists in the region. After the ban, with the participation of gendarmerie forces, police special operations teams and security guards, an operation was organized. As the operation ended on March 9, 2016, 279 PKK members were killed, 206 barricades were removed, seven ditches were filled, 365 hand-made explosives were destroyed, 504 guns and 48,048 ammunition belonging to these weapons were seized. Many historical sites and houses were destroyed by PKK terrorists during the digging.

Projects have been implemented for those who were displaced by the destruction of thousands of houses due to the trenches dug up by the terrorists and for the restoration of Sur. While the Housing Development Administration of Turkey (TOKI) built new residences in some residential areas of the city for those whose homes were destroyed by PKK terrorists, a new zoning plan was prepared for Sur and both restoration and construction works were initiated.

"After the pit actions in 2015, our six neighborhoods in Sur were almost completely destroyed. In these neighborhoods, more than 7,000 residences and areas where 21,000 citizens lived were unfortunately destroyed. Since the end of the conflict process, under the leadership of our president and under the coordination of the Ministry of Environment and Urbanization. In accordance with the conservation plan and with the permission of the conservation boards, a reconstruction project was initiated in Sur. At this point, 506 new houses were built, completely detached and in the style of Diyarbakır houses with courtyards," Çiftçi said.

He continued by saying that: "There are 349 registered buildings that were destroyed and damaged during this conflict in the district. These are civilians buildings. Restorations of these civil registered buildings have also been started by the Ministry of Environment and Urbanization and TOKI. With the new structures and the structures to be restored, the entire area will be rebuilt. "

"There are also four churches among them. The most famous of these churches is Surp Giragos Church. Previously, the Armenian Protestant and Armenian Catholic churches. The Chaldean and Surp Giragos churches will also be ready toward the end of this year and will be in a position to serve their congregations."

Stating that they have been carrying out studies in accordance with Diyarbakır's historical architecture for the area where there was unplanned construction before, Çiftçi said:

"At the moment, the landscape project has been completed by the Ministry of Environment and Urbanization and the tender phase has started. Previously, the buildings in Içkale were destroyed, the ruins around the Prophet Solomon were removed. The houses there were expropriated and now, an area of ​​156 acres serves Diyarbakır as the Millet Garden. The new buildings have already been completed, a significant part of them has come to the stage of being handed over to the beneficiaries. Three hundred of our citizens have signed a contract at the point of receiving these residences. We expect other citizens to sign the contract. We aim to start the delivery processes of these residences in Sur in the next two months, and we expect a partial opening in Sur in the month of Ramadan. We aim to mobilize these programs."

Çiftçi further stated that they aim to attract 5 million tourists to the city after the restoration of historical sites and the completion of the new buildings, and said, "With a completely new vision, we will return 5 million tourists to Diyarbakır, which is our target, in a way it will become the center of attraction again that Sur had begun to lose as a trade and tourism center. When it was completed, a revival movement started under the leadership of our esteemed governor, with its cafes, social facilities, hotels, the Millet Garden and the walls, and the restoration processes continue on the walls of the district."

In its more than 40-year terror campaign against Turkey, the PKK, listed as a terrorist organization by Turkey, the U.S. and the EU, has been responsible for the death of some 40,000 people.