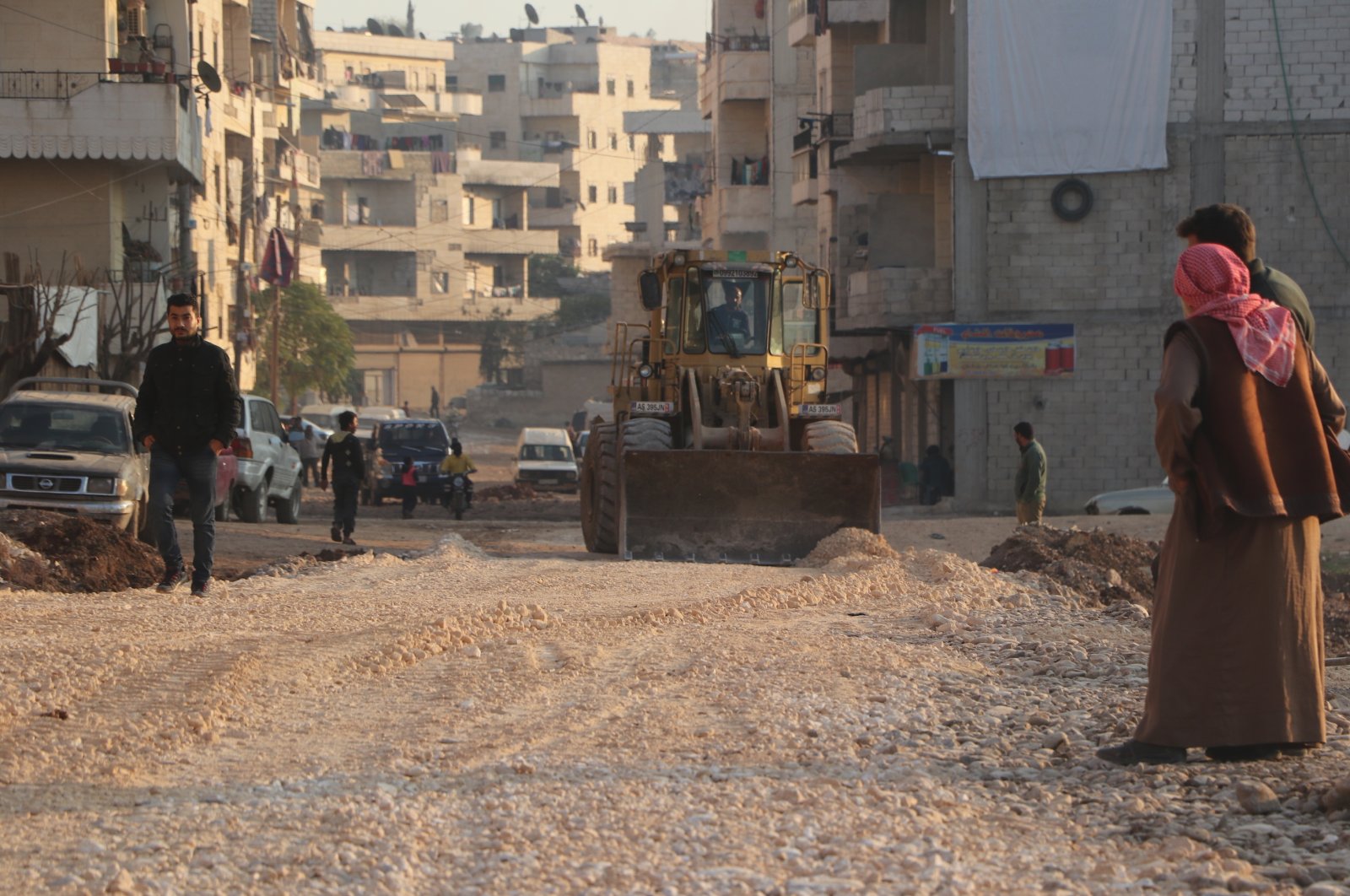 Launched on Jan. 20, 2018, to clear northern Syria's Afrin from terror elements, Operation Olive Branch has brought security and stability to the region

Three years have passed since Turkey launched its cross-border anti-terror Operation Olive Branch to clear northern Syria’s Afrin district from terror groups. Since then, local people say they are satisfied with the secure and stable environment created as a result of the operation.

"Civilians continue their lives peacefully and happily. The district has reached peace and welfare," Rashid said.

He added that Turkey has not left Afrin and its people alone.

Mohammed Abboud, a civilian living in Afrin, said that they started to feel safe after the town was cleared of the PKK terror group's Syrian branch YPG terrorists.

"We got rid of the terror group's forceful recruitment. The group made its own curriculum compulsory in schools and did not allow any social activities. We feel now that we are free."

He added that nearly 30 charity organizations conduct activities in the district, and all the needs of the local people are met.

Lokman Abu Zir, a Kurdish local in the town, stated that local councils do their best to serve people and support daily life, adding: "During the process, the most satisfying developments happened in the fields of education and health. Our children had the chance to study at the education faculty opened by Gaziantep University. Our schools were reconstructed and became available for education again. We sincerely thank Turkey for its support to us."

Another Kurdish citizen, Azad Osman, recalled that the YPG forcefully recruited many young people before the operation and said: "The terror group planted nearly 10,000 mines in areas where civilians frequently used. These mines caused many civilians to lose their lives."

He added that the YPG committed crimes against the local people: "The terror group oppressed the Kurdish people. They caused the Kurd-Arab discrimination. Many people were forced to flee the region."

The operation was launched on Jan. 20, 2018, in cooperation with the Syrian National Army (SNA) and successfully ended on March 24, 2018, six days after Afrin was liberated from the occupation of the PKK terror group’s Syrian branch, the YPG.

In harsh land and winter conditions, the operation was conducted against approximately 8,000 and 10,000 YPG terrorists stationed in the region. While the Turkish Armed Forces (TSK) and SNA took all the possible measures not to harm civilians and residential areas, the terror group tried to use civilians as shields in order to prevent the operation.

During the operation, the YPG also targeted residential areas including mosques, schools, hospitals, restaurants and houses in Turkey’s southern border provinces Hatay and Kilis with shelling and missile attacks, killing seven civilians and injuring at least 124.

One of the most important milestones of the operation was the liberation of the strategic Bursaya Mountain on Jan. 28. YPG terrorists had used Mt. Bursaya to target civilians in the center of Turkey’s Kilis province and Syria’s Azaz district through mortar shells, artillery and missiles. Following that, the TSK and SNA captured other important residential areas including Bulbul on Feb. 1, Rajo on March 3, Shaykh al-Hadid on March 4 and Sharan on March 6. Between March 8 and March 9, the TSK, alongside the SNA, captured Jandairis and the Afrin Dam, reaching the outskirts of Afrin on March 10. By March 13, Turkish troops announced they had surrounded the city.

President Recep Tayyip Erdoğan in a ceremony on March 18 to commemorate the Çanakkale Victory and Martyrs' Day announced that the city center of Afrin was completely taken under control after it was cleared of the YPG terrorists.

After six town centers, 282 villages, 23 strategic mountains and hills and one dam were captured by the TSK and SNA, Turkish officials and nongovernmental organizations (NGO) rolled up their sleeves to revive the daily life in the region and started to deliver aid packages to civilians in the area.

Thanks to the measures taken by Turkish security forces, civilians, who had to flee the region due to the terror group's oppression and the following military operation, started to return to their homes on March 20, 2018. Since then, the population of the district reached 350,000 with rapid improvements in the region's infrastructure.

The priority of the post-operation period for Turkish officials has been to strengthen the security of Afrin, enable the return of civilians and normalization of daily life.

In search and scanning activities, military bases and ditches built by the terror group and mines and other explosives planted by terrorists were destroyed. In the district, seven local councils have been established to represent democratic rights for the local people. Local councils support various fields and activities including agriculture, industry, trade, culture, sports, health and education for the normalization and revival of life.

In the field of health, a hospital with a capacity of 100 beds and 13 branches was reopened thanks to Turkey's efforts. In the district, a total of five hospitals and six health centers provide free health care services to the local people.

While more than 65,000 students in 263 schools are taking education in Afrin and surrounding residential areas, 135 mosques are open to the people's service following reconstruction activities.

Despite all these positive developments, the YPG terror group continues to target residential places and civilians in Afrin, by using Tal Rifaat, located in the southeast of Afrin, as a base.

Local people living in areas held by the YPG have long suffered from its atrocities, as the terrorist organization has a notorious record of human rights abuses, ranging from kidnappings, recruitment of child soldiers, torture, ethnic cleansing and forced displacement in Syria. The YPG has forced young people from areas under its control to join its forces within the so-called "compulsory conscription in the duty of a self-defense law." Under this practice, young people between the ages of 18 to 30 are forcefully recruited for nine months, with the possibility of an extension, if necessary. Those who refuse to join the group "face serious repercussions," including imprisonment.