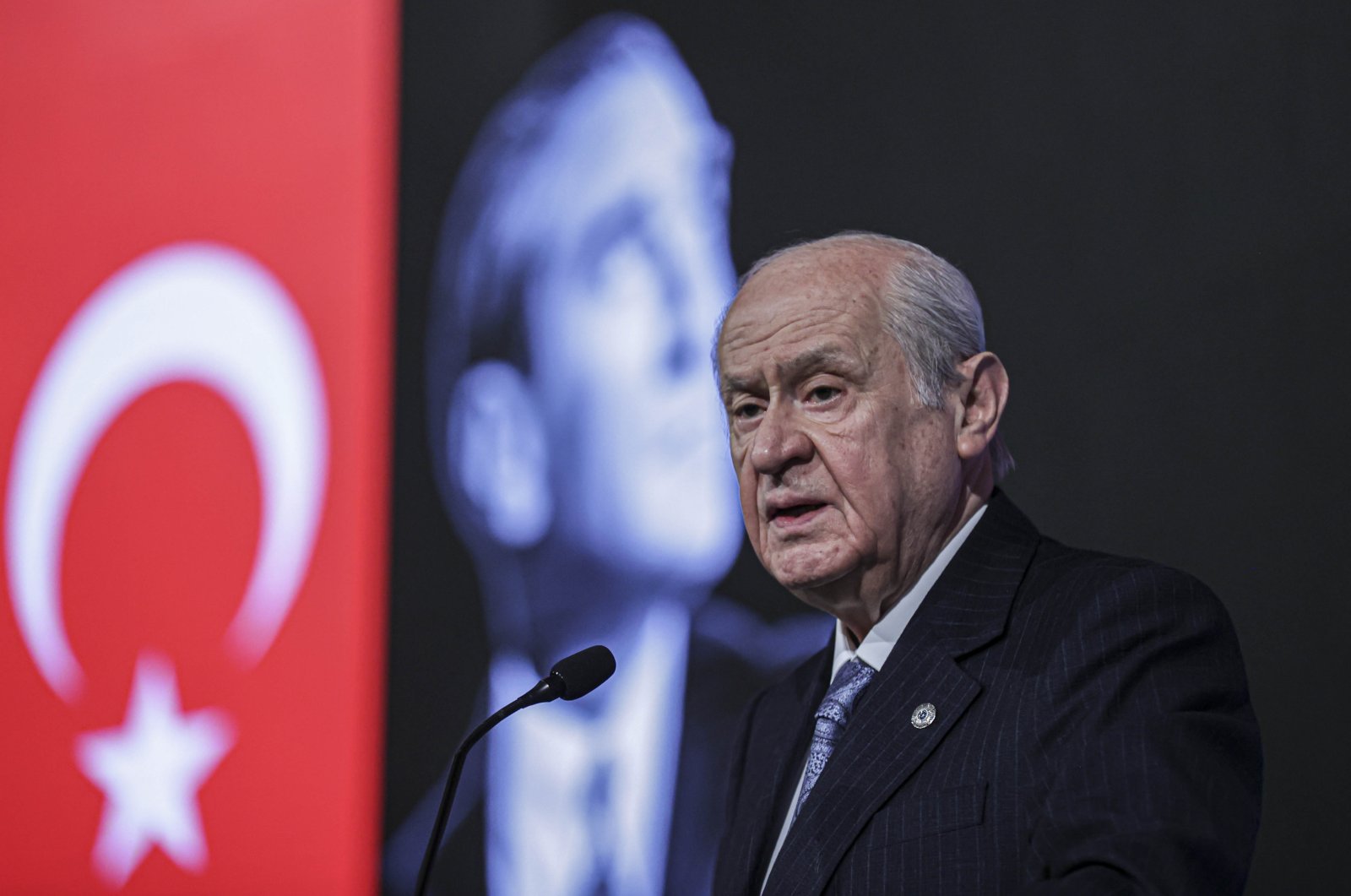 Nationalist Movement Party (MHP) Chairperson Devlet Bahçeli said his party does not want terrorists in Parliament, in response to the photos of a pro-PKK Peoples’ Democratic Party (HDP) deputy with a terrorist.

Speaking at his party’s parliamentary group meeting in the capital on Tuesday, Bahçeli said they do not want to see terrorists in Parliament.

“We cannot tolerate seeing the HDP in Turkey’s political and democratic sphere, not even for a second,” he said, adding that they expect the Constitutional Court to take action.

He continued by noting that the HDP chooses to side with terrorists who open fire on Turkish soldiers and then tries to preach lessons on democracy, freedoms, human rights and peace “with no shame.”

He also strongly criticized politicians from the opposition-led Nation Alliance, who fail to condemn PKK terrorism without referring to the terrorist group, calling them insincere in their criticism.

Both the MHP and the ruling Justice and Development Party (AK Party) criticize the Republican People’s Party (CHP) and Good Party (IP) politicians for refraining from mentioning the PKK terrorists, allegedly in order to appeal to the HDP.

For instance, IP Chairperson Meral Akşener said she extended condolences to the families of soldiers killed “as a result of an explosion” in Şanlıurfa province on Jan. 8.

“It is not really clear what exploded there, and who detonated it. There is not a single word referring to the PKK or the YPG,” Bahçeli said.

Meanwhile, PKK terrorist Volkan Bora, code-named “Koçero Meleti,” whom the HDP lawmaker claimed was her fiancee, was one of the perpetrators of two terrorist attacks in Adıyaman province. He was part of the terrorist squad that killed Gendarmeri Corporal Müsellim Ünal and soldier Mücahit Şimşek on June 24, 2016, and village guard Yusuf Sönmez on Sept. 9, 2016.

Bora was killed in an airstrike by the Turkish military in rural Adıyaman province in 2017. The photos were discovered during investigations.

Güzel defended the pictures, claiming that she had been engaged to the terrorist and the photos were being used as propaganda to target her.

Parliament Speaker Mustafa Şentop on Monday also slammed Güzel, as he demanded that her legislative immunity from prosecution be revoked.

CHP Group Deputy Chairperson Engin Altay said his party did not see any terrorist ties – for whatever reason – as legitimate.

“We do not consider the terrorist ties of any party as valid,” he said Monday.

The HDP has been accused of having close ideological and political links with the PKK terrorist organization, which was founded in 1978 and has been conducting terrorist attacks against the state since 1984. As a result of PKK terrorism, nearly 40,000 people have been killed in more than three decades. Currently, the HDP's former co-chair and presidential candidate, Selahattin Demirtaş, is in prison for terrorism-related charges.

The indictment accuses HDP leaders and the party's members of acting in a way that flouts the democratic and universal rules of law, colluding with PKK terrorists and affiliated groups and aiming to destroy and eliminate the indivisible integrity of the state.