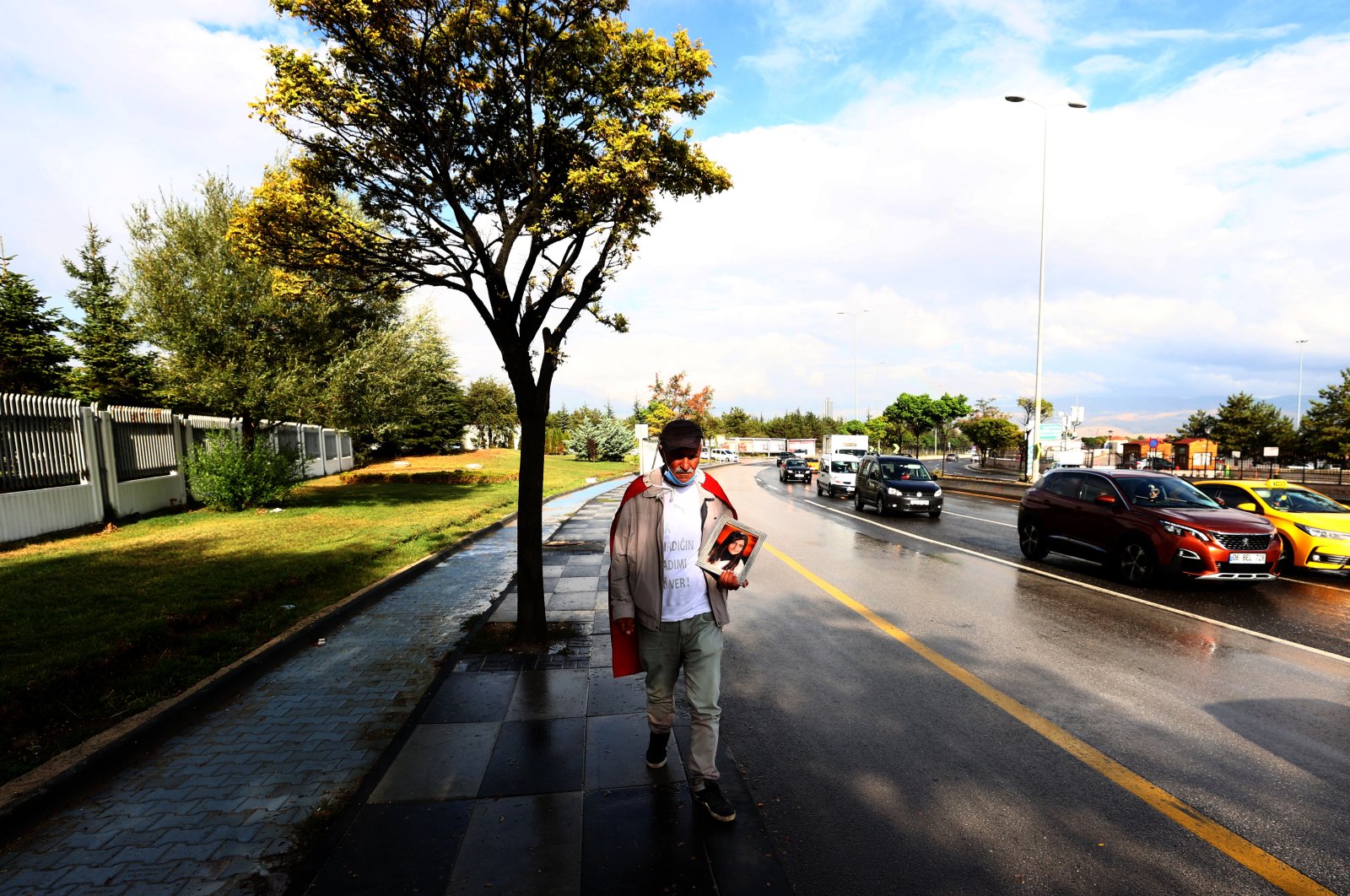 Mehmet Laçin marches toward the Constitutional Court in the capital Ankara to protest his daughter's abduction, Turkey, Sept. 16, 2021. (AA Photo)
by DAILY SABAH Sep 16, 2021 9:45 am
RECOMMENDED

A father protesting his daughter’s abduction by the PKK terrorist organization facilitated by the pro-PKK Peoples’ Democratic Party (HDP) called on authorities to halt treasury grants to the party, while another parent urged her son to return home.

Father Mehmet Laçin, who marched to Ankara from Izmir, called on the government to cut funding to the party as it cooperates with terrorists, Anadolu Agency (AA) reported Thursday.

Laçin's daughter was kidnapped by the HDP in Kocaeli province when she was 14 years old. He noted that he found his daughter but party officials beat him up as he attempted to bring her back and he was unable to find her again afterward.

“It turned out that they held my daughter at the HDP Istanbul headquarters for four years of training, held her against her will and then transferred her to Diyarbakır headquarters to send her to fight for the PKK in the mountains,” the father said.

He explained that he decided to walk from Izmir to Ankara to raise awareness and take action against the HDP.

“I’m calling on the Constitutional Court. The HDP abducts our children with the funding they receive from the treasury,” Laçin said, stressing that if their funding is cut they will not be able to carry out further abductions.

He continued by suggesting that the funds allocated to the HDP be given to the parents protesting their children’s abduction instead, as he pledged to continue his protest until his daughter's return.

Laçin's daughter was taken from the family in 2008.

The walk is not the father's first attempt at getting his daughter back. He explained that he had traveled to the southeastern province of Diyarbakır when he found out about the families protesting to get their children back outside the HDP's provincial office. Laçin stayed at the Diyarbakır protest for seven months before he was forced to return to Izmir due to the coronavirus outbreak, though he later returned to Diyarbakır.

“My son was attending university when he was deceived by the HDP,” she said, noting that her son Mehmet was a journalism student at Ege University.

“It’s been two years and we want our children from the HDP and the PKK,” the mother said, as she condemned the terrorists for stealing her son’s future.

She called on the HDP to return her son and said she will continue to protest until everyone’s children return home.